I'm having a hard time understanding how money works in Payday 2, it was way more simple in the first opus.

In a mission's preview, you can find different amounts of money: 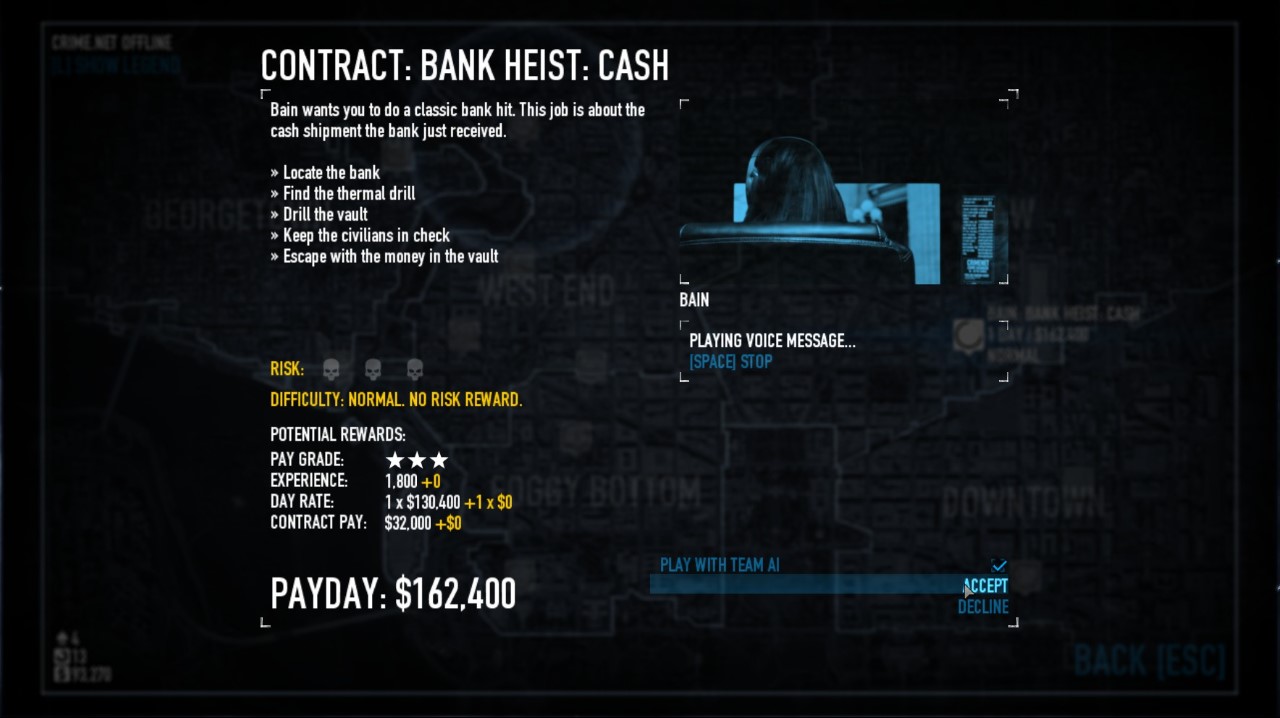 Once the mission is complete, you get a debriefing screen with two sections: 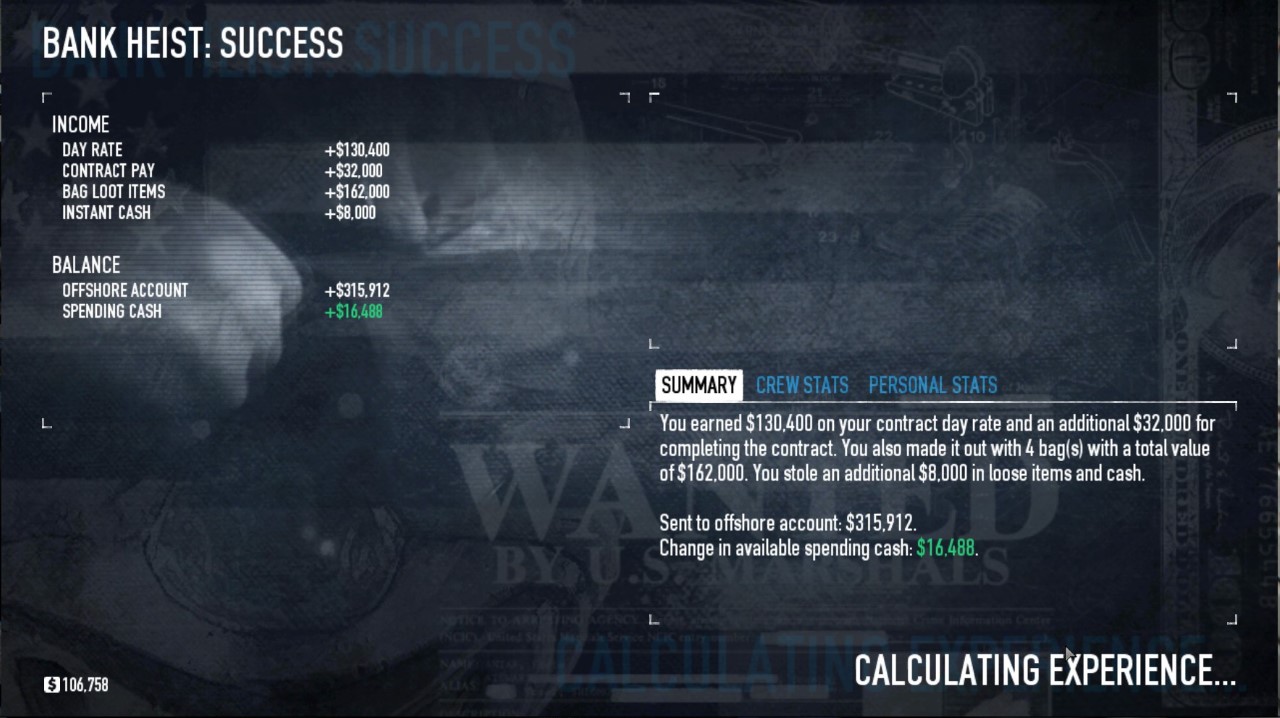 The day rate and contract pay don't differ from the first screen, even if I have no idea of what it is exactly. Then there are the bag loot items (if looted all the bags during the mission) and more I-have-no-idea-what-it-is stuff like the instant cash, the offshore account.
And, finally, the only amount that is revelant to me, the spending cash (in green) which is what you actually get in your wallet after the mission.

In addition to all that, my friend and I are receiving different rewards at the end of each mission (I always receive a few thousands more than he does): we checked and we don't have skills that impact missions rewards... I just have a few more levels.

Sooooo... Any idea what are all these stuff and how the final instant cash is calculated ?

So far, from what I could read online (in this guide and on the wikia, among other sources):

The pay grade for a mission indicates how much cash players can expect to get out of a mission -- source.

Also this thread suggests it can go up to 10 stars.

The dayly income rate is a cash reward with a multiplier for the day a heist takes (e.g. 1x in The Bank Heists and 3x in the Rats Heist) -- source.

The contract payment is a flat amount of cash reward based on the number of white stars (pay grade) -- source.

The overall payday is the sum of the other two cash rewards (pay grade and contract pay) and will be shown on the map if you select a heist -- source.

Yellow bonuses
These bonuses come directly from the difficulty (or "risk") of the mission, pictured by the yellow skulls on this very same screen. Normal = no skull -- overkill = 3 skulls.

Instant cash and bag loot items
The instant cash it the one you loot and put in your pockets directly during the game (jewels, cash bundles, ...) The bags are those heavy packs of money, jewels or even drug you'll have to carry in order to achieve a mission.

Balance
This section contains the sum of all the amounts contained in the Income section ($332,400 in the example given in the question) distributed between two type of accounts: the offshore account and the spending cash.

Since August 30 2013, you can use your offshore account to directly buy specific missions from Crime.net.

Spending cash
The cash you get, finally. In the given example, it's 10% of the total amount, but so far I couldn't find any precise calculation to know if that percentage can vary or not.

This is the offshore account money and 10% of that becomes you spendable cash. -- source.

I'm aware this question already has an answer, but as this is the top link when googling "Payday 2 Cash Earnings" I thought I'd throw in a bit of info on the current state of the Change in available Spending Cash (Patch 25.1) 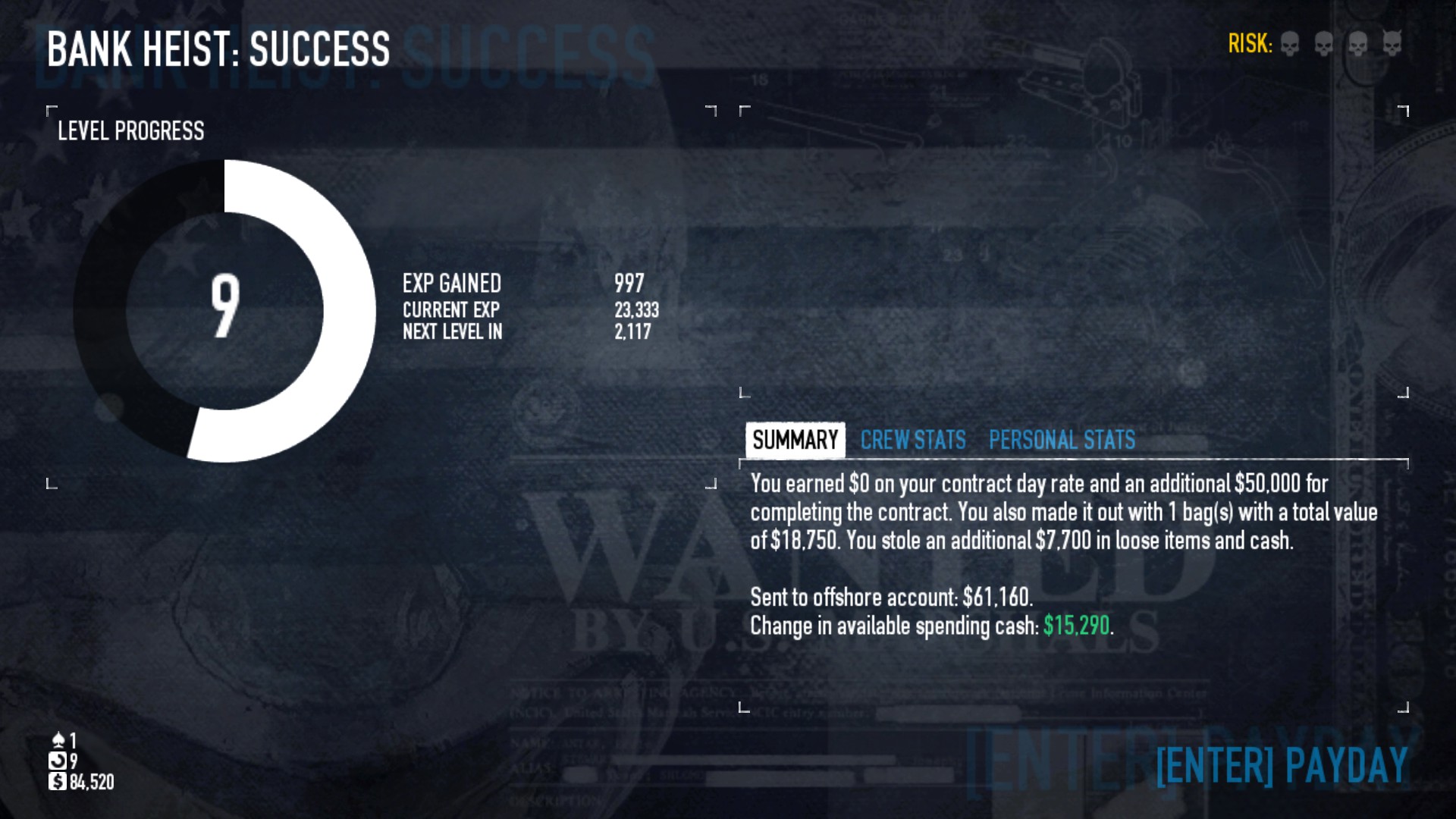 Which equals a 20% Cut of total earnings.

So it would appear they've tweaked the Spending Cash further since previous answers.

A little addendum for Spending cash

You're right Anto, the rate is currently ~5% (from off-shore cash to "normal" cash).

In the Baine's guide, Baine suggested that the rate could vary in the future.

This answer is accurate for patch 31.2 on the PC. 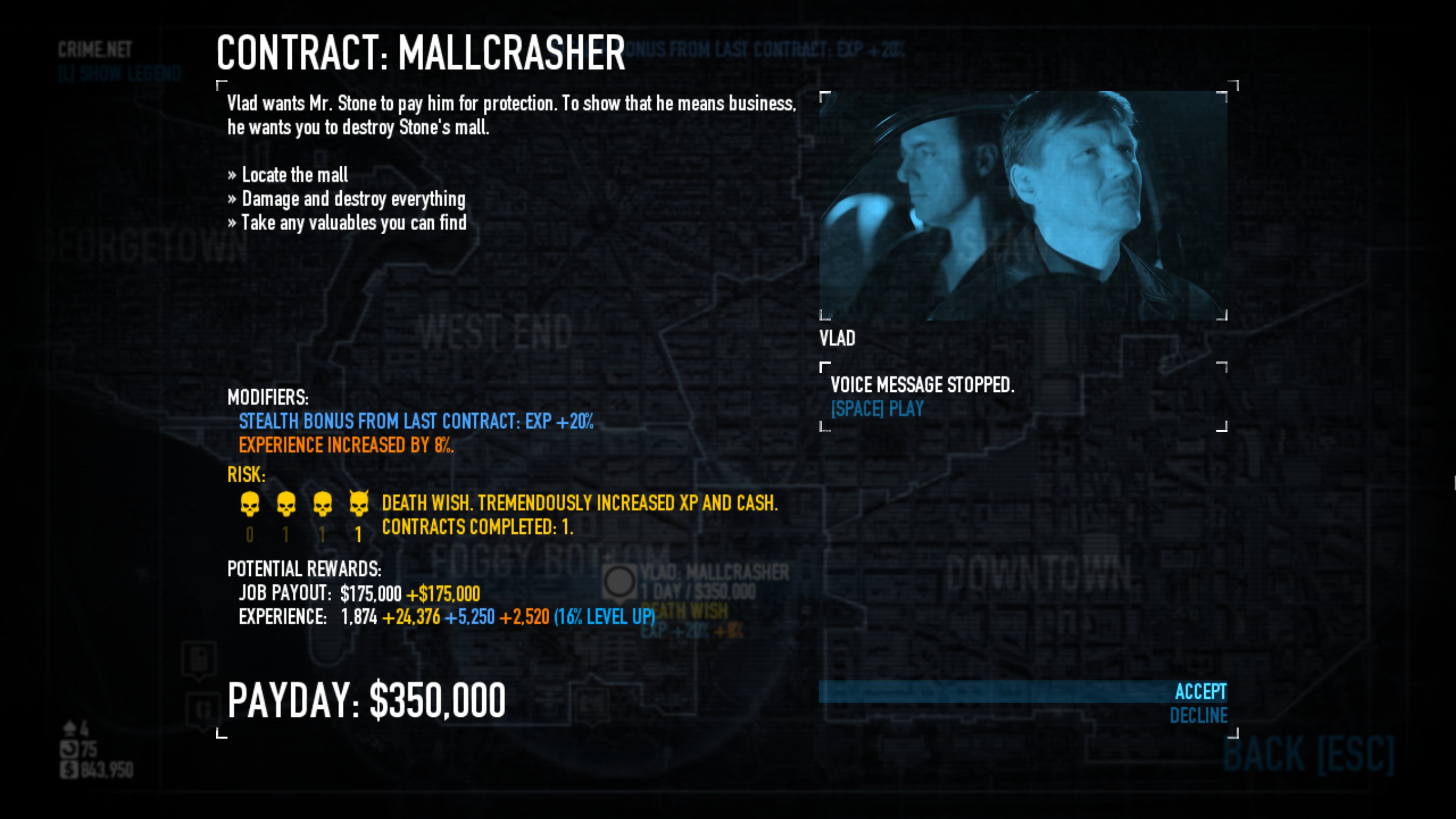 Completing a mission in stealth adds an EXP bonus of varying size for the next job. (+20% in the example above)

Avoiding a mission for a while adds an EXP bonus to the job. The longer you avoid it, the bigger the bonus, up to a cap of +50%. Doing a mission too often will cause it to get an EXP reduction, which caps at -100%, which stops you from getting EXP from the job completely.

The number of highlighted represents the difficulty, or risk level, of the job. No skulls means normal, one skull means hard, 2 skulls means very hard, 3 skulls means overkill and 4 skulls means death wish. The game also counts how many times you have done a job on a certain difficulty, which is shown as a number below the corresponding skull (hard to death wish in order from left to right). The selected job's difficulty is also written to on the right side of the skulls.

Pay grade, day rate and contract pay have since been scrapped and combined into a new job payout value

As you can see in the , lists the base payout you are guaranteed to get for completing the job1. It also separates the base amount for doing the job on normal and the additional reward from increased risk. Bags and instant cash are added to this amount at the end of the job, in debriefing.

Lists the experience you will gain for completing the mission. White number is the job's base amount on normal, yellow number is the EXP added by the risk level, blue number is the stealth bonus from last contract and the orange number is the EXP bonus for avoiding the job for a while (and red would be EXP reduction for doing the job too often). It also tells you how close to a level up it will get you (blue percentage in parentheses).

This is the result of the calculation (base + risk) in Job Payout, and represents the same thing. 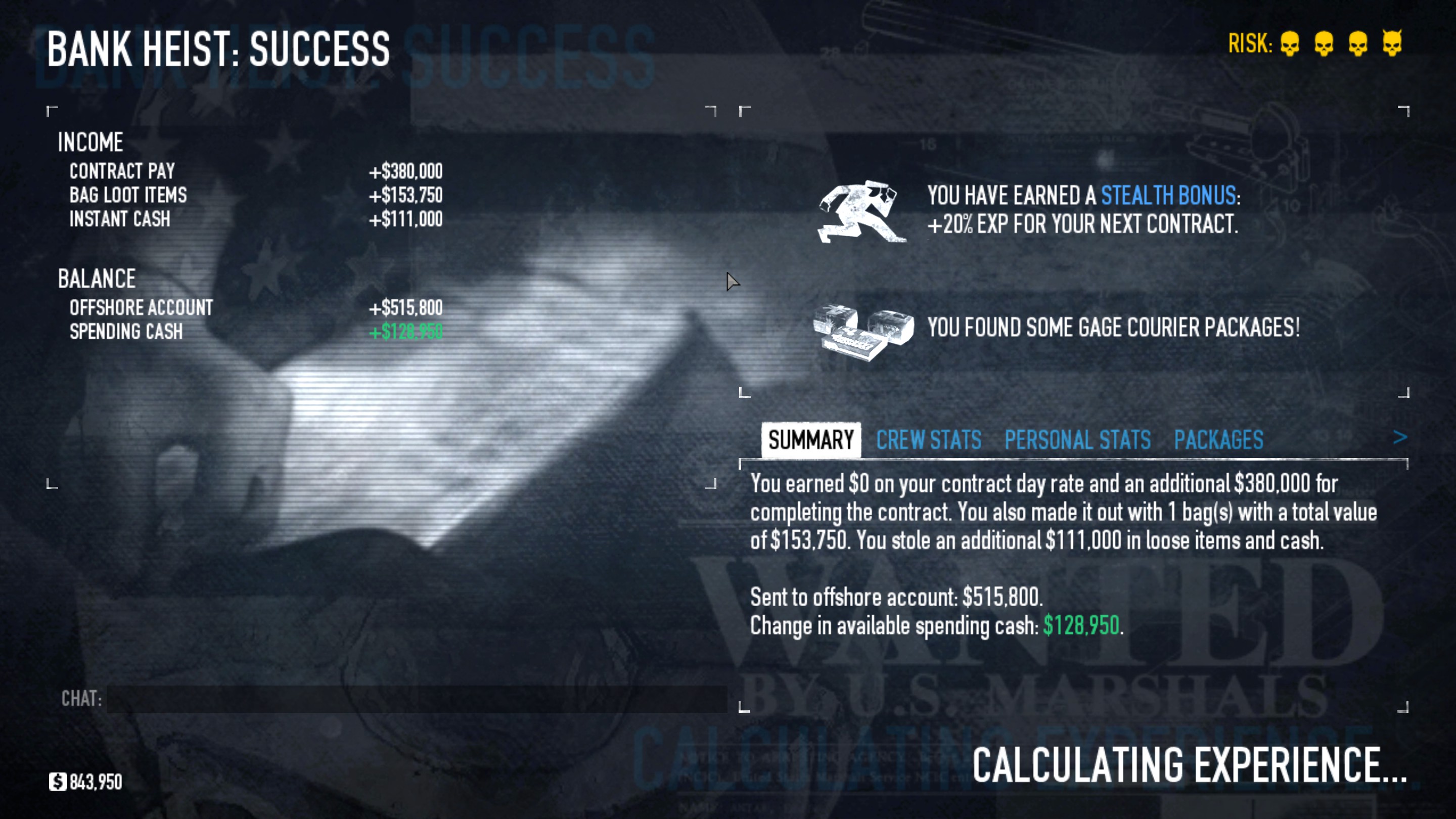 Same as Job Payout and Experience in the briefing screen.

If playing with others, and more than one is alive at the end of the job, you will get a bonus to the total payout. The more people survive, the more money you earn.

Money earned from clutter and small items picked up during the job. This includes things like single pieces of jewellery, single gold bars, rings, etc. Everything you just press to loot instead of carrying it to the loot drop-off point.

Money earned to the offshore account. This is 80% of the total cash2. This money can be used to buy contracts and advance infamy, when you reach level 100. Sometimes you can also use this to buy instant paydays to earn masks, mods, etc.

Earned money that you can spend. This is 20% of the total cash2 and can be used for assets, mods, weapons, skills, etc.

1Killed civilians are immediately deducted from your spending cash as you kill them and do not affect the job payout. As a result, killing civilians has no penalty if you have $0 spending cash when starting a job.

I've found that the higher the level you are, the more your income is at the end of a heist.

0
How does the mission's documents/intelligence work?
0
How does reloading work?
3
Will new civilians spawn mid-mission? (Or: I'm out of cable ties, can I just kill everyone?)
8
How exactly does suppressing enemies work?
7
How does the "Fully Loaded" ace work?
1
How can I fix the glitch, Hud_Hint_Clean_Block_Interract
11
How does "Dodge" really work?
1
How do the additional guards work in Framing Frame day 3?
3
What is the purpose of the picture in the deposit boxes on Firestarter?
2
What mission gives the most money the fastest?