What is the point of trade steering?

I read a lot about trading in the ingame hints, but still cannot figure this out.

When I send a merchant to a trade node, I have the option to collect money from the node or to steer the trade "uphill" to another trade node.

What advantages do I get by trade steering? If I send someone to this trade node, is it not equally good to collect the money there right away?

Does it always make sense to steer trade between two nodes I have merchants in?

Trade steering is used for two primary purposes. To move trade from areas where you have low power to areas where you are dominant, and to move trade from a node to the node where your capital is to avoid taking a trade power penalty. Trade being pushed downstream occurs wihtout a merchant in nodes other than your capital, but you cannot change which direction trade flows downstream unless you have a merchant there.

Here is an example of a game where trade steering is useful:

In this game I have roughly 50 percent power in both the Tunis and the Sevilla nodes, but my capital is in Sevilla. Because of this, the best course is to move trade downstream from Tunis, which sends 2.5 gold out of 5 to the Sevilla trade node. In Sevilla, I can capture 50 percent of that trade and get a total of 1.25 gold from the tunis node, times my actual income modifiers. On the other hand, if I tried to collect trade in tunis, i would take a 55 percent penalty to trade power, leaving me with only around 25 percent power. That would let me collect only .66 gold times Actual income. Trade steering is twice as good here. If I had no merchant at all, my power would push trade downstream, but aragon would make that travel to genoa instead of Seville. I would lose out on ALL income.

This is what the trade map looks like with no merchant: 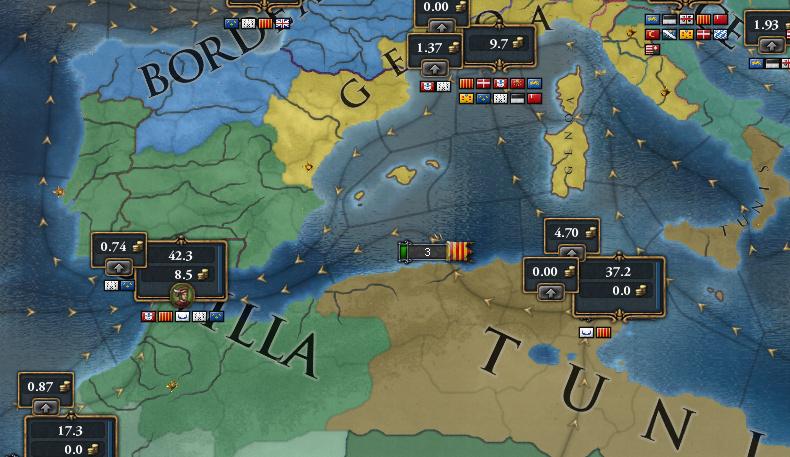 I get absolutely nothing from the Tunis trade node, because I have no merchant there. This is caused by Aragon steering trade toward Genoa.

While it is possible to steer trade upstream, it is virtually useless to use a merchant to do so because the trade power penalty is severe. Steer trade downstream, not upstream.

Instead, you should relocate your capital to a the node that is furthest downstream which you dominate, and then direct trade there.

Should you always steer trade to your capital? NO!

Usually you will want to direct trade downstream, but not always. You don't direct trade through nodes where other players/AI have a lot more trade power than you, especially your enemies.

One good example of a situation where directing trade would be a bad idea occurred in my most recent game as Netherlands. I had a large number of colonies in the Chesapeake bay node. However, if I directed trade downstream, it would have been collected by England or Norway, in The North Sea and London nodes between Chesapeake Bay and Antwerpen. Instead, it was better to just collect trade.

Many people will tell you that you should extract trade only at your capital. This is FALSE. Here is an example of how much you can pull out of a non-capital trade node, without investing any ideas in trade. This is more than even in my capital. 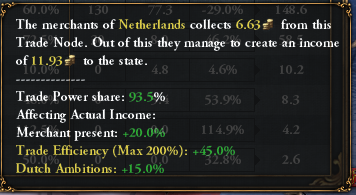 The key to note is that I control 93.5 percent trade power, even with the large penalty to trade from collecting without a capital present:

This is because the trade penalty for collecting from a non-capital node is a trade power penalty, which means if you still have a higher percent power in a non-capital node than in your capital after the penalty, you should definitely collect there

Mal's answer is correct. However the more important factor is that collecting trade is only efficient in the trade zone with your capital. If you try to collect anywhere else, your trade power in that node is reduced by between 50 and 85%.

Sending trade downstream is beneficial as more trade value is added to the trade node downstream than is send from further upstream. Therefore steering the trade as far as possible and then collecting from it is, in theory, more profitable.

I think it depends on geography, I don't think that sending trade up or down itself affects your income, because up is good and down is bad or opposite. due to my small and incomplete experience of this game, u want to place your merchant in way that they transfer power (money) from one point to place where u can collect it. In my example where I play Venice, I start from Crimea, transfer it to Constantinople, then to Ragusa and from there to Venice, notice when u open trade map view u can select sending destination. At default my merchant would transfer trade from Crimea to Kiev, which then would go to Poland and I would not benefit from it. I also think in theory longer your trade combination is more u should get in the end of the line, of course that would require number of merchants. I am sorry if i am wrong and did not get it right, just shearing my findings. Respect.

4
When is it better to collect money from a node instead of transferring it?

5
How does protecting trade work in Conquest of Paradise?
8
To which trade nodes should I send my light ships?
9
Why is trade blocked between Gulf of Aden and Alexandria?
1
What gives additional scores in the game?
1
What is the benefit of Accept Culture change?
6
How do Trade Winds work?
5
Hashed provinces on the trade good map mode
6
What is the best way to kill the current ruler?
2
What is the purpose of the Immortal trait for custom rulers?