Is it possible to install games to different hard drives?

I normally use Steam, but after purchasing the latest Humble Bundle I acquired several Origin games. My main hard drive is a 128GB SSD, but it's is almost full. I like to keep a few games I'm playing on there, and the rest installed on my 1TB secondary drive. In Steam it is simple and easy to select a game and chose which hard drive to install it to. Is there a way to do this on Origin?

The only thing I've found so far is this: http://www.howtogeek.com/howto/16226/complete-guide-to-symbolic-links-symlinks-on-windows-or-linux/

Seems a little OTT for what should be a simple procedure.

Yes, it is possible. 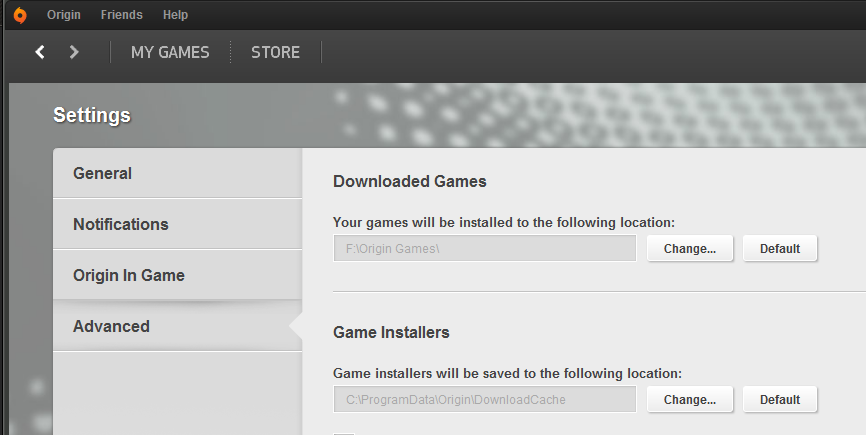 Steam Mover (as its name suggests) was written to move Steam games. However, it works by simply copying all files from one location to another, then creating a junction point where the old files used to be. This means that all you need to do is locate the bulk of the game files you would like to move, and use Steam Mover to move them. This would work for Steam, Origin, installs from CDs, anything.

As a side note, it can be used to move applications, document folders, etc. It's best set up for moving folders between two parent folders, tho, much as you would if you had a games folder on your SSD, and one on your HDD.

This is how I did it for Mass Effect 3 and Need For Speed Most Wanted from D to J:. You can modify the commands to suit your needs.

Move the game folders of the desired games you would like to migrate to another hard drive or volume.

After the folders and files themselves have been moved into the desired volume, open a console with Winkey+R - type cmd press enter and use mklink in the newely opened cmd console window to make a so called symbolik link between the old and new folder locations, like this:

Don't forget double quotes if you have spaces in the folder names and the /d switch.

This basically tells the Windows OS to use a symlink, and thus this "trick" works application-wide.

After this in the Origin UI the "Play" button becomes again available for the desired games, eventhough, they now reside on another HDD/SSD volume.

4
Can I install only 1 of Origin games to another drive?

33
How can I change the Install Directory of Games in Origin
5
Can I preload games on Origin?
6
Remove games from origin list
6
Can I install games obtained via Steam in Origin?
1
If I buy games via the Origin store do I need to install it?
4
Can I install only 1 of Origin games to another drive?
1
does origin re-download games for each account?
0
Is it possible to extend your Origin gametime?