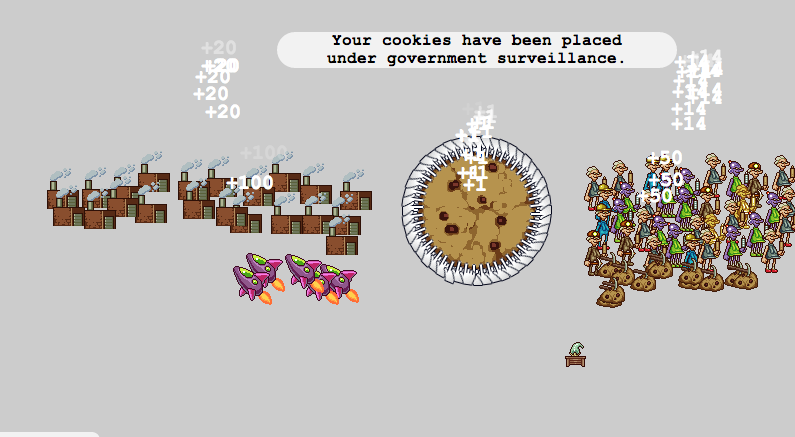 In 1.0 and later, it's largely through doubling upgrades.

Once you enter the Grandmapocalypse by buying One mind, part of the grandmas' production actually becomes quadratic (O(n^2)) because the base rate for each grandma includes something multiplied by the number of grandmas, and that in turn is multiplied by the number of grandmas. With more than 40 grandmas, the majority of your production is from quadratic effects.

This is the relevant code for the Grandmas in Cookie Clicker Classic:

That confirms Sconibulus' idea that it might be related to the amount of available items. That said:

The Portal itself adds 5 cookies. If you have a Pledge on top of that, you gain an additional .5 per portal.

The Grandmas produce the applicable sum of cookies every five seconds.

The formula changed completely in 1.0.

Not the answer you're looking for? Browse other questions tagged cookie-clicker or ask your own question.

12
What causes the milk percentage to rise?
16
How do Golden Cookies work?
19
How many grandmas is enough grandmas?
1
How do you make more Golden Cookies appear in Cookie Clicker more often?
0
How do you get angry grandmas in cookie clicker?
1
What are the strongest combinations of Pantheon Spirits for AFK?
10
How does Cookie Clicker's stock market work?
1
What plants have random drops as of version 2.031 in cookie clicker?