How do you throw a gas can very high and/or far?

In Scavenge multiplayer mode (and its variants), I've witnessed players throw gas cans much farther and higher than I ever could. I've wasted prescious time running, jumping and left-clicking to throw my gas can high and far, but I've never been able to reproduce the effect...

What am I missing? Is it some arcane combination of mouse movement/clicking? I'm looking for a canonical answer, here, i.e. I want a step-by-step "idiot's guide for dummies" for throwing a gas can high and/or far.

After testing this, the trick to throwing gas cans involves shoving the gas can as soon as you throw it:

The timing between MOUSE1 and MOUSE2 is about a tenth of a second. You'll know you did it right if you see the gas can more "flung" into the air (meaning it spins a bunch).

Jumping is optional, as it adds a little height to the throw, but doesn't contribute to distance nearly as much as shoving the can.

A note to those who want to practice this: don't do it on survival. The shove doesn't work on gas cans in this game mode, and after you shove it three times, it explodes into a flamey-gasoliney mess.

To put it in a simplified graph that also doubles as a masterpiece work of art: 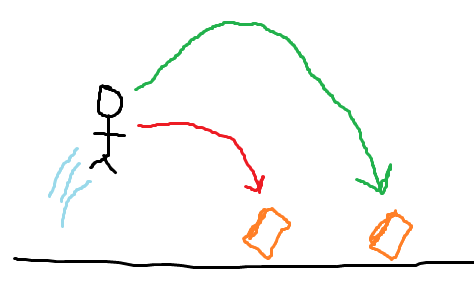 This illustrates the importance of aiming upwards vs aiming towards the horizon.

Not the answer you're looking for? Browse other questions tagged left-4-dead-2 .

9
How can you make your player scream in Left 4 Dead and Left 4 Dead 2?
6
Can you play L4D in 3rd person?
19
How can my friends and I improve our tactics in Left 4 Dead 2?
1
How can I rename my player?
4
Can you get the Guardin' Gnome achievement on Easy difficulty?
17
Can you cut a smoker's tongue after it wraps around you?
2
How can I distinguish my team from zombies in L4D2?
4
How can you force your character to say stuff in Left 4 Dead 2 (post 2015 patch)?
4
How can I manage trolls and griefers?
8
How can I crown a Witch that is standing and wandering around?