Earlier, I was able to invade Crete by sea from Morea (near Athens on the southern tip of Greece) with two infantry simply by selecting them and right-clicking on Crete as you would normally, I assume because I had a small fleet of three Galleys and three Cogs. It even showed them move first to the ships and then--after a short delay--onto Crete.

But now I've just conquered Venice and am trying to return home to Dalmatia via the Gulf of Venice. I have a large fleet in the gulf and control both provinces. When I select the army and right-click on Dalmatia, it makes sound like it will move but doesn't do anything. 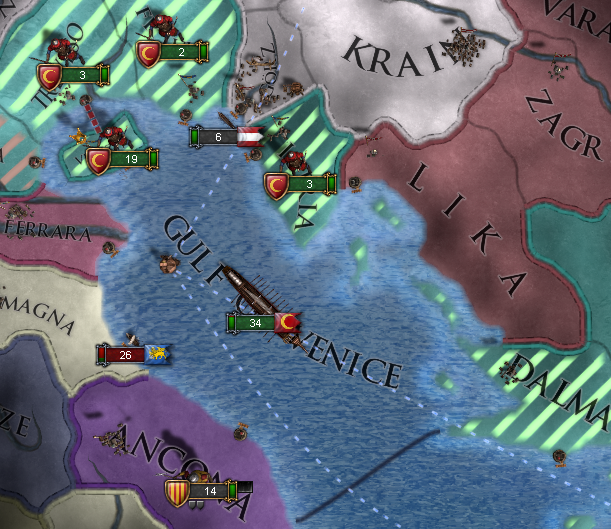 There are a few things I suspect may be blocking the convoy:

Your answer 3 is correct.

You either need to have enough transport ships to move the entire stack at once or you need to split your army into chunks that fit onto the amount of transport ships you have.

If you have 19 troops and 15 transport ships, you will need to split your forces and send one batch of 15 or less across, then send the remainder.

19
What is the point of trade steering?
5
Attack coastal provinces with ships?
7
What to do with all this gold?
5
Creating own route for troops
1
What gives additional scores in the game?
6
How to reduce sea attrition in Europa Universalis 4
5
How do I explore unknown land (terra incognita)?
4
What determines where armies can move?
0
What happens after year 1821?
1
Can a province be considered neighbor if divided by a sea?