How can I safely dig straight down?

I know you should never dig straight down but there are rare occasions where I don't really want to make a slow mine downwards. Sometimes I just want to dig down, find diamonds and come back up with the satisfying thought that I just found a vein of diamonds but half the time I end up falling into lava or a ravine to my death.

So, are there any tips to dig straight down so I can start branch mining?

I would also like the method to be efficient and less risky than digging a 1x1 hole down to level 12.

If you really need to dig down as fast as possible while still being safe from lava dives you can dig a 1x2 hole down.

This is exactly as easy as a 1x1 hole, except for the positioning in the beginning. If you stand squarely between two blocks, mining one won't make you fall until you mine the other, allowing you to see what's below. The picture below shows a good postion, the mouse is also correctly placed so that you don't have to move it to mine both stones. 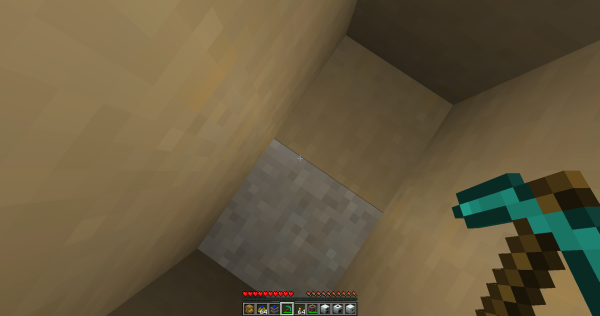 If you position your pickaxe right on the edge of the two blocks correctly, you'll mine one block after the other and slowly descend into the depths. After mining a block it looks like in the picture below. 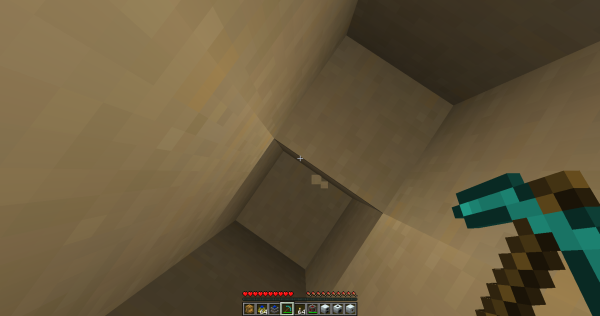 If you see a pit or lava instead of another block on the side you just mined, you can throw in gravel or sand to fill it up, or try digging around the hazard.

When you end up with lava below it'll look like this: 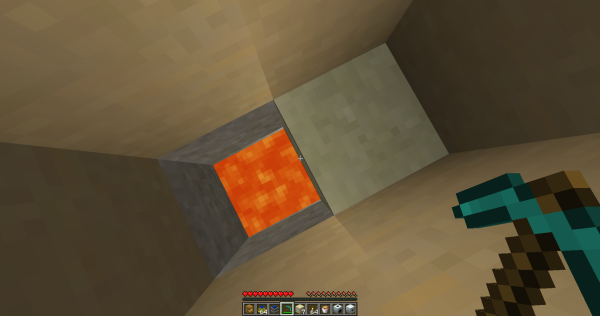 To do this safely you'll need to make sure you can stop mining at any second, so no efficiency V diamond pickaxe nor doing this in netherrack with anything better then stone.

Small note: don't mind the weird textured kinds of stone and blocks in the pictures, they are from a couple (different) mods.

Place water at the top of your to be 1x1 hole, place a torch each time you wish to breath, and use Aqua Affinity on your helmet so you'll be able to dig faster.

Stand on a ladder, dig down until you can't hit any more blocks, drop down, and then remove your ladder so that you can place it again.

This will be safer than standing on the block you're mining, but dangerous in that you could lose all your blocks down a ravine or in lava. You may also get stranded if you don't bring enough ladders to get out and run out of pickaxes, so keep that in mind.

Or you can make a 2x2 staircase down if you plan on using it later.

However I am guessing you want an early game method.

My favorite is to simply use stone picks, with nothing else in my inventory. This is actually very fast, and the risk is minimal - you don't lose much. And it's not hard to clear the lava with sand, then ride back down on a wave of water (place the water, wait a second, grab it, jump in).

But if you wish to avoid death you can save yourself in some situations with a water bucket. Simply place the water against the wall the moment you hit lava, with some practice you will be able to swim up out of the lava using the water (which also protects you from damage). Then simply mine out the block to the side of the hole and get out of the water. This requires a lot of luck, but it's a good fail safe.

Since Minecraft is 3D, you should never dig straight down. It's the #1 rule. It is unlike Terraria, which is 2D, where you can see what is below you, but that's a completely different game. If you have to, I would recommend filling your hole with water and mining air pockets as necessary.

36
How can I safely explore far away from my spawn point?
29
How do you safely remove TNT?
3
How is the straight line drawn?
0
Can I safely switch computer on LAN?
2
How to make straight flying arrows in vanilla Minecraft?
2
How to safely destroy silverfish blocks?
1
How can I slow down Minecraft?
3
Only arrows with names fly straight
0
Can't dig in minecraft