Connection to capitol without port

Should I have a connection to the other group of cities? In this situation, I did not, as my cities were disconnected when I stopped being friends with the previously mentioned city state. 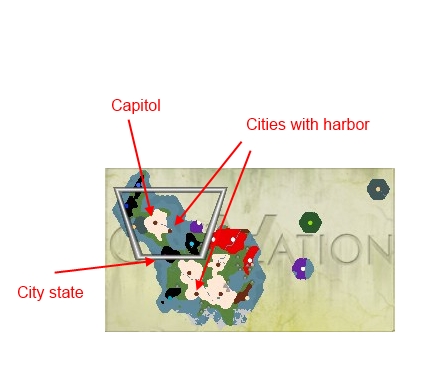 The trouble is that you haven't explored a sea route through uncontrolled areas. Your "invisible trade ships" aren't willing to go into unexplored water to connect your empire together, and aren't able to go through territory that belongs to someone else. Looking at the map, the city-states in the northwest and southwest of your known territory might cut off the straight-water-route between your two harbored cities; the gray civilization (Germans?) to the west of your capitol might also be a problem, if they own all of the water tiles you might go through. You either need to make nice with those two city-states and the gray civilization, or invent Astronomy and expand your knowledge of the Ocean tiles with a Caravel so that your trade can route around the hexes claimed by the blocking city-states and civilization.

Alternatively, you can found a city just east of the labeled city-state in your map, on the water, and put a harbor there. Then your "invisible trade ships" just need to cross a short bay instead of navigating the long way around the continent. (This will depend on whether the city-states to the south and southeast of your capitol own all of the sea hexes on the south end of that bay. You may need to buy a couple of sea hexes quickly to make sure the city-states don't block your access later.)

4
What are the requirements for harbors to connect to your trade route?

40
What is the formula for city connection income?
23
Is there any way to see Civilization V's civilopedia without activating the game?
9
Can one remove a courthouse without suffering unhappiness?
4
Is there any way to win without relying on science?
20
Is Infinite City Spam a good strategy on Immortal/Deity in Brave New World?
6
Can I own land without having a city nearby?
3
Units without maintenance cost
4
What are the requirements for harbors to connect to your trade route?
6
Connect capital to city-states quest, do sea routes count?
2
How did Austria expand to 4 tiles away without a citadel?