How can you activate a piston array from below?

I'm looking to make a large round table which would come up from the floor when activated by pistons.

I've attached an image to show exactly what I'm doing. I've tried putting blocks underneath attached to my red stone torch and wiring it up but I cant get to the middle blocks. It would be nice to find one method that can be laid out and activated so that the blocks above are activated. 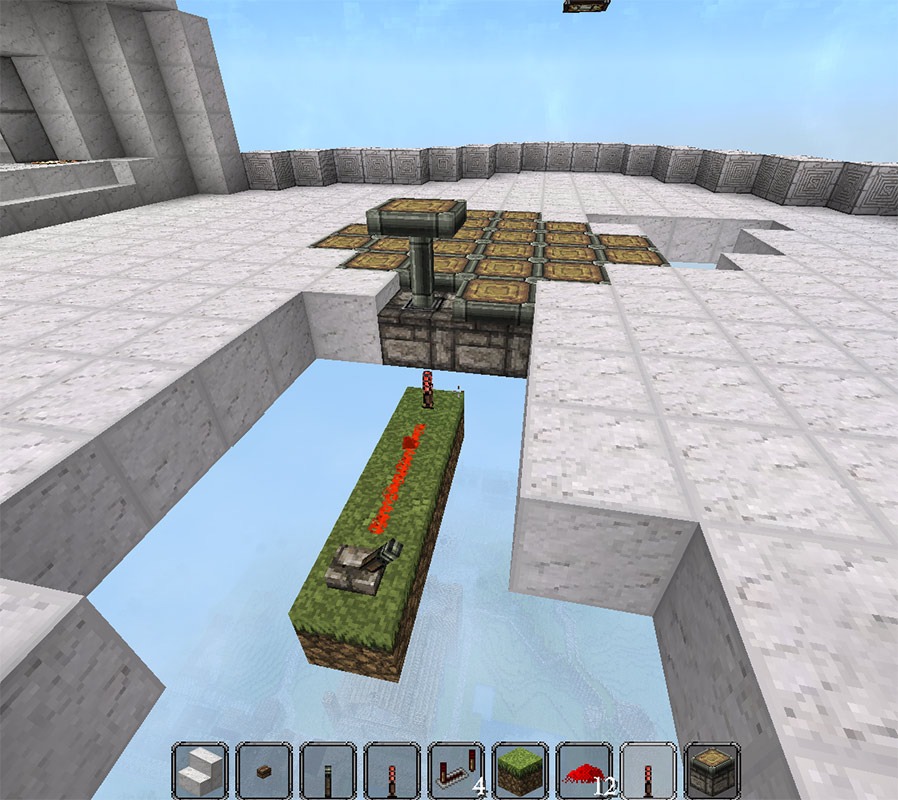 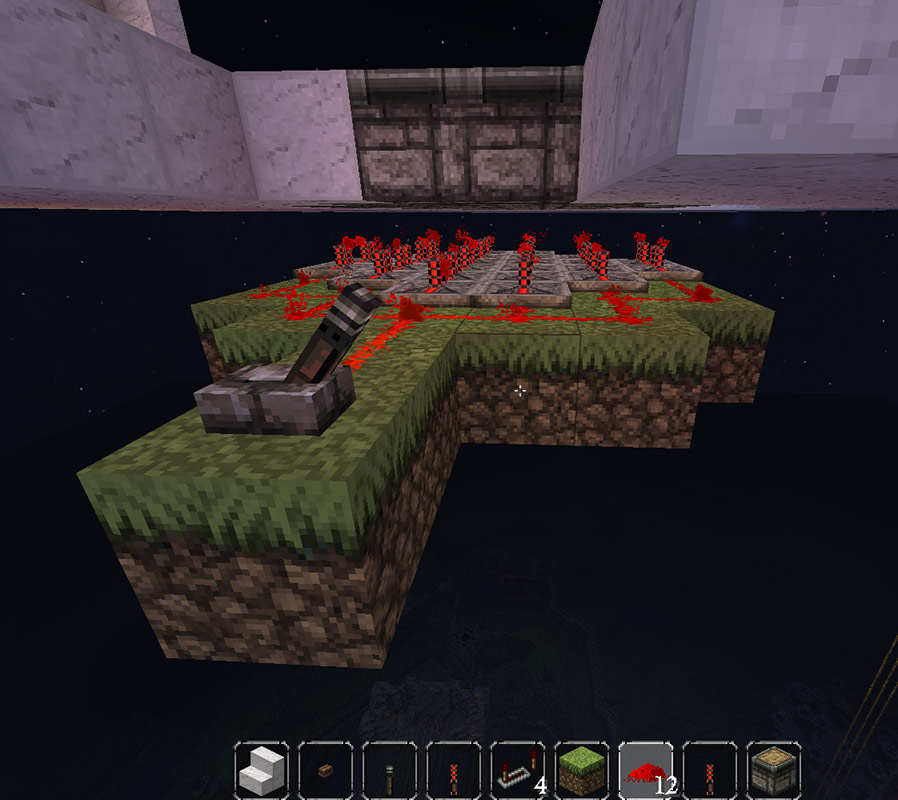 You have to do it in three dimensions, with multiple layers. You need one layer of circuitry for each ring of the table. Since you have a table that has three rings, you need three sets of circuits that generate the right signal in the right pattern. Each ring after the first needs to be down a layer so there's room to do the wiring, and then you have to carry the signal upward with vertical redstone torch connections.

This is an overview shot of a working implementation that I just made: 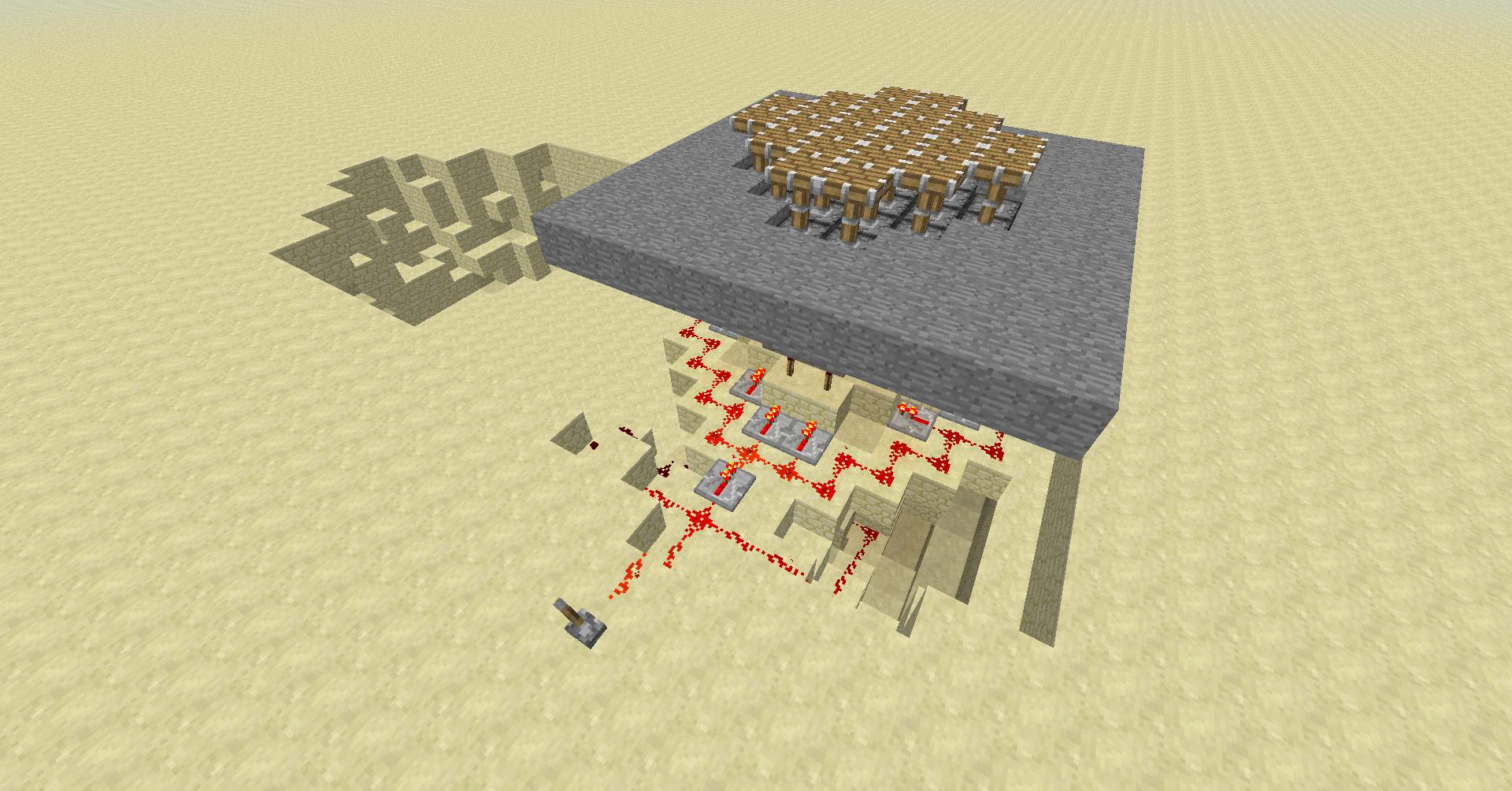 And here's a long view of the wiring layers: 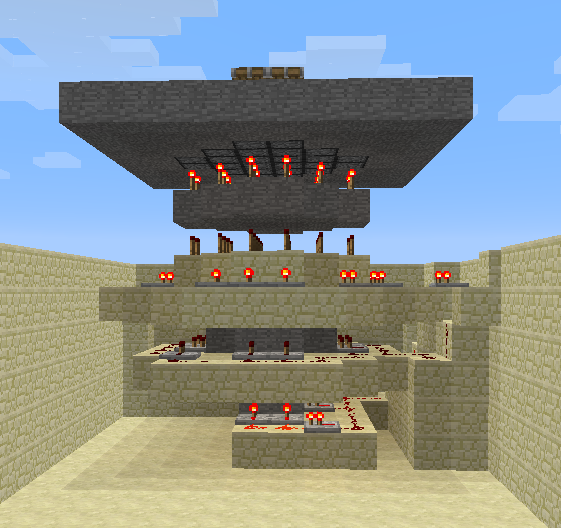 The first set of torches are the activation torches for the pistons. (These are actually redundant*.) Each ring of torches is toggled on by wiring, so they have torches below them to keep them off until the switch is thrown.

The second set of torches from the top are part of the out ring's circuitry. The repeater ring around the second layer of torches turns them off, which turns the redstone torches in the layer above on, which activates the outer ring of pistons. The repeaters are hooked up directly to the main switch.

(Each layer of redstone torches also contains torches for the inner rings, because those are the connections that will let us bring the signal up from the lower circuits.) 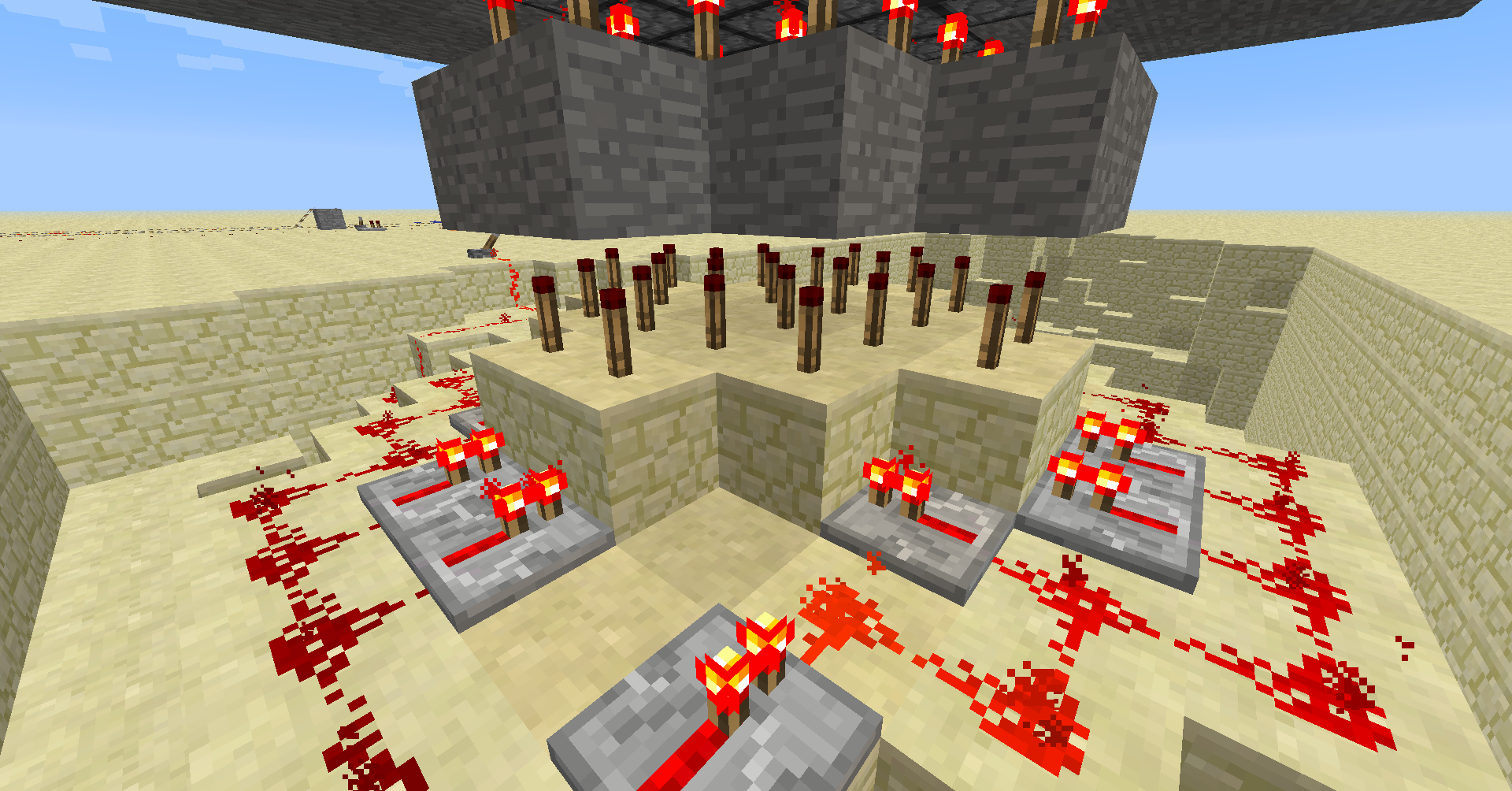 You can see the layer's torches better up close though: 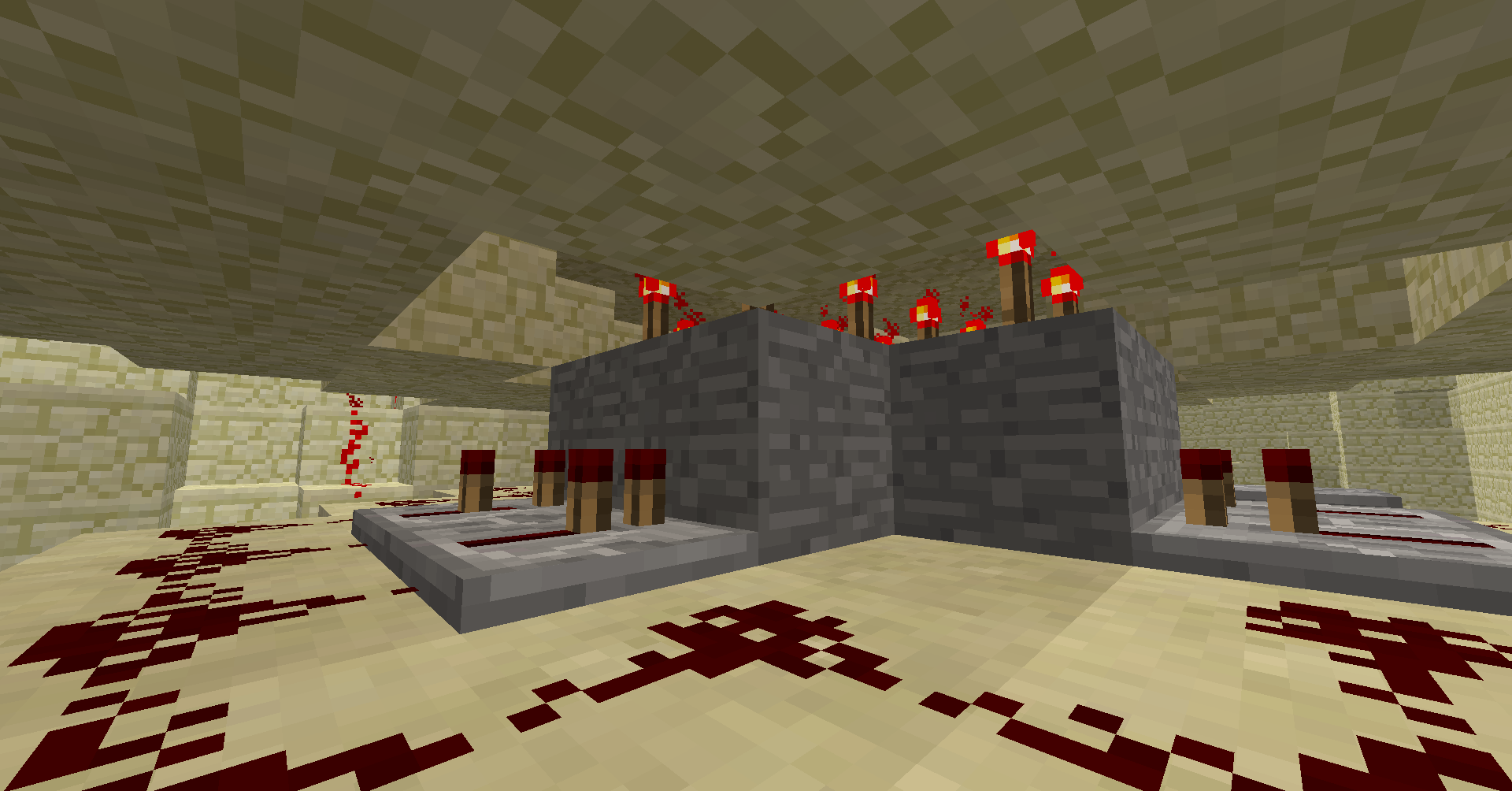 Again, you can see the torches if you get up close and look under the supporting blocks: 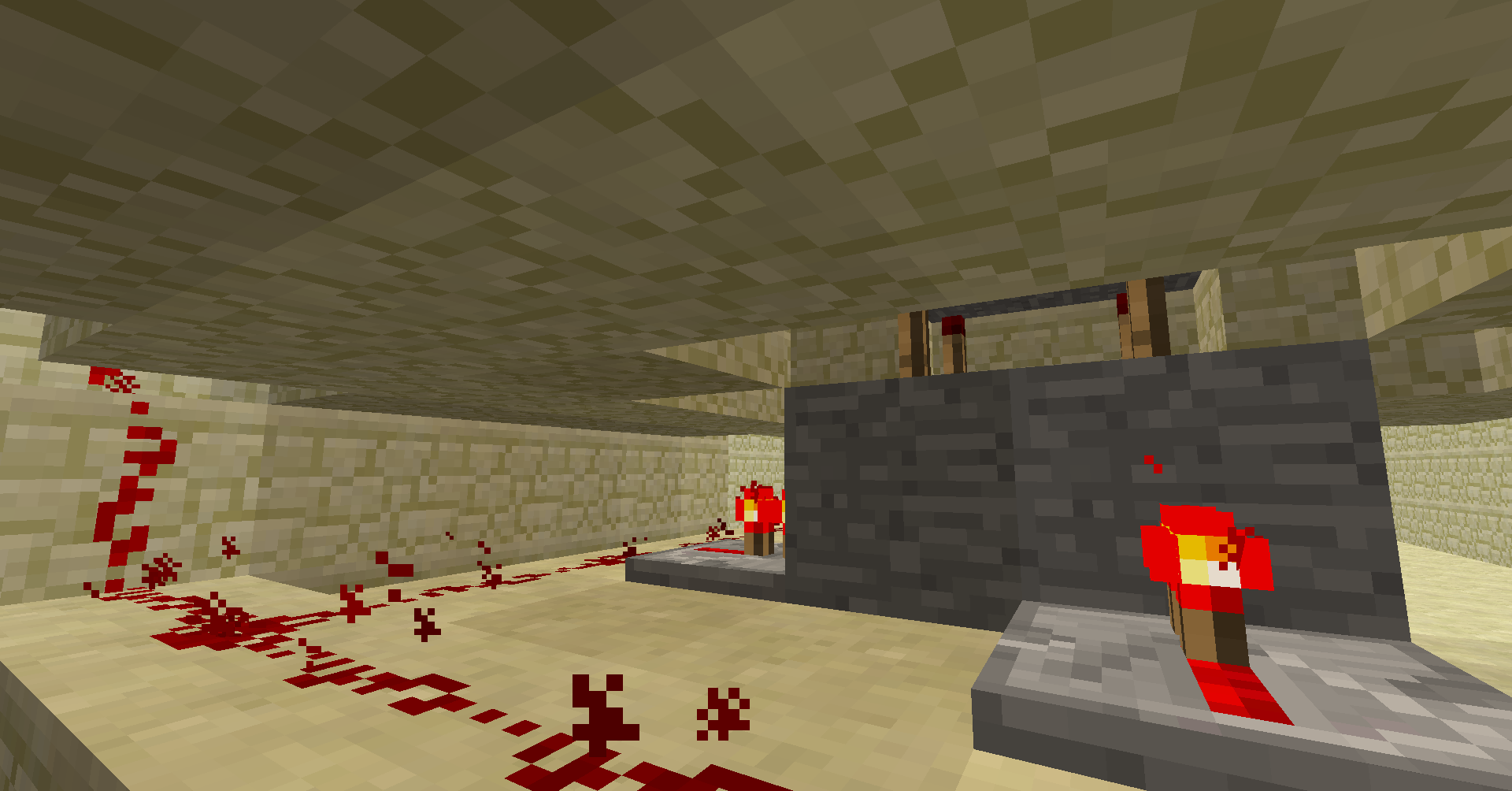 * You can make a slightly more compact version of this if you get rid of the top layer of torches and invert the signal from the switch (or just be OK with the switch flipping the "wrong" way to turn it on.) That top layer of torches are redundant, and just left over from my experimenting. Unfortunately, I can't think of any way to eliminate any more of the vertical wiring, because the wiring for each ring has to be on a separate layer, and you need the room to move the signal upward through multiple vertical redstone inverters.

This is what it looks like from the side when the redundant layer is removed: 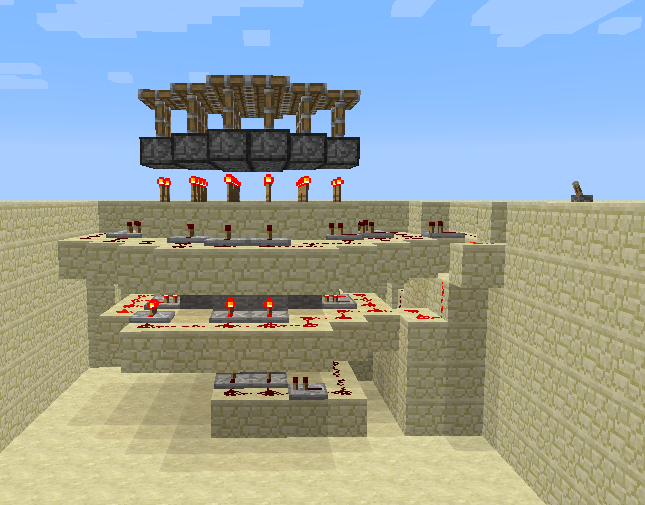 I've uploaded the save for the compact version of the piston table if you want to get a better look at it.

My method is a bit more compact vertically, but is considerably less elegant than SevenSidedDie's solution. 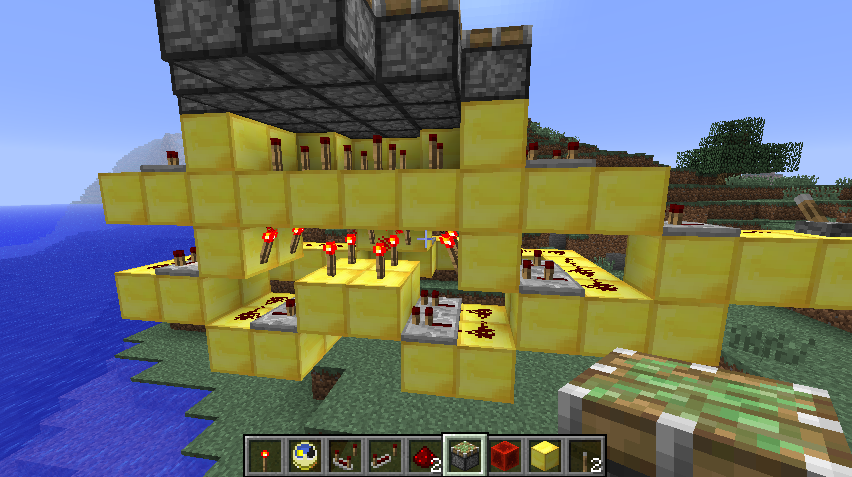 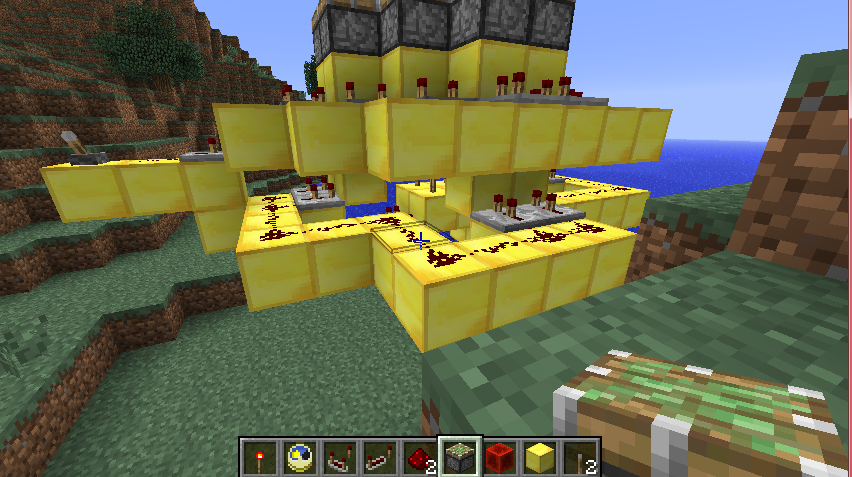 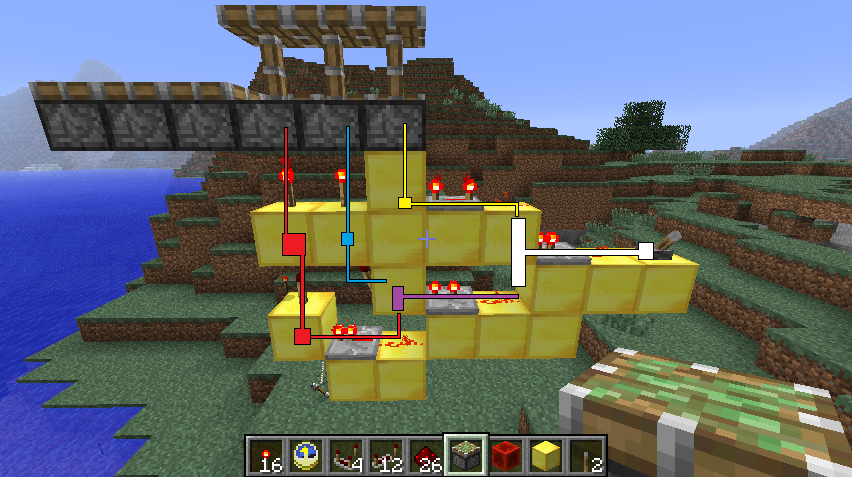 The timing of the various pistons may need some work, and might require some expansion of the wiring to account for additional repeaters if getting everything to fire at (near) the same time is more preferable than not.

Here's a different sort of redstone pattern for this problem. Most of the other answers here use rings, so that the center gets deeper, and redstone has to be laid out in three-dimensional structures. This design:

Here I've built it with two copies left and right and only one layer deep, except for the bottom signal feed so that you can see how to hook it up. 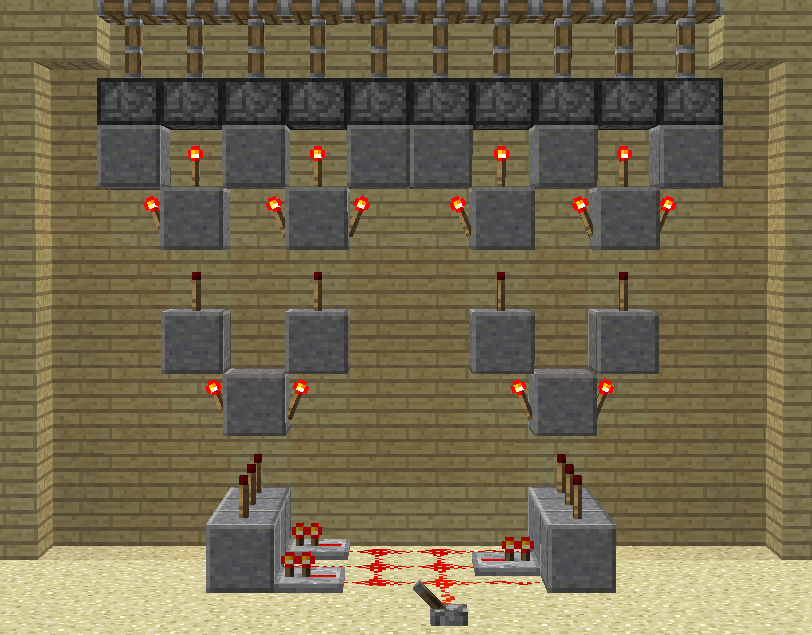 If you want to make it more than 14 or so deep, you'll have to feed the bottom from alternating sides to have room to repeat the input signal — but there's plenty of room to do that.

(This is a refinement of an old design I used on a piston pool a few years ago back when that was a thing; but it was less efficient than this because it only branched once and had to go ever deeper as it got wider.)

Here are the images, thanks again everyone!! 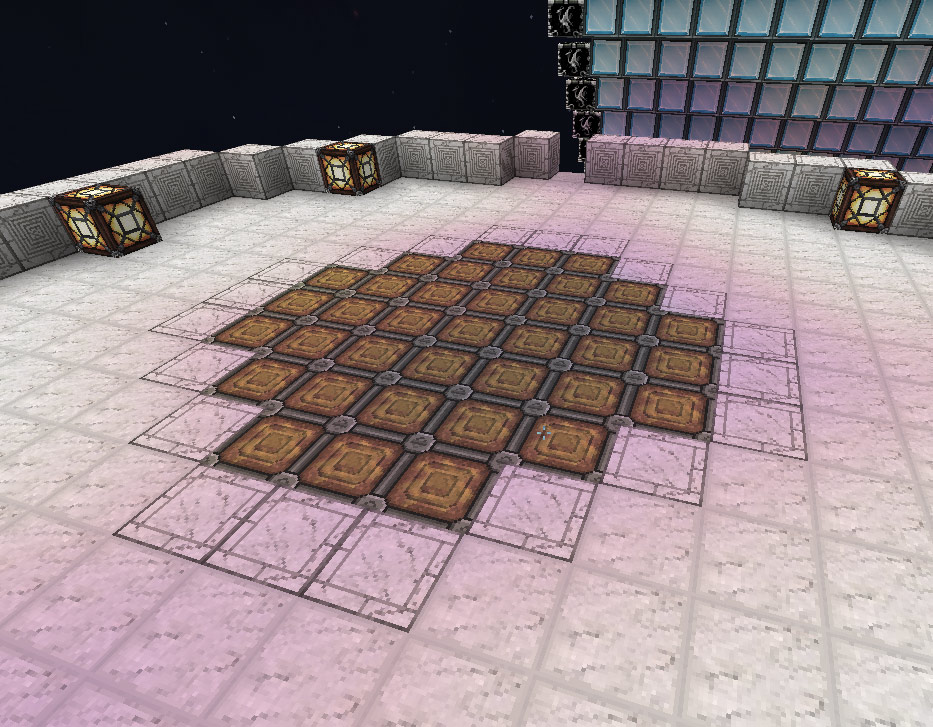 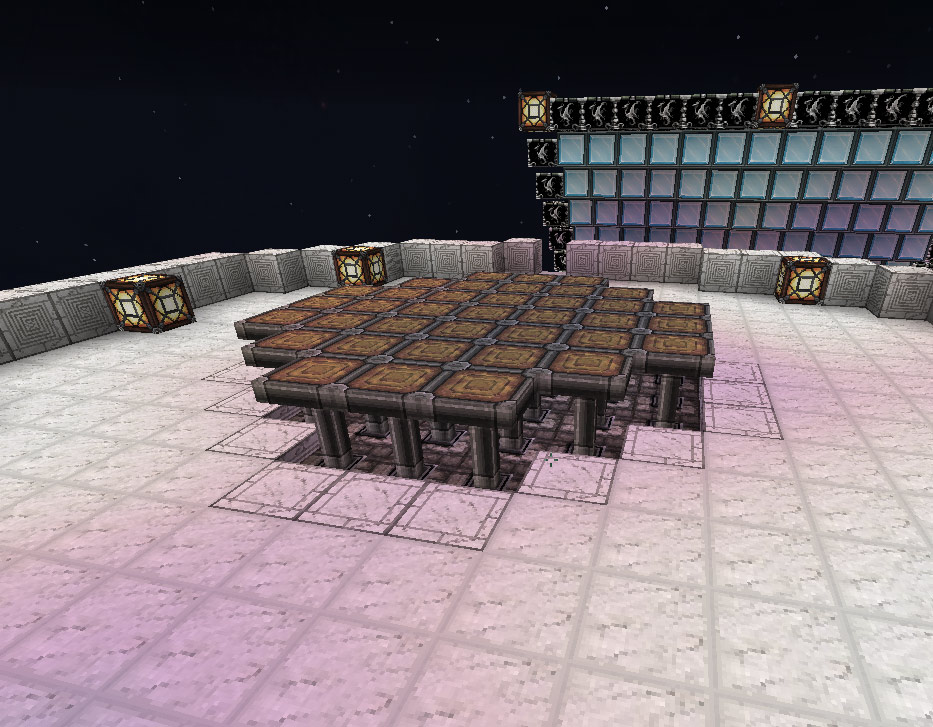 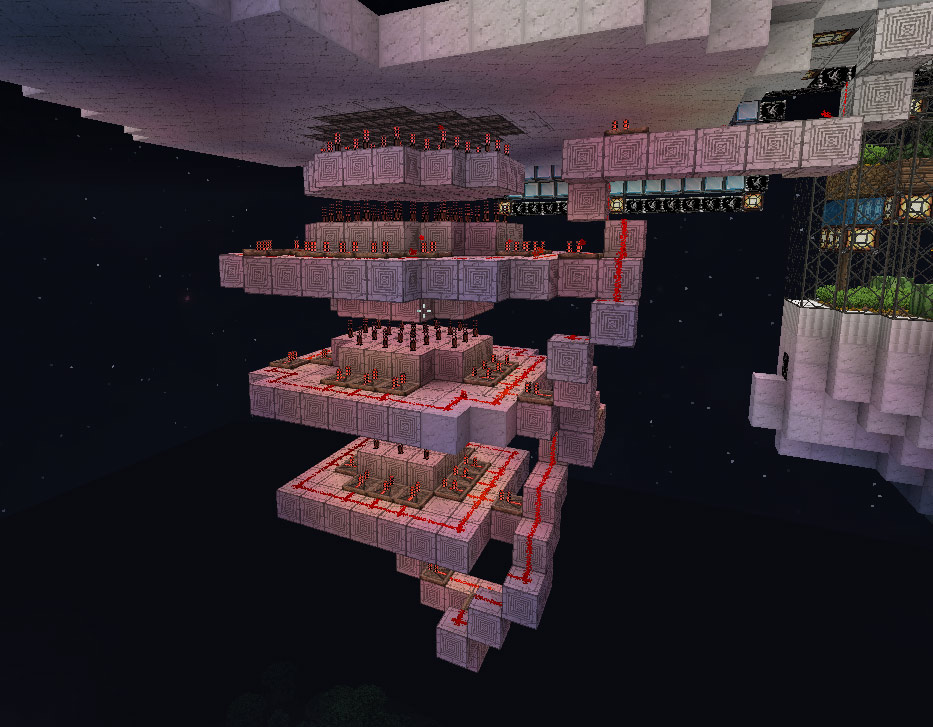 19
How do I create a hidden staircase?
6
How can I get this redstone blast door to do what I want?
7
Getting the signal from a floor pressure plate in the middle of a room
4
Signal directing on lanes
19
Why are these pistons pushing?
5
Why is my mob farm not allowing me to grab XP orbs in Minecraft? How can I fix it?
1
How to change the direction of a command block chain? 1.15.2+
0
How do I correctly rewire this 2x3 flush piston door in 1.12.2 Minecraft Java Edition?
0
What's the recipe for an insulation amplifier for Furnace Mk2?