How can I pull off a Bank Heist without the cops getting involved?

In the Bank Heist levels for Bain, you're tasked with robbing a bank. This level is also re-used during Hector's Firestarter mission, where you're tasked with burning all of the Mendoza's money which is currently being stored in the vault.

The Firestarter mission specifically states you should stealth it, but it's seems like common sense that if you're hitting a bank that you don't want the police involved.

How can I pull off a Bank Heist without the cops getting involved?

Here is a guide on how to complete the Bank Heist map without setting off any alarms. I have included a video demonstrating how the execute the plan but remember that each game has a variety of randomised elements which means you have to adapt the plan to your particular spawn.

This depends, the Bank Heist level is used for the following levels, each with a differing objective;

Essentially the objective is to get into the vault, and then remove stuff from the vault (Bank Heist), or... set fire to everything in the vault (Firestarter Day 3).

First of all, the layout of the bank, this is the insider info screen but I have made some minor modifications to highlight the important possible differences in random spawns: 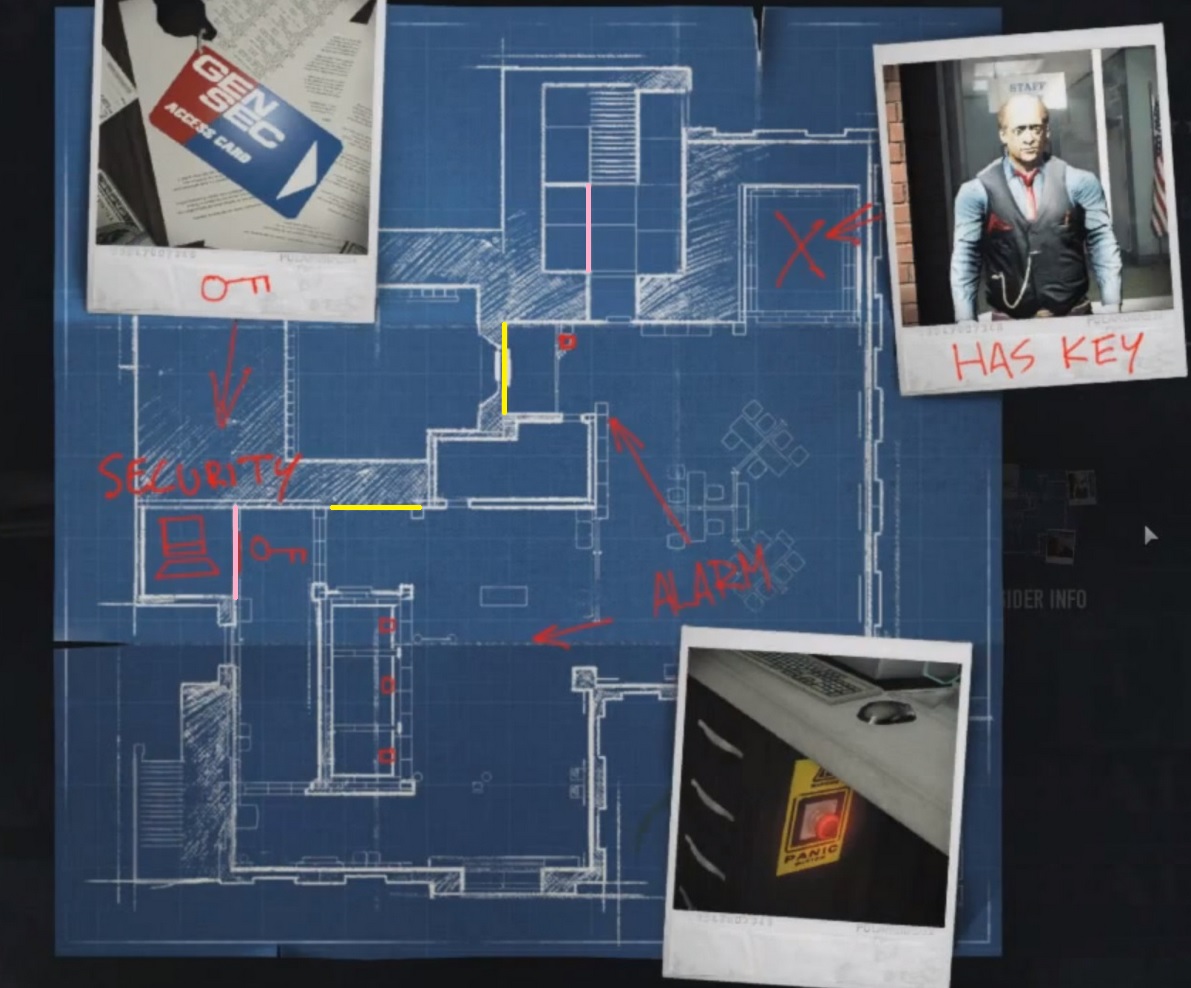 The YELLOW lines indicate where the entrance to the vault can be, while the pink lines indicate where the entrance to the security room can be. It is possible to get a "relatively" easy spawn by having the vault and security room both spawn at the back of the bank. It's also possible to have a "relatively" difficult spawn by having them both spawn in the lobby. Once you've mastered the tactic of how to deal with each of these spawns though, it all boils down to react immediately when you begin to lose control of the situation. Failing to react will result in an alarm, every single time.

This means that if moving into the back room causes disruption in the lobby, control the tellers before they can set off the panic alarms. Likewise, if moving into the lobby upsets the people in the back room, get in there before they can hit the panic alarms. Work as a team - if one crew member takes down a guard and another guard is closing in, work quickly to eliminate both threats.

The plan is simple:

So, nice and simple, right? Let's take a look at each step in more detail. You're going to want to be wearing suits and carrying minimal visibility weapons so that guards and cameras don't spot you the second you walk into visual range. You can have a crew member with the OVE9000 saw if you want, but this individual is going to be doing a lot of standing around while the appropriately geared crew members set up the heist due to the high visibility of the saw.

Walk into the bank, spot where the vault is, spot where the security room is, walk around and locate all of the guards, see what paths they're taking. You're looking for the little subtle differences caused by randomised spawns: Is the back door open? Are guards following a route that takes them out there? Are any of the guards on the roof? Is there a guard walking between the ATMs and the tellers and does he go anywhere else? Is there a civilian sat on the benches outside the bank?

Once you've got eyes on the guards, make your move on the security room, use an ECM or the managers' keycard to get in there and put a bullet in the guard, bag him and check the cameras to mark the guards. The rest of your crew probably hasn't masked up yet so they're not going to be able to mark the guards so this is going to help. If you've got guards wandering off alone outside, take them out, bag them and move their remains somewhere sensible. Quite often there is a dumpster open outside which is perfect for storing the bodies of everybody in entire bank if you want to. You don't want to rush this stage, a single mistake will result in an alarm, you want to be killing everybody cleanly without feet visible in doorways or civilians standing next to them.

Once you've got yourself into a position where the guards and cameras are no longer a threat, you have the most intense few moments of the plan. This stage requires coordination and if one crew member acts before the rest, you'll have an alarm on your hands, followed by a police assault. During this stage of the plan, you'll want one crew member to get all of the civilians in the back room on the ground - remember that there is a panic button in the back, if a civilians moves for it, put a bullet in them.

At the same time that this is going on in the back, one of your crew members needs to storm the teller's room, give them one chance to get on the ground but if they reach for the panic buttons, kill everybody in the room - don't take any chances.

You can of course use an ECM to stop any phone calls during this stage, it will buy you a little time and prevent an alarm in the event you miss one or two people and allow you to ensure that by the time the ECM expires the situation is under control.

Cable tie EVERYBODY. If it can get up and move, it's a threat. If you run out of cable ties, kill them or assign somebody to keep watch over them. Random civilians being able to move around during the later stages of this heist is a guaranteed alarm.

Once the situation is under control, start drilling. The noise doesn't matter, neither does the amount of time the drill takes to complete - by this point you should be completely in the clear. Keep your crew member on the street in case any other civilians decide to turn up but the ones inside of the building can now pretty much stand around waiting for the drill to complete.

By this point if you've not had an alarm you're probably not going to but whichever crew member is outside the bank should remain diligent as it will be a civilian outside the bank that results in the alarm being triggered at this point since you've cable tied or otherwise disposed of everybody inside the bank. This is further demonstrated later in my video below where I can walk around the bank breaking windows and shooting breakables throughout the level without triggering any alarms.

I shouldn't need to tell you how to loot stuff, I'm sure you have that under control, and with the absence of alarms the casual walk back to the van with the contents of the bank in bags should not be an issue either.

Here is a video of Bank Heist: Cash being completed on overkill difficulty without setting off any alarms:

When robbing a bank and attempting to avoid cops one needs to follow these easy steps. (Requirements) camera feed asset,2 people, one mastermind with the "Dominator" and "Smooth talker" skill, the other to watch the camera feed asset And proceeding into our steps

I just did the bank in 3:53 full stealth. I use Dominator, ECM, bagging bodies.

I start with the back room. Taking gaurds with dominator. Once all gaurds are subdued, I go to the camera room, subdue the security gaurd. And then proceed to drilling the vault once the manager or any loose civilian walking like the manager around or through the bank.

Once the back room is cleared and cameras(camera's as you go for the civilians, cameras first as you yell at the civilians you run by. Watching back quickly for alarm runners.)

Now that I'm more confident with it all, if someone joins, I have probably taken all the cameras out after the gaurds that I could. So I may go in the side door at the front( checking the camera feed for cameras missed) ECM, into the tellers, take out the civilians at the tellers. Camera abover teller door. Then from tellers, you can shoot (BY THE WAY, ENSURE YOU HAVE A SILECNED WEAPON) the center camera, then proceed out to the camera outside at the bench.

I just tested it on P.C. Rank 5. Difficulty Normal. Silenced pistol. I first took the bank manager while outside the bank(off camera). Got him to move out of view(behind a car). Aquired the keycard and proceeded to go and shoot(silenced) the gaurd in the camera room after opening it with the keycard. The next gaurd, I had waited till he walked out to the back area(back door/back camera room) shot him or hit him then bagged him and moved him into the camera room. Waited for the final gaurd to do the same(obviously answered all pagers(you can answer four on P.C). With no one in the back area except for two people towards the front I proceeded to drill the vault. Just in case I went and moved the bank manager closer(don't think they can move, but watch your civillians.) Stealthed the vault in 9.00. Opening all tge vaults is another 30 minutes by hand.

I enter the bank and follow the manager. When he's outside I melee and bag him, then wait for the security guards to come search for him. I usually melee them too. After that, I go for the cameras and then the tellers.

1
Can you stop the cops appearing in payday 2
3
What are the various map randomisations for the Charlie Santa heist?

12
How does the Smooth Talker skill work when other players are involved?
6
How do I stealth the 'Framing Frame' heist?
7
How can I complete the Diamond Store heist without setting off any alarms?
3
Why were all of the deposit boxes open in the Bank Heist?
9
How can a crew perform a stealth job on the Big Bank job?
4
Big Bank Heist: Does 'the Beast' benefit from technician skills?
5
Where can the security rooms spawn on The Diamond heist?
1
How can I fix the glitch, Hud_Hint_Clean_Block_Interract
1
Is there a way to determine which computer I need to hack in The Big Bank heist?