TV displays Gamecube games in black and white and without sound

I connected my Gamecube to my HDTV using a PS3 composite cable (shown below). However, the image displayed is blurry, in black and white, and without sound. The cable fits perfectly on the analog AV out port, so I'm not sure whether this is a problem of incompatibility. Before buying a new cable I was wondering: are there any known issues when connecting Gamecubes to newer TVs? Does the Gamecube composite output have some proprietary hardware that will only allow Nintendo AV cables to work with the console? 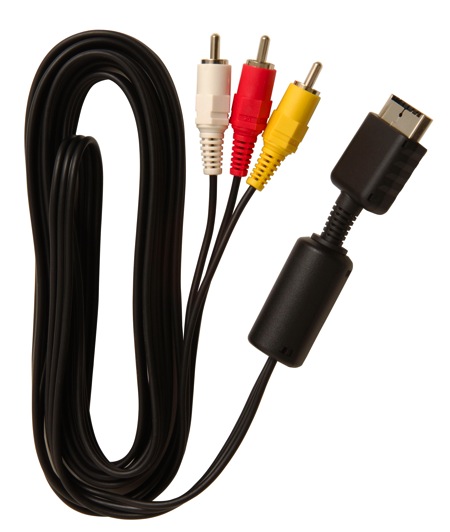 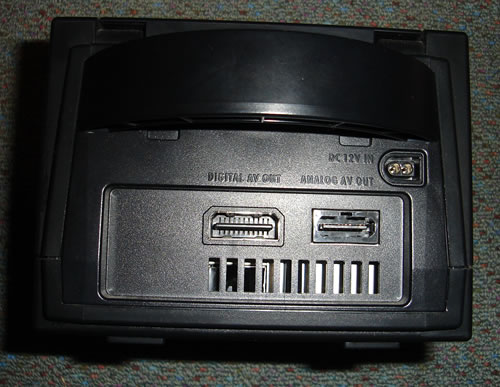 This is what you see when you plug a composite video output (yellow cable) into a component video luminance input (green port).

Put simply, a Yellow/Red/White cable does not connect to Green/Red/Blue ports because Yellow (Video) and Red/White (Audio) do not match the signals for Green/Red/Blue (all Video).

(For a full explanation, read on; or for the fix, just skip to the bottom.)

Composite and component, though confusingly having very similar names, are not compatible with each other.

Composite is a single-cable video signal. The main signal is luminance, which is the black/grey/white or "brightness" signal. There is a hidden sub-signal on the same cable that carries colour (chrominance) information, but it is weak and needs dedicated hardware to find and decode it so it can be combined with the brightness information. There's also some other buried signals about frame timing that aren't relevant here.

(The way I remember the difference is that "composite" combines all the information in one cable [that's what composite means, sorta], while "component" splits the components into separate cables. It's not a great mneumonic, but it works for me.)

So what's happening is that your HDTV is expecting to consume a luminance-only signal in the green input port, and you're plugging in a combined luminance-chrominance-timing signal which just accidentally happens to have a very strong luminance signal. The HDTV is happily consuming the brightness part of the signal and ignoring the rest because it doesn't know to look for the colour on the same carrier signal, instead of where it is expecting it (the blue and red ports), so it's showing you the black-and-white signal you're feeding it. (It's blurry because some of the edges are only visible when luminance is combined with the colour signals that the TV is not receiving.)

There are some HDTVs that have combined composite/component inputs, and these will either intelligently look for the extra composite signals and internally switch how they decode, or you have to use a menu/remote setting to tell it what kind of signal to decode. Your HDTV is obviously not one of the auto-switching ones, but if it's a menu-switchable one then you just need to figure out the settings and it'll work.

If your HDTV doesn't have a feature to switch the input though, you have to somehow contrive to get it a proper 3-cable component signal. Either you need a composite-to-component converter box, or you need to buy a component cable for your GameCube. The latter is probably challenging because the hardware is so old. The converter is going to be a matter of shopping around, since there are a lot of them, and a specific recommendation is something this site isn't really suited to.

Since your HDTV (a Sharp Aquos LC-46D65U) has an S-Video input, another possibility is using a composite to S-Video converter. (These are cheaper/simpler than composite to component converters, because the composite and S-Video signals are very similar and the conversion can be done with much simpler circuitry.)

If the HDTV doesn't have red/white RCA audio ports, then it either doesn't accept audio input at all, or it only accepts something like HDMI or optical audio inputs. In that case, you'll have to hook the audio cables up directly to your speaker system, get a converter of some kind, or some other way of getting the audio into speakers or headphones.

The problem is due to using a PLAYSTATION VIDEO CABLE for a NINTENDO GAMECUBE. I just now tried it on my normal tiny composite TV and it yields the same result. It's the cable not getting all of the channels because they don't line up just right probably, so it gets the basic stuff. It's an incompatibility issue. Not with your TV, but your console and the cable.

Not the answer you're looking for? Browse other questions tagged technical-issues monitor nintendo-gamecube or ask your own question.

4
Wii and S-Video results in black white window
2
Xbox 360s to TV with HDMI suddenly creating static
24
What Wii consoles can play GameCube games?
4
What's the difference between playing a GameCube game on a GameCube and a Wii?
0
Running import Gamecube games with GeckoOS
5
Playing UK-bought games on a Japanese GameCube
6
What are the exact differences between the Nintendo Gamecube and Panasonic Q?