Now that Terraria 1.2 has been released, I am definitely thinking about starting the game up again with a brand new map and a brand new character.

I recall from last time that creating a Hellevator was an essential task for delving efficiently into Hell.

Now that 1.2 has rolled around, what is the most efficient manner for building this Hellevator?

Qualities I am Looking For:

Take a pickaxe and start digging a shaft 2 tiles wide. If you find a cavern, wall it off on both sides if you want to avoid being damaged by enemies on your way down. If you don't have wings/rocket boots/a jetpack, build a wide wooden platform a dozen or so levels below hell's ceiling. If you don't have a lucky horseshoe, shoot your grappling hook towards the platform, and you will not take fall damage. You can also break your fall by grappling to the walls. Look at the minimap to be ready for the end of the trip. You can also use a 3 tile high pool of water or some rope to break your fall.

As for the way back up, 2 words: Magic Mirror.

You can also try making a rope hellevator by placing rope in a vertical line down from your house and into Hell, if you want a solution that takes advantage of 1.2 features, but the time it will take to build is quite long and it provides no benefits except for making sure you won't take fall damage on the way down (it's also helpful if you don't have a magic mirror, but by the time you start exploring Hell, you really should have one).

Pre-hardmode you should not come upon any types of rock that can't be broken with a good metal pick. However, you will likely have to deal with several pockets of magma. Water turns magma into obsidian, and you will likely have a lot of water in your hellevator as a result of breaching underground lakes. Let the water turn magma into obsidian and dig through it as long as you have the water to turn the magma underneath into more obsidian. If you don't have a lot of water, it can be helpful to use some of the materials you picked up to build a few walls on the sides of your hellevator so falling water doesn't escape the shaft. If you run out of water, move up, find an underground lake and mine a tunnel from it into your hellevator. Alternatively, you could just chug an Obsidian Skin Potion, a single bottle should give you enough time to bust through, though the Fireblossoms required to craft one may be hard to come by without reaching Hell first.

Speed - just dig straight. It's the only real option for speed.

Survivability - nothing beats the Lucky Horseshoe. New accessories would allow you to brake your fall late, but it would require some to moderate effort on your part and that's not as good. Sans Horseshoe or new tools, you have to resort to something like a pool at the bottom (make it deep, a couple of body lengths). I don't like that method myself. If you want to prevent monster damage, just build side walls whenever you hit natural caves. Make it a tube all the way down.

I wasn't sure if you wanted to avoid spoilers but climbing claws/shoe spikes allow you to slide down walls and you can wall jump a little. They can be combined into an item that allow you to cling to walls. Again, using this requires you to time the end of your drop which IMO is not ideal. The Umbrella, when actively used, slows your fall. Its available in wooden chests now, as are the claws/spikes.

Lastly, Rope can be used to fix the falling issue. 10 pieces of role can make a coil, which is useful in part because it can be placed and it takes up 10 sections, saving a little bit of effort. You can line one side of a hellevator with rope and create an easy solution to get down. IMO, it's not hard to get a horseshoe and that's still the preferable option.

Ease to Build & Tools & Immediacy - Unfortunately, the ease to build is something of a relative notion. It's going to take you time no matter what, and there is no way to mitigate that (but see below) You are digging straight down in a shaft two tiles wide. Pre 1.2, you would have been crazy to try digging with anything less than a Gold Pickaxe. It's the first one that reduces the # of hits to break stone to 2 (from 3), and dirt to 1 (from 2). Even in a small world, you will be digging through a lot of stone on the way down and anything worse will drive you crazy. Allegedly, some of the new pre-hard mode ores make better picks, but I can't comment to the particulars at time.

If I get lucky on early spelunking then I make a gold pickaxe (lucky = easily reachable gold deposits, gold bars found in gold chests). Otherwise, I usually farm the Eater of worlds a little and get the nightmare tools + good armor. The nightmare pickaxe is ultimately the same as the gold (same speed; slightly increased digging power but not enough to matter). This takes more resources up front (building an arena, money for bombs to mine down to and destroy shadow orbs unless you luck out and get enough mats for worm food) but there is no guarantee you'll come away with enough gold for the Gold Pickaxe after significant spelunking. It takes 12 gold bars (48 ore) to make it. The Platinum Pickaxe is slightly more powerful but not enough to make a difference in whacks needed to remove a block.

You don't need any other resources for digging the actual hellevator. you may need resources to build a hell bridge but you just picked up a crapload of mats on the way down so you are set there. Getting to a sky island does require some extra time spent chopping trees, but we're not talking about a lot of that.

There were also pre-release rumors of new types of tools that could help but I have not found any evidence of them yet. I will update this answer if I find anything.

I know you said you are going to create a brand new character... But if you are willing to carry over some equipment from another character, wear the Mining Armor. The helmet provides light, and wearing the entire set makes digging 30% faster. Since a hellevator involves a lot of digging, this bonus can speed things up.

The three pieces of the mining armor are (relatively rare) drops from the undead miner enemy, found at the cavern layer. The helmet can also be bought from the merchant.

If this is a new character with no equipment, however, it will be quicker to complete the hellevator to the underworld than to stop at the cavern layer to kill undead miners until they drop the three pieces.

(The existing answers are already very good. My answer is just an additional suggestion that some players will like.)

The easiest way now is to use the Drill Containment Mount from crafting many Hardmore ingots together.

While getting to hardmode may take some time, the fact that you can bring your mount to any world makes building a hellevator a very painless procedure.

The drilling speed is incredibly fast, and the fact that you can point your mouse in any direction coupled with its wide radius allows you to quickly mine through any material.

The following image is the radius of the mining mount if not moving: 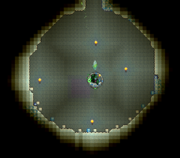 21
What's the most efficient mining pattern?
23
How can I create an efficient tree farm?
8
Efficient method to farm souls of light/night?
13
What is the easiest most efficient way to farm Shadow Scales?
6
How do you farm the solar eclipse? If you can, what is the design?
4
Arena design for events in Terraria