Which character is best for the healer role, other than Aeris?

I am going to need a utility/healer when

Who do you suggest I use? I've pretty much run a party of Cloud/Barret/Aeries most of the game because it works well for my play style and I faceroll everything that isn't a boss.

I don't even want to get to the point where she dies, I like her far too much as a character.

I know some characters are more geared for healing than others, but who is the best?

Have a look at this thread comparing stats of the characters: 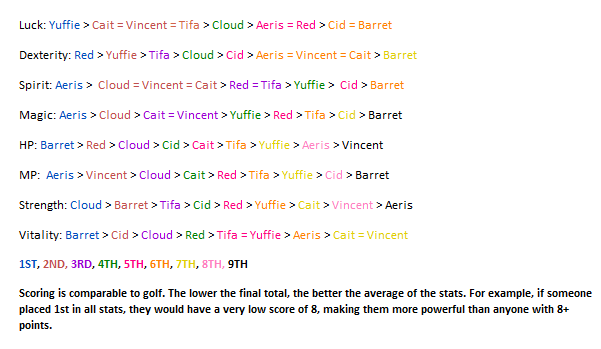 Note that the difference in stats is really pretty minor, and by equipping materia to any character you'll see more variation in stats than you will between characters, if I recall correctly. Additionally the Materia system allows much more versatility than just making someone a "healer", you don't have healers so much as "people with Cure and Revive", so it's easy to slip healing into any team.

Aside from their limit breaks, all characters are basically blank slates when it comes to their role in battle. Note that while cloud is the second best at magic...he's also definitely the best overall and is easily suited to any role. Basically pick a team of three favorite characters based on their personality/looks/limit breaks/weapons/whatever you please, then assign roles as you see fit. Since Cloud is basically a given and too overpowered to dedicate for healing, my healer was always just "Not Cloud" or occasionally "Not Cloud #2", though I usually gave multiple, or all, characters Cure.

If you exclude Aeris and Cloud, Vincent has the best (or tied for best) stats in Magic and MP, so he works well as a heavy magic user and healer.

The next highest in those two categories is Cait Sith.

Having said that, with the right materia like Magic Plus and MP Plus, you can make any character into a great healer.

Cloud. After you-know-when, Cloud had the highest magic stat. Plus, being a healer doesn't really waste the character's other capabilities, as they can still attack, be it physically or magically, when the team isn't in need of healing. Alternatively, you can just not have a healer and instead use items. Just place your potions and Phoenix Downs near the top of your inventory so you can get to them quickly in the middle of battle.

1
Northern crater, does the character path affect which item they pick up?
2
Can the same enemy in the same battle have more hp than other enemy of the same type?