How exactly does suppressing enemies work?

I chose to concentrate my skill points in the Enforcer skill tree, which has the Oppression skill. It can make weapons "more effective at suppressing enemies". To further understand how to take advantage of the 'Oppression' skill, I have these questions:

Enemies will duck and either hit the ground or try to move out of the way while being suppressed, during which time they won't do much firing back at you or your team. Certain enemies are more susceptible to being suppressed - pretty much anything "non special" below the FBI guys in full armour - these guys and specials will generally keep charging at you although I have seen tasers act momentarily suppressed. This is especially useful when you're trying to move bags in line of sight of enemies.

Just firing in the general direction of enemies will trigger the chance to suppress. How effectively you suppress is based upon:

Silenced weapons seem to act like a negative modifier to suppression, since the enemies don't "hear" the gunshots and therefore don't try and hide. Sticking one of the noise amplifier/threat increasing modifications (sharks teeth, fire breather, etc) to your weapon and increasing the noise it makes will improve your suppression.

This is further detailed on the inventory screen when looking at weapons: 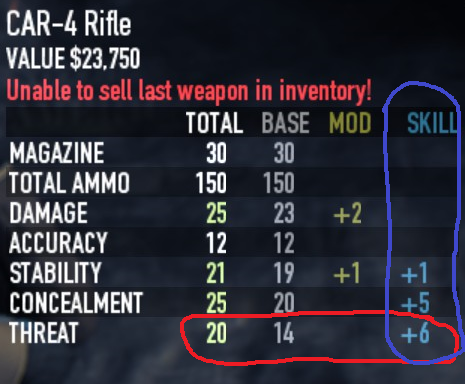 The amount that your skills increase the effectiveness of a particular statistic is indicated in the "Skill" column.