I've barely scratched the surface of competitive CS:GO, but from what I've heard, the phrase "rotating" is shouted out a lot.

What exactly do players mean when they say "rotating". Does this mean players on another team are swapping roles? Or does it mean that they're moving from one Bombsite/Hostage to another?

Rotating is effectively moving between points of interest on the map - this could be bomb sites, hostage locations, locations where a team mate just died, or other mission objective.

It's not specific to Counter Strike. Use the following map of de_dust2 as an example; 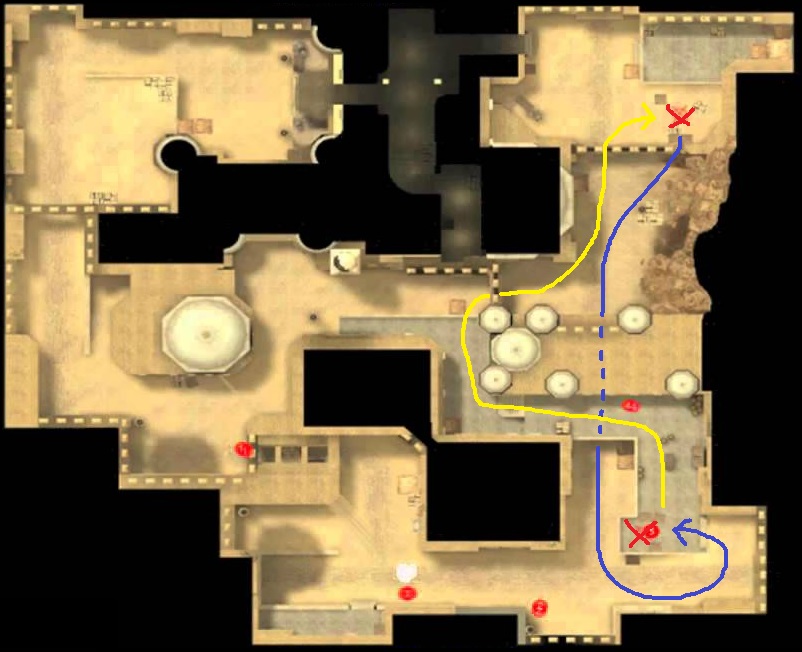 While the routes may not be exact, rotating on this map would generally indicate moving between the bomb sites marked with red X's.

I have no experience of Counter Strike competitive, but I have watched matches. So, for example you're a terrorist.

You're in Bomb Site A with the bomb, and someone from the enemy team spots you heading there. You will need to "rotate" to Bomb Site B since you'll get killed in A. Basically, it is going to another place in the map from where you are.

Not the answer you're looking for? Browse other questions tagged terminology counter-strike-global-offensive or ask your own question.

19
What is Griefing?
16
What does MOBA really mean and what characterizes games that belong to that genre?
9
What is ADR in Counter Strike?
47
What is Vanilla?
28
What is a tick?
12
What is "rubber banding"?
44
What exactly is a softlock?