What are the effects of Pokemon Amie in X and Y?

While playing Pokemon X and Y, my touch screen is usually in the Pokemon Amie page. So my Charizard was in the page and it is thinking of food. I opened up Amie and gave it some food. I am wondering if this has an effect on the way the Pokemon battles. For example, my Charizard is hungry, and I don't feed it, will it affect the stats of my Pokemon in battle, like its speed?

Well it can raise the affection of the Pokémon towards you. This is achieved by petting the Pokémon, feeding it and playing games with it. You can feed it Poké Puffs, which come in many shapes and colours, and usually the fancier ones will give more hearts towards leveling up affection which is measured in a five-heart scale. Said Poké Puffs are rewards from playing games, with harder difficulties giving better puffs. Your score is also a factor. Playing games burns food given to your Pokémon, so if it's full (turning its head when attempting to feed it), playing some games enable you to feed it more.

Petting it also raises affection, but after a while, instead of hearts, a speech bubble with a musical note will appear, which means further petting will have no effect at that time, it would rather play.

As for the effects: the Pokémon whose affection is higher might display a text when entering battle, like 'your familiar smell is comforting to it' and such. But better yet, these Pokémon might earn boosted experience points, shrug off status conditions (all of them I think), avoid attacks, deal critical strikes and survive an otherwise fatal blow occasionally. Some even evolve with high friendship. To reach the fifth heart after the fourth, you need to level it twice.

Don't worry, if you don't feed Charizard (or any other Pokemon) it won't affect their ability to perform at their peak in battle. However, gaining affection with your Pokemon has tangible benefits in Single Player battles (Not including Battle Maison), making it a worthwhile investment.

There are 5 levels of affection. You can check which level your Pokemon is up to by tapping on them on the Pokemon Amie home page and clicking 'Switch': 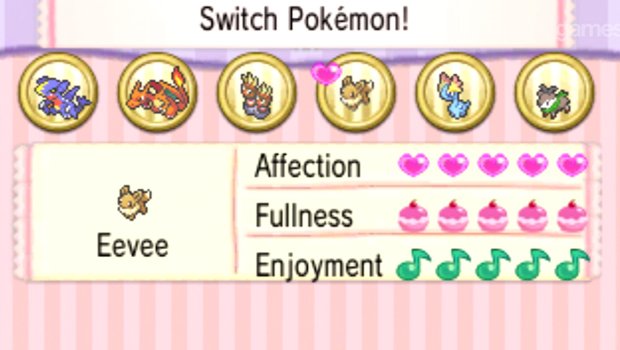 It is not possible to lose affection, so once you max out a Pokemon you don't need to continually 'top up' the affection stat.

You go up in affection by amounting hearts that your Pokemon gives off. You get hearts primarily for petting and feeding. The number of hearts needed for each level are:

The effects that you gain in battle are:

These effects are followed by some text, and are denoted by a small heart (like the ones you earn in Amie) floating up from your Pokemon. For example:

"<Your Pokemon> was so in sync with <Player Name>'s wishes that it landed a critical hit!"

There are also cool things that happen to your cursor if you touch certain parts of a pokemon.

Freezing: The cursor becomes blue with a freezing sound, and stays still for a moment. (Example: Touching the spike of a Bergmite.)

Paralyzing: The cursor turns yellow with an electric sound, and stays still. (Example: Touching the cheeks of a Pikachu.)

Cutting: The cursor becomes covered in bandages with a steel slicing sound effect, and stays still. (Example: Touching the blade on a Pawniard's head.)

Gooey: The cursor turns slightly blue, slows down, and has a higher pitch than normal rubbing. (Example: Rubbing a Ditto.)

Haunted: Purely aesthetic, it turns the cursor more transparent. (Example: Touching the hair of a Gourgeist.)

Slimy: The cursor becomes significantly slower and looks like it's covered in sludge, making a wet sort of noise. (Example: Touching a Garbodor.)

I just did some research on this while obtaining Sylveon. Once a Pokemon's affection is maxed it wont decline. When you exit Amie having maxed out affection, it will say for example: "Charizard will be your life long friend".

With being maxed in affection you will land more criticals, take less criticals and your accuracy and evasion increases.

16
What effects does Streetpass have with Pokemon X/Y?
20
What are the differences between Pokemon X and Pokemon Y?
9
Where are the NPC Pokemon traders that I can trade with, and what do they offer?
3
In pokemon X and Y, what are the starting pokemon's final evolutions?
6
Is there an effective way to increase affection without Pokemon-Amie?
3
Where are these presents in Pokémon-Amie coming from and what are they for?
2
What are the little ovals in Pokemon Amie?
3
Pokemon X and Y Hacked Pokemon
3
Why can't I max out Shedinja's affection in Pokémon Amie?