Do old Storylets ever disappear?

It appears to me that the white, or normal, Storylets that aren't part of an event or longer story are infinitely repeatable. As I level up my Qualities, I have been unlocking more, but have not been moving on to these higher-level tasks because I have been collecting the rewards from the lower-level ones.

I'm now tempted to switch to the new Storylets that I've been neglecting, for higher Quality gains and to break up the grind. However, I'm concerned that if I gain too many levels in the associated Quality, the old Storylets will start to become trivial and fall off.

Will I be able to keep my easy source of items if I continue to progress?

No, any white (regular) Storylets that you are eligible for shouldn't disappear, but you may eventually become ineligible for them.

Like you've said, while Storylets of other colours may disappear after they are completed, white Storylets normally don't.

Here is an official source on the matter (taken from the "What are Storylets?" section of the in-game help):

All Storylets that the player is eligible for in a given location are always available.

Here is an example of a Storylet that has both a minimum and maximum Quality requirement (which I have exceeded): 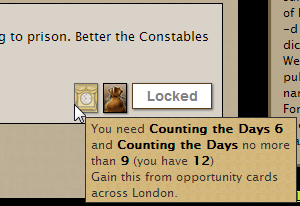 What can be even more confusing, however, is that while some Storylets may have maximum Quality requirements, they aren't explicitly told to you.

Here is an example of a Storylet that only says "Unlocked with Shadowy 32", but that has been found to be no longer available to players with Shadowy 47 and above (See "Rob a honey den" in the Echo Bazaar wiki): 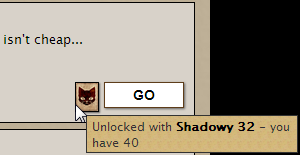 While some might find this annoying, it seems to be done as an effort to keep these locations from becoming cluttered with Storylets that are largely irrelevant to higher level players.

Yes, storylets will disappear as your four main Qualities increase. Most white storylets, most bronze storylets, and and a fair number of Opportunity Cards will only be available if one of your four main qualities is in a particular range. So you might see Search for a missing Rubbery Man if your Watchful is at least 35, but once your Watchful is high enough (50? 60? 70?), that storylet will disappear. (Some of the storylets are well-documented on the wiki for when they appear and when they disappear, but the information isn't complete.)

Storylets appear and disappear based on your current Qualities, as affected by your equipment. If you pick up a Talkative Rattus Faber (-25 to all stats) from the Bazaar tab, you'll suddenly see several old storylets appear again. Similarly, equipment that improves your Qualities will unlock higher storylets.

If you disqualify yourself for an Opportunity Card, the result is a little odd; nothing will happen if you click on the card (the page will refresh, but with nothing new on it). The card's the hover text will include something like "unlocked with Watchful 25 and Watchful no more than 50" if you have 51 Watchful at the moment. You can discard the card, or you can shuffle your equipment around until you qualify for the card again if you want to play it.

As RedRiderX says, some storylets will be visible-but-disabled if you have the wrong value for a required quality. (The cards that require Counting the Days are notorious for this; they're usually only valid for a narrow range of that quality. Fortunately, Counting the Days is a quality that gets reset to 0 from time to time, so there will be plenty of opportunities to play the storylets that require it.)

Not the answer you're looking for? Browse other questions tagged fallen-london or ask your own question.

7
What is the difference between yellow and white unlocked Storylets?