How are the regions connected?

There are 6 regions in Pokemon, each one introduced in a new generation of games. In the second generation, I remember being able to travel to the first region, but other than that, that is the only connection I know between the regions.

Now, I know each of theses regions have representations in the real world (mostly based on Japan, though Gen VI is based on France, I believe), but what about in game? Is there any connections between the regions other than the first two? And is there any explanations given about the other regions? Or does each successive generation introduce new Pokemon, and a new region, and completely ignore that the previous region existed?

Beyond Gold, Silver, Crystal, and the modern remakes, HeartGold and SoulSilver, none of the flagship pokemon games have ever spanned more than one region (though several have included isolated islands or otherwise remote areas). So "as far as we know", only the Johto and Kanto regions are confirmed to be nearby (and are, in fact, adjacent).

As mentioned in Bulbapedia, however, the first four generations are all analogous to real-life parts of Japan, while the fifth generation maps to the New York Metropolitan area, and Kalos (6th and current gen) maps to real-world France.

I wouldn't go so far as to say that the previous regions are completely ignored (Oak, at least, has made it to Hoenn on more than one occasion), but beyond the previously mentioned exceptions (and monsterous residents, which feature previous generation pokemon in their "National Dex"), each region is pretty much distinct. 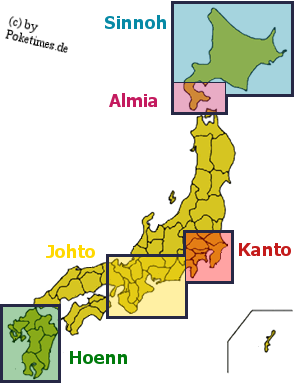 There is an in-game myth that Unova is directly connected to Sinnoh through the deepest part of the Cave of Being in Unova. (I've tried. It doesn't work.)

Kalos and hoenn should be near because, the looker from X and Y's looker quest went to hoenn and if you go to the battle resort, on a certain spot of the island you can find an amnesiac looker washed up on the shore.

Not the answer you're looking for? Browse other questions tagged pokemon-series .

5
Which type of Pokemon are affected by the move "Whirlwind"?
3
Additional Boxes - Criteria, Longevity, Manipulability
1
How many unique Pokémon formes are there?
5
Official insignia for regions?
8
Are there different forms of Missingno?
25
Is there an in-game explanation for the increase in the number of Pokemon between generations?