I need help with my pump stack

I have five Screwpumps built vertically following the wiki guide. I do not have any other machinery attached, but it was my understanding that one dwarf would be able to power the whole stack. I ended up having to put five dwarves to work to get the water to the top. Do I have to link the stacks somehow (mechanisms? Axles?) The guide seemed to suggest that the pumps just being vertically aligned w/ alternating pump directions would be sufficient. The stack does "work", but how can I make it work w/ just 1 dwarf powering the thing instead of a dwarf at every pump? 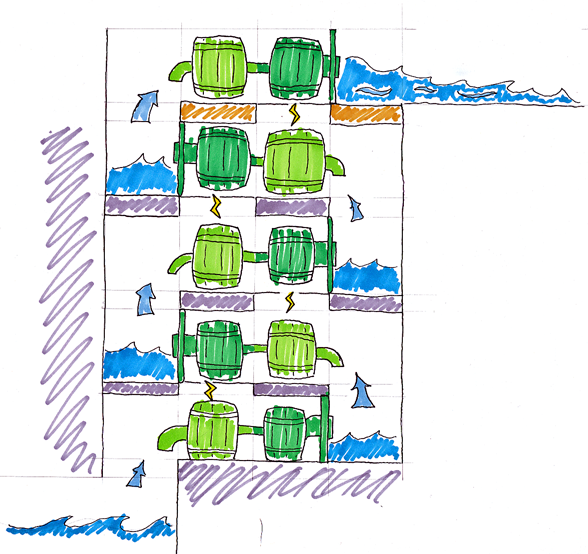 On the second floor I have a gear powering the stack, but it is not powering any of the other ones. I do have a Dwarven Water Reactor Like Raven mentioned, but it only powers the pump on the second floor. Do I need to build vertical stack of gears next pumps?

The thing about screwpumps in Dwarf Fortress, is that they can either be automatic (receiving power from a wind/watermill) or dwarf powered. Of these, only the former transfers power, as a dwarf manning a screwpump does not provide power, but rather sidesteps the power requirement entirely.

If however, you were to hook any pump in your pumpstack up to a power source with enough power for the entire stack (100 power in your case), assuming you built the pumpstack correctly, the power in the hooked-up screw pump will transfer to the adjacent screwpumps (and so forth).

Because of this behavior (it's the basis for the Dwarven Water Reactor), any pump with manual power will eject its operator if it gets enough power to operate automatically instead.

Have you seen this .GIF? It shows how to ensure the power transfers properly between levels.

Here's what you have: 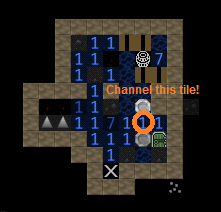 If you channel that space and then rebuild the screwpump, power will flow between the connected machines and the screwpump below will no longer need to be manned (dwarfed?)

All screw pumps have two tiles -- one which the dwarves stand on to operate, and one which acts as a wall. This latter part needs to be constructed hanging over an open space to facilitate the transfer of power (as the former part must be constructed on solid ground).

The wiki page you linked says:

Adjacent pumps automatically transfer mechanical power to any other adjacent pump(s), no axle or mechanism is required. If too many pumps are adjacent, there may be insufficient power to power them.

Do you have open tiles between the pumps? The power can't move through the ground. You need to channel tiles between all the pumps to let the power go through.

Have you tried it with just a few pumps less? I am not sure what the limit is exactly.

5
Why do I need a "screw trap component" for building a screw pump?
8
How much speed does a down ramp impart to minecarts?
3
How to mine out a pump stack shaft?
18
Dwarf Fortress: Area not getting designating for mining?
4
Will trees (trunks) ever consume in magma and how much do they need to be submerged in for that to happen?
7
How to power a 200 z level pump stack
0
Inability to diagnose dwarves, or get them water/food
5
Is there a way for player to activate mechanisms *directly*?
3
When designing a world with advanced parameters, how to increase the number of animal people?
7
Do barrels and other containers degrade with use in Dwarf Fortress?