I got lucky and got myself the Baron Geddon gold card today. But I cant see in which deck the card would really benefit, or in what combos.

What is the optimal way to use Baron Geddon? 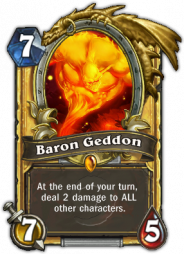 There are 2 great ways you can use Baron Geddon.

OPTION 1 (available to any golden legendary)
Since you got a Golden B.G. you could disenchant him for 1,600 dust which would allow you to craft any other non-golden Legendary of your choice (if you are not a huge fan of him).

I believe most people consider him to be one of the better legendaries, but above him yet is still (definately) Ysera and Ragnaros the Firelord. Leeroy Jenkins can be a great surprise game-closer as well.

OPTION 2
Second, you build him into your decks (some of them).

I do not have one yet, but I have had him work well in 2 arena decks where I had the good fortune to draft him. He is best used in a late-game style control deck.

I believe the best way to use him is in a Mage deck with +Spellpower (2 kobold geomancers, 2 ogre mages, & 2 azure drakes, +Malygos?) and a lot of spells. Arcane Blast, Blizzard, Flamestrike serve to wipe the board, especially with the benefit of spellpower.

In that kind of deck, Baron Geddon functions as an additional board wipe that also puts out a ton of pressure on your opponent's health.

He could be good in a druid deck because you could get him out earlier, also druids can be built with a lot of spells, similar to the mage and he could add additional control. He probably is a little worse in a Warlock deck than in most others because he competes with your ability for your limitted resource of health. He is probably not great for a shaman or paladin deck because he limits the functionality of your ability.

He will not work as well in an aggressive deck that uses a lot of small 2 & 3 cost minions. Try him out in a few different situations and do some unrated games in "Play" mode and report back here and let everyone know what you found out.

I play him in a Priest's Deck, with some cards for combo with HP and heal in area, it's pretty good. I put more HP on him or on my others creatures (if they survive just one or two turns, it's enough for the finish).

15
How high are the chances of getting a legendary card?

5
Are legendary cards always gold?
9
Harrison Jones and its usage
8
Rush Deck and Aggro Deck
4
What are the best decks for beginners?
7
What is the strategic importance of cards that can draw a card?
14
What happens if Baron Rivendare and Dreadsteed die at the same time?
18
Is my opponents card order the same for me as for him?
14
Why should anybody use Nat, the Darkfisher?
4
Do Plaguelords have infinite cards in their deck?