How can I get rid of my prisoner's corpses?

A bunch of my prisoners have died - from lack of food rather than brutality, although I don't think it will have an effect on my problem. 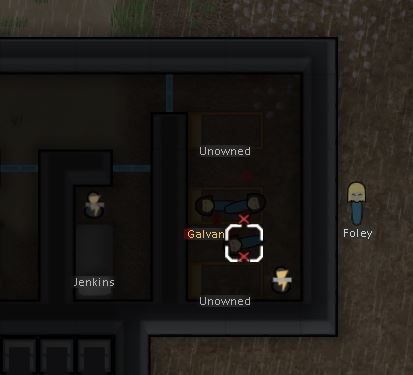 There is a growing pile of corpses in the room I keep my prisoners in. How can I get rid of my prisoner's corpses? I have enabled interaction by selecting the bodies and pressing F but there appears to be no options to interact with them.

Graves are not the only way to get rid of them.
They might be handy in early game, but as attacks become more frequent and larger, you absolutely want an option which takes less labor and space.

The primary motivation to get rid of them, is the malus your people receive after seeing a corpse. This malus increases, as corpses decay. This malus stacks, so a field of decayed corpses can easily provoke a psychic outbreak.

The ways to get rid of dead bodys are as followed (Updated at Beta 0.19):

Important sidenote: Dead colonists should always be interred, as other ways of getting rid of them will produce mood malus in your colonists (Except psychopath)

You must build graves in which to place the bodies.

Not the answer you're looking for? Browse other questions tagged rimworld .

3
How do I get people to eat from a nutrient paste dispenser?
2
How Can I Drop Gun?
2
How can I keep Tailoring?
9
How do I get rid of low quality items?
3
Do buried corpses rot normally?
4
What happens if I install an AI in a prisoner's brain?
5
How to completely get rid of bug infestations in RimWorld?
3
Cannot cremate corpses: "Cannot haul *. No empty, accessible spot"
0
Getting rid of site created via the developer tools
1
Which files should I modify to get rid of the unpleasant buzzing alerts?