Why are my people refusing to eat?

I have an issue in that after a period of time, my people start approaching a mental breakdown caused by not eating. As you can see from the below, I have plenty of food resources but one of my colonists, Holt, hasn't eaten in quite a while, to the point where she's starting and about to have a mental breakdown (as indicated by the flashing !) 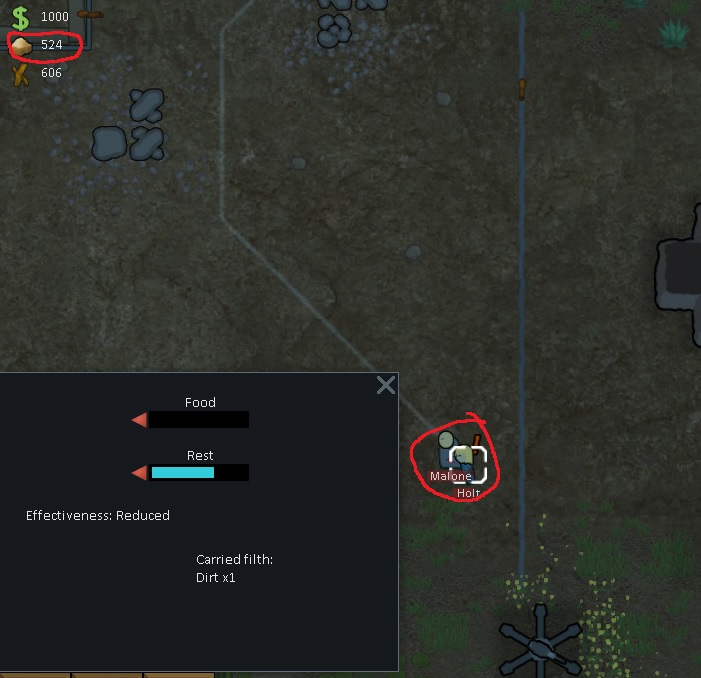 Why are my people refusing to eat? What can I do about it? Are there any particular actions I must do to ensure that they all eat?

The food icon in the top left is, essentially, banked food. Your colonists cannot directly eat that. The only way to access banked food is to use a Nutrient Paste Dispenser. If you don't have access to one of those (Solar flare, power issues), you will need to harvest plants such that there is food lying on the ground for the colonists to eat.

Actually, there is another way but this makes them temporarily useless, You wait until they break down then you will get a warning "Colonists Need Rescue" or something similar, you order another colonist to take nutrient paste to them then you prioritize them to "Rescue ......". This feeds them and puts them in a bed, after a few in game days they will be fed and rested and normal.

Ps. Well, this happened to mine so not sure if it will work for you :)

I had this problem, in the 3rd Alpha version. There was food available but the chap wouldn't eat. He was having a breakdown due to over-work. I think the real problem was that the food he was scripted to eat was raw and had a -8 negative modifier. Eventually, he had a mental breakdown and got rescued (same as the last poster said), and is now sat in a cell with a bed, having food given to him daily.

If your guys are breaking down but won't eat, try increasing their positive environmental modifiers in other ways. My first base was a disaster because i utterly neglected to clean the place. I'd say, just keep everything simple to begin with so it doesn't get out of hand. Hope this helps, fellow colonist.