Is the max skill of retail dream job bitizen only 8?

I have cycled through 500 bitizens (using a tower bux to move them in, and then evicting after) in order to try and get bitizens with a dream job and skill level 9 into each job slot, but I have not seen a bitizen with a skill of 9 in retail (purple) yet. Not even in bitizens that have other dream jobs. Is retail capped at a skill of 8, or am I just extremely unlucky so far?

You are just really unlucky so far. Here is a photo of Watto's Wares with three skill 9 bitizen with a dream job star. In addition I have two other bitizens that want Watto's Wares as their dream job, but it is already full.I was playing this on an iPad Mini, so your problem may be a device related bug. 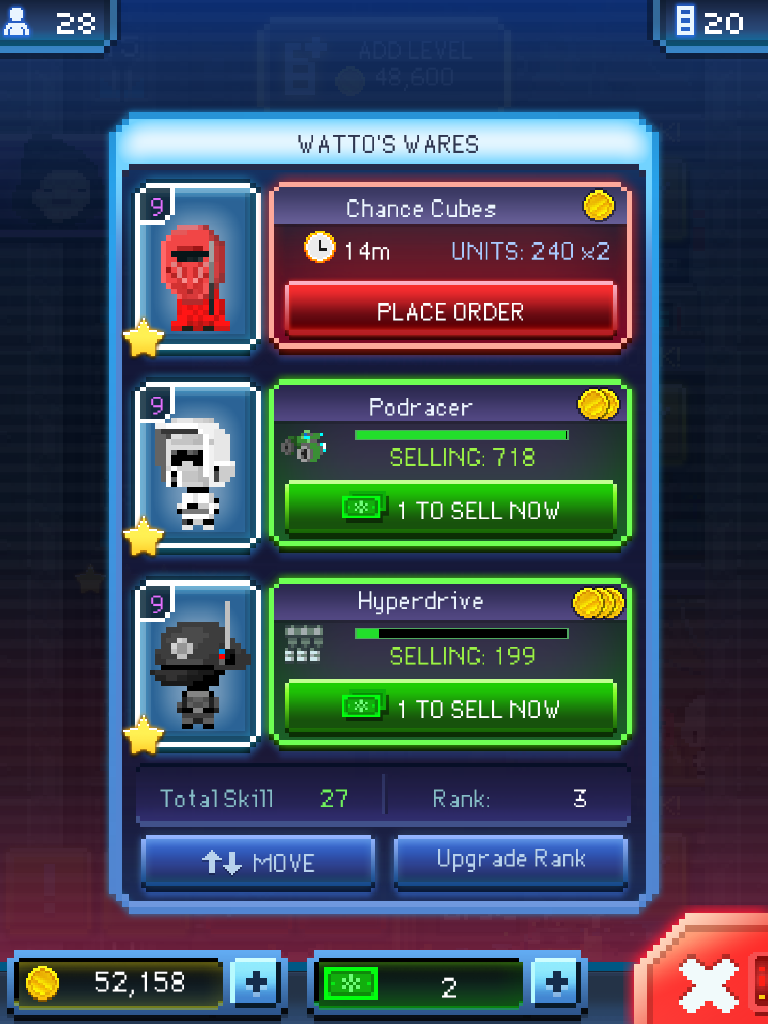 You're not alone. I'm 60 levels in, I've gone through hundreds of bitizens and haven't seen a single retail level 9 yet. This is on the Android version, fwiw, so I'm assuming it's a bug. This game has tons of them.

Retail is definitely capped at 8 in my tower as well. Every single bitizen that has ever visited has had an 8 or less in retail only.

Randomness can not explain it considering the amount of people I've moved in and out. It's possibly a bug related to a particular device if they are showing up for some people. I'm using a Nexus 4.

Yes, it's definitely capped at 8 for some devices! I think for mine retail can only be even numbers because of about 200 I've checked, they've all only been 8, 6, 4, 2, or 0. I'm using Android on a Galaxy S3. I hope they fix this bug soon so I can have a perfect tiny death star...

I too have had several level 9 Retail Bitizens, though it does feel as though there are significantly fewer. I'm playing the Android version of the game on a Samsung Galaxy III.

EDIT: I have to backtrack on this. I misremembered having anyone over 8, and i haven't acquired any since then, even after the holiday update. It looks like, on Androids at least, there are no level 9 retail skills.

Not the answer you're looking for? Browse other questions tagged star-wars-tiny-death-star .

7
How do I complete the "Fill a business with all Skill 9 workers"?
7
Vader - Lack of Jobs Disturbing. Add Business Level to Create More
9
Strategy that yields the most amount of credits for a floor
2
What are the stocking time differences relating to the rating of bitizens?
7
Is there a bug causing Emperor Palpatine mission to not register?
2
Does the 1.3.0 update fix the Android retail dream job bitizen max level bug?
1
Unlocking Imperial Marches Retail level after the event ends?
1
Dream Job no longer giving Bux
2
The Job menu is extremely slow
6
BUX changes and Issue with Dream job