What is the difference between Spelunky and Spelunky HD?

What is the difference between two versions of the game? Are there any gameplay changed, or the graphics update is the only thing?

Spelunky HD includes quite a few new features and additional, reworked content, including;

Here is an image demonstrating the differences in updated graphics; 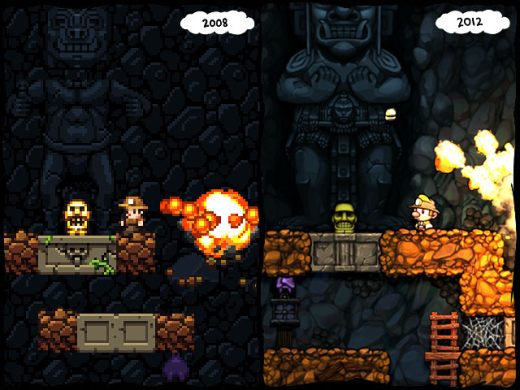 Additionally, since Spelunky HD has been released for multiple platforms, you get some platform specific content. For example, for Steam on PC you get trading cards and achievements via Steamworks. The GOG release is DRM free. The PSN release includes cross play and purchasing it via PSN allows you to play the game on both Vita and PS3.

There are new items, monsters, a new "secret" endgame world and boss, there are lots of new template pieces, ie the parts which levels are constructed out of, most notably a few new special set pieces (like the snake pit in the mines)

The gameplay itself also features lots of changes, instead of opening chests and crates with a unique action, you simply smash everything open with your whip. you can knock rocks and items with your whip and push them.

Bombs and ropes are only used from their dedicated keys now, which is a minor detail EXCEPT that in OG Spelunky you could equip a bomb/rope, stand on an edge until you wobble and drop it to set off an arrow trap, and then pick it backup when you get down. now you just have to make sure you carry a rock or smth with you.

Hitting a pot with a spider in it with your whip doesn't kill the spider anymore. spiders are way less nuts in Spelunky HD though.

The giant boulder that drops when you grab the golden idol in the mines is way more nuts.

This is something I've been thinking a lot about lately.

a few more minor changes i just remembered: you can break pots by throwing rocks through them and you pick things up just by walking over them without any additional commands.