What are the exact requirements for the 'Perform a near crash' objective in the 'That's Not in the Script!' Gangstas in Space DLC mission?

One of the objectives in the 'That's Not in the Script!' Gangstas in Space DLC mission is to 'Perform a near crash' with the 'Aegean' ship.

In my first playthrough of this mission part, I failed it several times as I always destroy my ship before meeting the 'near crash' requirements, even though I have performed multiple near crashes (like shown in the screenshot below). I have finished the mission eventually, but I still do not know what are the exact requirements to finish this mission part.

How many or how long do my 'near crashes' have to be for this mission? 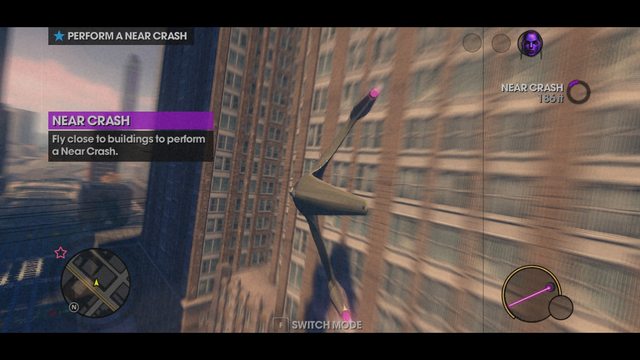 I find that this objective gets met very quickly with around 40m (say 130ft; SRTT sets measures to metric if your region settings in Windows says it should) of near crash but from your screenshot, it looks like you've changed the flight mode to plane instead of hover. I keep it on hover.

In one pass through this mission, I got 2 different near crash indicators and the second one was shorter, but seemed to trigger the completion of the objective. If that is any indication, there is probably a separate counter that is measuring cumulative near crash time, rather than a given distance. Certainly my 'parking' near a building would also lend some support to that hypothesis.

Not the answer you're looking for? Browse other questions tagged saints-row-the-third or ask your own question.

9
What are the respective awards for Ho Boat?