How can I deal with the "floppiness" of tall rockets?

I just tried to build a rather tall rocket which also uses several Quad-Couplers to add more engines, and as you can see in the screenshot below this thing is rather floppy and unstable: 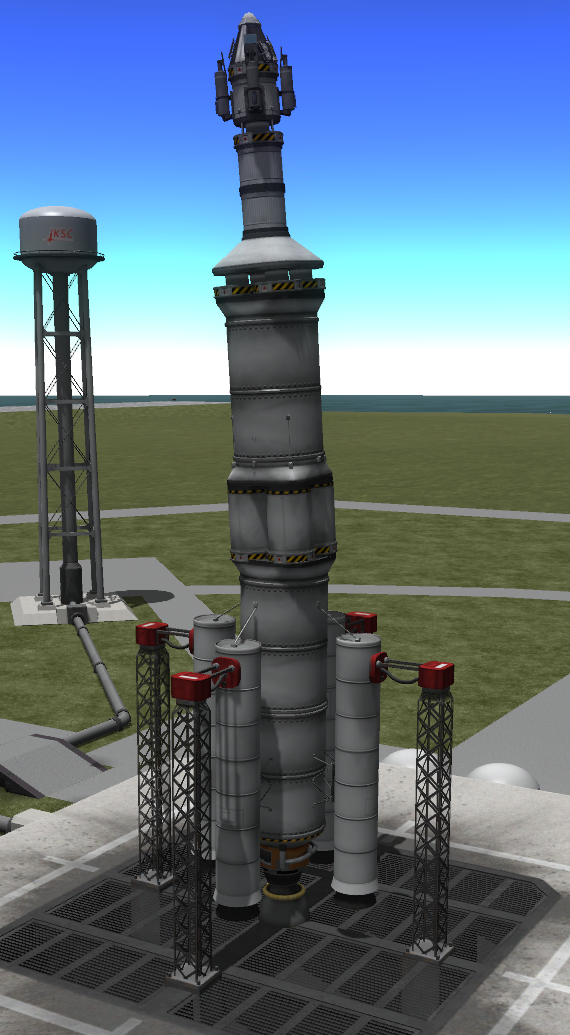 It also doesn't fly far due to these problems. I tried adding struts, but at the critical points between stages I can't seem to add any as the Quad-Couplers are wider than the fuel tanks.

How can I build tall rockets that don't flop around so much and that are actually spaceworthy? I'm both interested in this specific case, but also on general guidelines for this.

Even by adding struts as per @char1es' answer, your rocket still isn't structurally sound. The reason for this, as I've said before in other answers, is that the topology of a KSP rocket is in the form of a tree. This means that only one of the stack decouplers is attached to the bottom quad coupler. The result is that the other three are left "floating", and have no problem clipping through the other parts of the rocket.

No, what you want to be doing is using a single rocket with similar thrust and specific impulse to the combined 4 rockets. For the second stage, I'd hazard a guess that the skipper is probably what you want, while for the upper stage you probably want an LV-909.

As an aside, if your rocket can't support its own weight on the launch pad, it's not going to survive launch. If there's significant flex without it even moving, you may have done something evil, and at the very least something immoral. There are usually better approaches than doing stuff that's evil and/or immoral.

This may not be the most aesthetically pleasing solution but this is what i find works best for tall "wobbly" rockets.

You need to build an external frame around the rocket using struts and i-beams.

You can add as many levels of i-beams as you want, but keep in mind that it takes a certain amount of force to break the struts supporting your craft.

edit: this will not work for the quad-decoupler in the middle of the rocket, as mentioned by @MBraedley. However it works quite well for most excessively tall rockets.

This answer is for the more general case, however in your case, you cannot improve structural integrity because of the tree topology, as mentioned by @MBraedley.

little trick I figured out is to instead of using decouplers use docking ports. If you set them up right they attach immediately at launch. That way all four connections are made

Where the quad couplers are, I don't think you need those, if you want them you should at struts between the two couplers and some to the rockets.... Suggestion though!

3
How do I avoid collision with the launchpad tower?
4
How can I see the FPS in KSP?
4
How do I orientate the navball properly with a probe?
9
What can be grabbed with the Advanced Grabbing Unit?
6
How do I keep my rockets from blowing up the pad without launch stabilizers?
4
What's the air intake parts air drag in KSP past 1.0?
4
Why are parachutes so useless?
6
How to control a rocket?
2
Can I get a crew transfer milestone with the EVA jetpack?