What to do when witches appear early in the game?

A long time ago I played an older version of Minecraft. Back then witches didn't spawn naturally, so you couldn't find them unless you found a hut. Now I'm playing again, but sometimes when I go down a cave I find one or two witches, and it's really hard to find them back.

So, what is the best you can do to kill witches, specially when two spawn at the same time and you don't have milk?

According to the Wiki Itself

A bow will likely be the best weapon for dealing with a witch, as the splash potions have only a short range (at most nine blocks) compared to arrows (which, when fired straight at full charge, travel 24 blocks). If a bow is not an option, a direct melee charge is the best option. Due to the witch's slow attack speed, if the player runs in a straight line and manages to get a quick sword strike in, the witch will try to heal themselves with a potion of healing, leaving the player to attack them without fear of retaliation.

So by the sound of it, if you haven't yet got a bow to fight (which early on you probably don't) the best option is to dodge their first attack, then charge in swinging your sword. With a charge, your first strike will probably be a crit that will force the witch to heal, and then you can barrage them with sword blows until they're taken down.

This might be counter-intuitive with other mobs around, since rushing in is the last thing you'll want to do against them. It would probably be a good idea to take out any wandering mobs first before dealing with the Witch, if they're all gathered together. If they're not, then it'd be best to charge the witch and take her out very quickly, before running away from the rest to attack at leisure.

The best answer is the same as with any powerful enemy (like a Creeper until you know how to fight them):

When trapped in a "knee-crusher", Witches are as helpless as any mob (bar their ability to drink potions, just swing faster!)

(picture: a Witch in my mob slaughter zone) 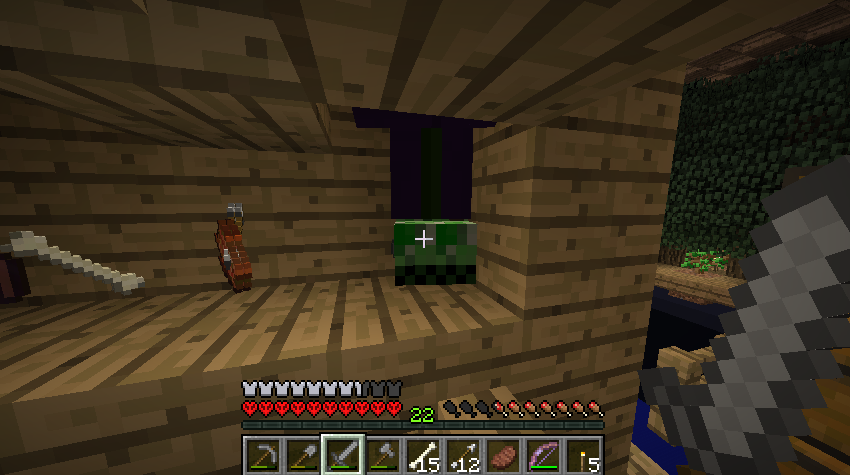 As of the specific situation when you are tagged with Poison and are undergeared to deal with it - simply run! Run to safely, wait until the Poison wears off, pause, have a Twix, and follow the advice above.

I just came across this myself recently, and worse I didn't even know what witches were (I just thought a villager was lost).

Hopefully you have some food, and can heal yourself. I just ran in attacked, then run away after a few hitpoints lost (poison usually got me pretty quickly), healed health and came back. It's worked for me so far, but then it's required a little bit of food (which you should always have anyways)

A bow would be the best weapon, but the best strategy is to avoid them all together. Trust me, minecraft has changed a whole lot, but you have to adapt to each update. For example, in this situation, the wiki will be useful, or you can go into creative and try out some different weapons

Try serpetining while running towards the witch. It works with skeletons too. You dodge the arrows and potions while getting closer to attack. If you don't know what serpetining is, it's running left, right, left, right, all the while moving forward.

Best if you have at least a simple sword (Stone would be the best for early minecraft days) and the witch is a bit far ( 20 - 30 blocks) than rush towards it and start hitting. Don't Stop!

Suggestion: Get her in a space where at least three sides are 1 up and attack from the opposite side where it is 1 up. Jump and when you drop hit it (Causes Critical Attack!) You may die so don't take any valuables. The witch explodes after getting killed, run away from it!

8
How do I kill a witch in minecraft as a beginner, no weapons, milk, or advanced items in inventory
4
How to deal with witches
-3
What is a good strategy for killing Witches in Minecraft?

37
What can I do to help orienting myself in Minecraft Alpha?
15
Dealing with creepers on a new game
0
Minecraft - Weird spawning behaviour
14
What is this weird sword Icon that appears when I use a tool or weapon?
2
My Mojang account has disappeared; can I still play Minecraft?
6
Could two packs spawn in the exact same block within seconds?
3
What is the hardest to kill zombie that can spawn naturally?
5
How do I make a continuous loop of minecart rails without the carts merging into one another?