I currently have a Logitech MX 5000 keyboard for my PC. I've been playing WoW on it for about 2 years (maybe longer, but I'm not certain), but it has a problem where it suddenly just "wigs out" on me. The keyboard is wireless (bluetooth, I think), and I'm certain that this has something to do with the problem. I'll be playing WoW and all of a sudden the keyboard will stop responding and it shows that it's disconnected on the LCD screen, and then it usually takes about 10 seconds for it to reconnect. However, I digress...

I'm seriously looking into getting a ZBoard, but I'm not sure if its overkill for WoW. So I'm hoping to get some input from the gaming community, and more particularly from gamers who have this keyboard.

I do play some online shooter games (black ops lately), but not nearly as much as I play WoW.

Also, I've tried to make this question non-subjective, but if it still appears to be so then if anyone has any ideas on how I can edit it in order to make it non-subjective I would be much obliged.

By in large, I optimize for the fewest false negatives over false positives. The reason being that a false positive is usually easily observed even at 200 APM. If I accidentally select my Hatchery when I meant to select my Overlord I get a visual indication (something changes). In the reverse case (I think I've selected my Hatchery and I am still on my Overlord) nothing changes. Since the human visual system is built on change its easier to notice the false positive than the false negative.

You could also add Ghosting to this list but modern Keyboards rarely exhibit this behavior.

There are three kinds of Keyboards in the world: Mechanical, Scissor and Rubber (I'm ignoring anything based on Cameras for the moment as those are rare). Rubber Keyboards (the most common) are based on using a Rubber Dome as a spring. Scissor use a harder plastic as a Spring. Mechanical use a metal spring as the contact. I'm not going to spend time breaking all of these down I'm just going to cover Mechanical, a longer explanation can be found here.

Of the three Mechanical is by-in-large considered the most superior. Mechanical keyboards use a spring that provides for a very different tactile response when the key is considered "pressed" then when it is not. This difference (shown below) guarantees that you do not consider a key "pressed" when it has not been. This is crucial to avoiding false-positives 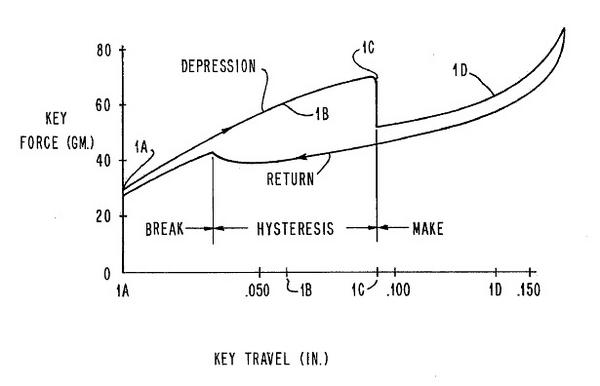 In many Mechanical Keyboards this also makes an audible "clicking" sound to reinforce this concept.

N-Key Roll-Over is the idea that a keyboard can only tell when a maximum number of keys have been pressed. For high end USB keyboards this is usually 6+4 or 10 total keys (4 modifiers). It should be noted that USB stipulated a maximum of 6+4 key rollover but this does not guarantee you will get the full 10 on your keyboard. By comparison a PS/2 keyboard provides full N-Key Roll-Over. Because its keys use interruption instead of polling (more on this in a second) this means you will never be in a case where you hit too many keys at once and some of those keys are not transmitted. Again, this cuts down on false-positives

There are two different ways key sampling can be provided. Either the keyboard can transmit a new signal every time a key changes states (using an interrupt) or the computer can poll the keyboard for its current state. Unless you're hitting 400-500 APM this is actually a philosophical difference more than a practical. Because keyboards poll very quickly it is almost meaningless to talk about the difference between a polling keyboard and an interrupt keyboard.

So after all that let's evaluate your question: I'm seriously looking into getting a ZBoard, but I'm not sure if its overkill for WoW

The ZBoard is a USB keyboard (thus limited to 10 Keys, thought they only say 7). It does not have Mechanical Keys. It discusses having built in Macros (so almost certainly polling).

Based on what we discussed this is not a high-end keyboard and certainly not worth your time.

I don't know a lot about BlueTooth or Wireless Keyboards, but I assume they work similarly to USB.

Not the answer you're looking for? Browse other questions tagged pc keyboard .

8
Mouse and Keyboard for XBox 360?
4
How do I perform directional inputs for Street Fighter 4 on a PC Keyboard?
16
iCade bluetooth keyboard mappings for MAME?
2
How to use keyboard controls with Need for Speed: The Run
5
Recommendations for switching for a long-time Keyboard Turner