How can I make it easy for a player to select a choice at a rail junction?

So rail junctions are a nice simple way to pick between two destinations for incoming minecarts, however the challenge is making an easy way for the player to pick which direction they want to take as they approach the junction.

The simplest method is a button that they have to press while approaching the junction in the minecart: 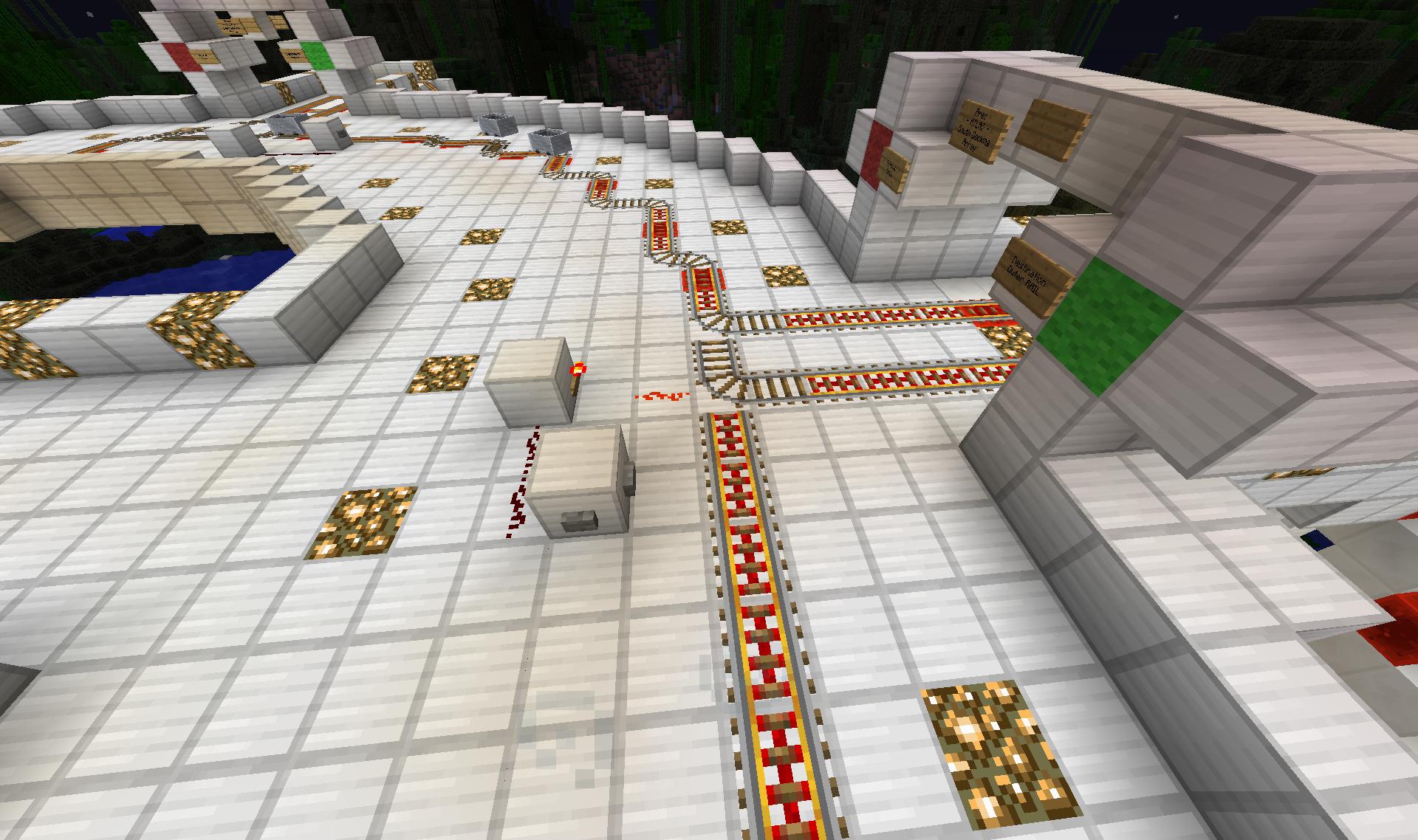 Pressing the button causes the rider to switch onto the outbound track. Not pressing the button means they continue on the loop to the next junction. The problem here however is that the button is very hard to hit correctly while riding the rail at full speed.

What is an easier way for a player riding on a minecart to activate a junction so that they can take the alternate pathway? To be clear, the player should still have the option NOT to activate the junction and take the default path as well (as seen in the image above).

Instead of a button you can use a trapped chest that the player needs to open; for this is much easier to hit. Another upside is that the chest closes automatically when the player gets out of range.

The other answers are wonderful, but I have another option you may find useful. Stop the cart as in Linuxmint's answer, but use a repeater delay to automatically start it again after a short time if the user doesn't select an option. This allows cart riders who just want to stay on the default path to go AFK during the ride, yet still gives riders who want the alternate path plenty of time to push the button.

Here is a screenshot that shows what I mean. If the user does nothing, they will continue to the right. However, if they press the button, they will take the alternate route. 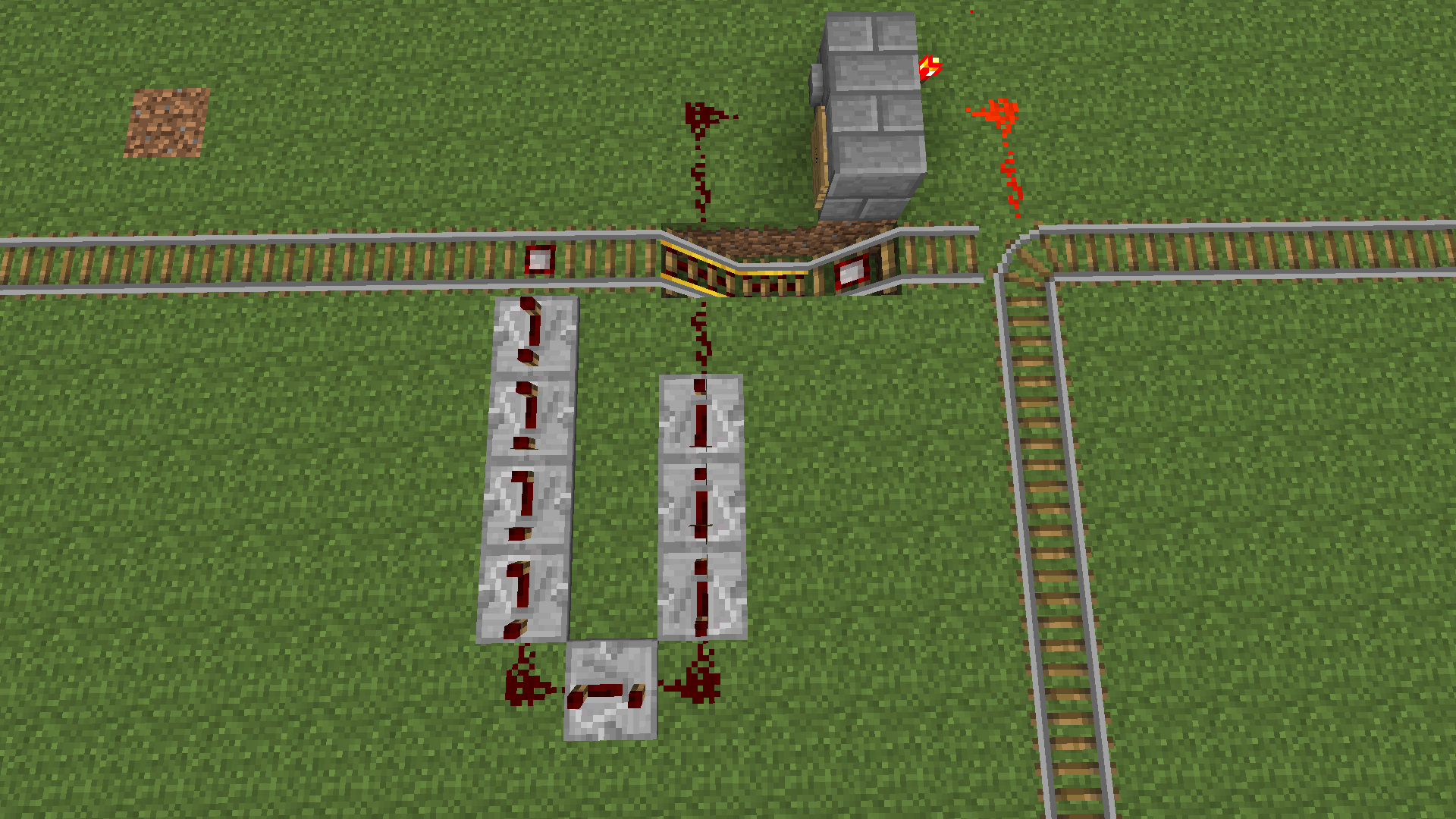 One option which I have used before can work rather effectively but can get complicated very quickly.

Basically you have downhill (pointing downhill toward your junction) powered rails close to the junction on all of the 3 ways. (powered off). I'll call this powered off rail the "direction pick rail".

Hopefully my directions are not too confusing; and while this is not the smoothest system, it does work. If anyone has a better answer I would really appreciate it for my own minecrafting. 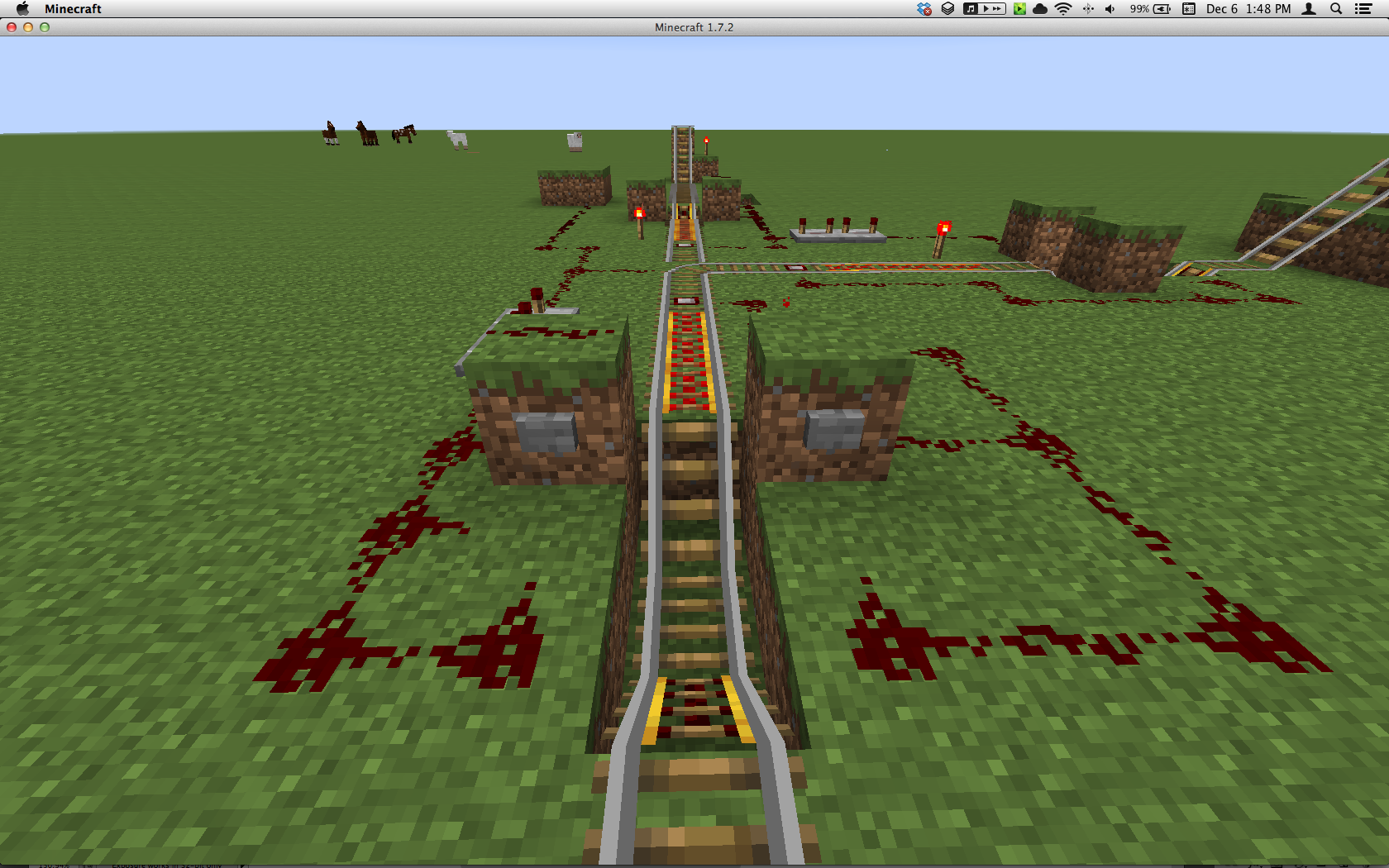 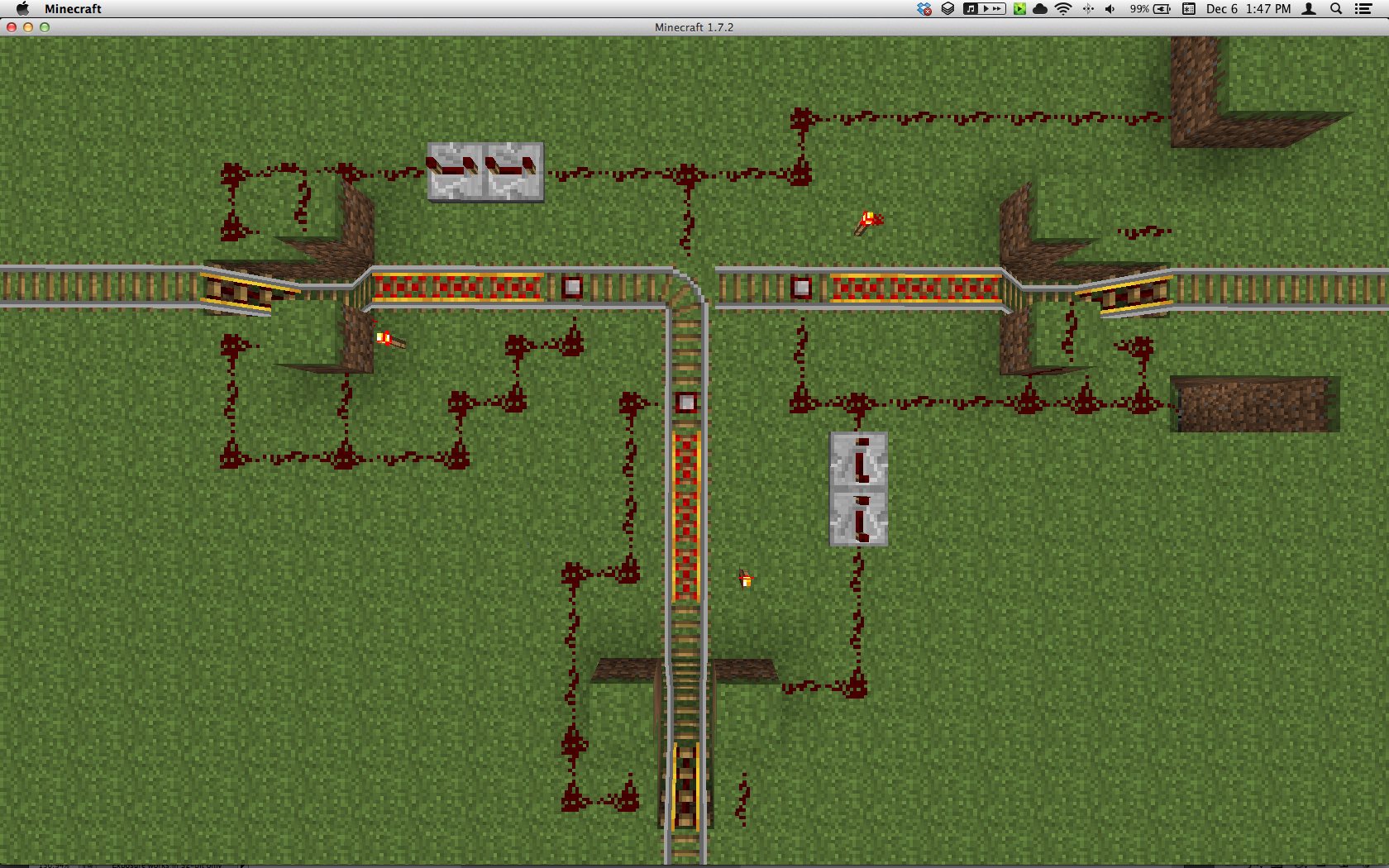 As you can see in the bottom picture, Minecart stops on the downhill powered track where the driver clicks the button to where he wants to go. The button both flips the junction track, and powers the powered off track the Minecart is sitting on. The minecart continues thru the junction and in the chosen direction, running over the detector rail which powers on the powered off rail that your minecart is about to cross over so you don't get stopped again past the junction.

I'm trying to do something similar which may answer this question provided that you know the destination from the beginning and don't want to change mid-trip. Perhaps there is a way for a player to make a choice in the originating station that would cause every junction to automatically choose the correct rail configuration (right, left, or straight) to get them to their desired destination. That would ultimately be the easiest for a player to traverse junctions as they just sit and ride.

I had originally posted this as a separate question but was directed here as mine was a duplicate of this one. @user232393 had proposed some great possible solutions around using a separate chest minecart sent along with the player, containing certain items which would "instruct" each junction which way to send the player. I'm working on that now but wanted to bring it up in case that concept helps.

I'll post more details as I get them. But basically, I'm thinking of loading a chest minecart with certain items and sending it in front of the player's cart and at junctions, it would use hoppers configured sort of like sorters to make the choice. Based on a selection, the chest cart would be loaded with a left, right, or straight item for each intersection. We'll see! 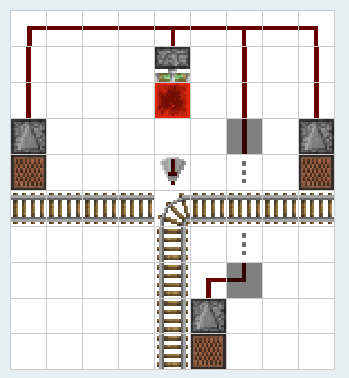 This doesn't require stopping. The player can easily punch the note block while riding the cart at full speed, and the signal (at least in Java Edition) from the observers is just long enough to make the sticky piston toggle the position of the redstone block (essentially one of most standard T flip-flops).

Determining whether the note block needs to be punched or not in the nick of time may be a bit tricky, so it's good to tap into the redstone signal from the redstone block, and add direction indicators along the track. You may use redstone lamps, but I found them a little unclear, so I came up with indicators based on magenta glazed terracotta (the one with arrows) - moving them up or down depending on input, so only one is visible through the "window" to the oncoming player. 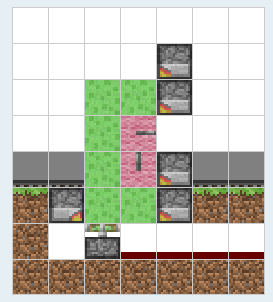 (Sorry for the pink wool - the schematics don't support glazed terracotta yet. The slime block bracket is needed because glazed terracotta can't be pulled by sticky pistons. Instead of furnaces you can use any blocks not sticking to slime blocks - obsidian, melons, note blocks etc)

4
a graceful optional station
1
Can a minecart junction automatically configure based on something chosen in the originating station without command blocks?

60
Is there a way to keep Zombie Pigmen off of minecart tracks in the Nether?
16
Moving Stopped Minecarts with Powered Rails
2
Tekkit and water tanks
4
How can I make an unsupported inclined rail?
13
Two way minecarts on a single track
2
How do I make a falling_block that I can select blocks through?
8
(Java Minecraft 1.14.2) How to recursively (or otherwise) determine if a closed 2D arbitrarily sized rectangle of blocks has been placed?
1
Can a minecart junction automatically configure based on something chosen in the originating station without command blocks?
3
Keep the Nether loaded
5
What is the Java Edition method of Bedrock Edition's /ride command?