British SAS Emotes: Are we rushing in, or are we going sneaky-____ like?

Simple question: when the British SAS emote in Counter-Stike : Global Offensive, what do they say?

I've found multiple unreliable sources that claim to know the answer, but I am skeptical, especially since the sources do not agree with each other. The SAS wiki, editable by the community, is not a reliable source in my mind (http://counterstrike.wikia.com/wiki/SAS), and neither is Urban Dictionary (http://www.urbandictionary.com/define.php?term=sneaky-beaky).

What do you guys think?

The accent makes it difficult to determine what's being said without having the actual voice actor on hand. However, using Google we can determine what the correct phrase is (and therefore, what he most-likely meant to say).

Google gives the following estimated result-sizes when searching for these phrases (in quotes):

Additionally, google n-gram shows that only one of these phrases is used in real literature (or at least, the literature they have indexed):

Therefore, it's easy to conclude that the correct phrase is "sneaky peeky".

[Edit April 2015] People have pointed out that there's now a CS:GO sticker with the phrase "sneaky beaky" on it. 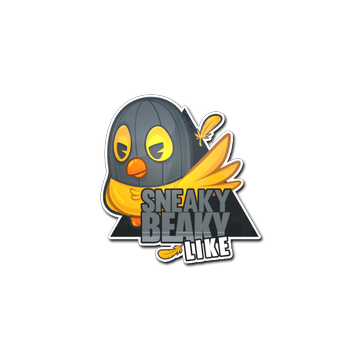 According to the author of that sticker, it's supposed to be a joke:

Haha, it's "sneaky peaky/peeky".
[..]
This is just a play on words, because a) it's really hard to tell what the hell they're saying in game; b) chickens are a huge part of cs and c) chickens are sneaky, and they have beaks... sneaky beaky. Yeeea.

It's sneaky peeky, its a Scottish accent and to any Scottish person it's as clear as day. The Sneaky 'Beaky' sticker is a joke, with a bird on the sticker....

It's sneaky beaky. They released stickers with the quote

I understand that the wiki is not necessarily a reliable source but where can you find another source other than the audio played in the game or the game's wiki ? I think that this is pretty much a reliable source.

sneaky-beaky. You can hear that B well in quote.

FishikKFishikK
1
Add a comment  |
Highly active question. Earn 10 reputation (not counting the association bonus) in order to answer this question. The reputation requirement helps protect this question from spam and non-answer activity.