How to use the Titan Extractor?

On Warframe, they recently added a new item called the Titan Extractor. After building it, I have no I idea what I need to do with it. It says it goes to planets to collect resources, but how?

Once you've built the extractor (the blueprint is reusable), you can deploy it to any planet you've fully unlocked (just unlocking all missions there is enough, no need to beat everything). There will be a button labelled "Deploy Extractor" on the left side of the mission select screen for that planet. Press that, then select which extractor you want to put to work (if you have more than one).

Once the extractor is deployed, a 4-hour timer will start. You can return the extractor at any time, but that won't give you any resources, but incur no penalty of any kind. Once the 4 hours are out, that same button will change to "Claim", which will give you the resources collected and start the extractor again on the same planet.

The little red bar under the extractor's icon shows its remaining integrity. Once that drops to 0, the extractor is destroyed, no resources can be claimed from it, and it can't be reused. You'll have to build a new one. Damage seems to occur randomly while it's deployed.

Leaving an extractor in your inventory and not in use replenishes its health over time automatically.

To deploy it you have to go to the mission selection of the planet you want to deploy it to and you should see a deploy button over the box that indicates what resources you can get from the planet. 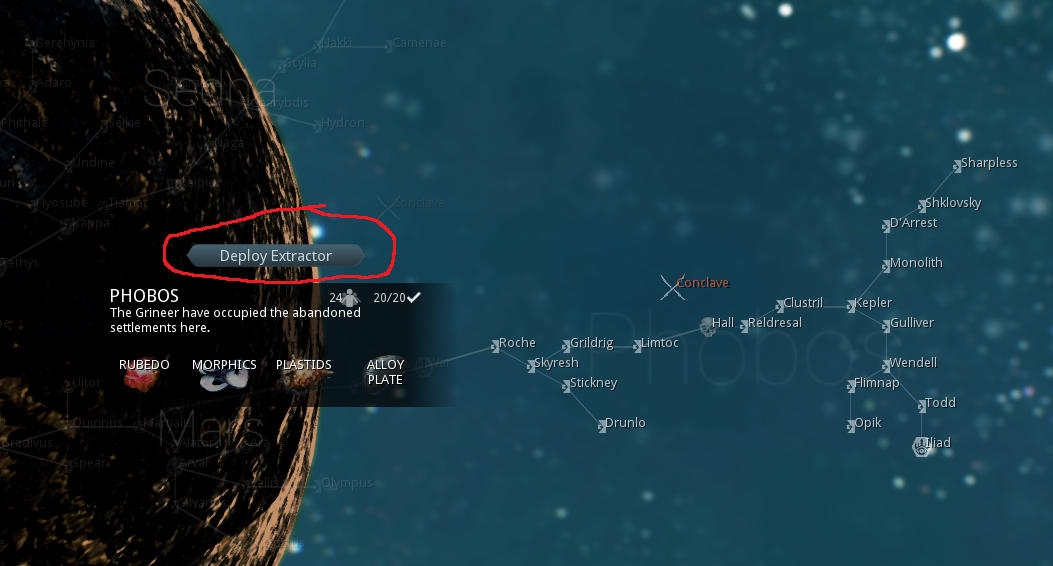 According to the Warframe wiki this can only be done on plants where you have accesse to all missions.

You get one for every five mastery ranks.

10
Where can I get all the warframe parts?
8
What do "level" and "difficulty" refer to?
1
What does the Spare Parts mod do?
2
Warframe will not update on Steam
3
How does Warframe experience work?
9
How do I unlock more planets?
1
"Offline, segment required", where do I get those segments?
1
How do I complete the 2nd portion of the raid on Vay Hek?
0
New liset segment