Does a species appearing automatically unlock the special bitizen (?) in TDS?

I've noticed a few species in TDS that have appeared in my album, but it has not unlocked their special characters... I have noticed that once they appear the price to unlock them for Bux goes down to 1 Bux.

Does anyone know if these characters ever unlock on their own, or do you have to unlock them in the store for bux? In other words, is it a special process by which these ? bitizens unlock in addition to the notification of the species unlocking?

Here are photos as another example: Look at the Toydarian in both photos, and just to muddy the water some, see that Snowtrooper? I routinely get him as a ? bitizen. Anyone have any idea WTF is going on here? 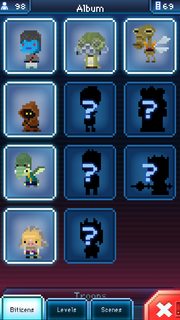 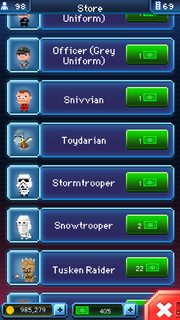 I too have had the same experience with having the character, but not getting the occurrence of the scene.

I believe that the scene occurring is a random event based on if you have the characters.

If not, then it is one of the large number of bugs that are in the game. The developer has said they are working on them, but until then, this may be the cause of one of them.

I have had the toydarian unlocked in my album and available in the store for 1 bux, yet seen many appear as ? While still available at the store.

When used from the store for 1 bux, he came and was delivered to a floor and checked back in the store and no more toydarian for sale, maybe the store is one use way to get a ? character?

The initial, expensive, purchase of a character seems to be to throw them into the random lineup of people that go to your elevator. When you do the "one buck thing", it is to give you a single shot of said toon, as the next character on your elevator.
Now with that, in my experience, once you unlock the scene (for instance the Mon Cal aquarium, with normal mon cal) that species stops showing up, at all. I unlocked said aquarium about a week ago, and haven't seen a normal mon cal since, and I was getting a ton of them prior to that. Same with jawas and droid store, though I never got jawas that didn't have a "?".

When a new species appears they seem to do so in waves, but then nothing for a long time. Like I got the duros, devaronian, and chadra-fan all within an hour of each other. But it's been days since then and they were the last new characters I received. Prior to that, it was another wave of 3. (like celebrity deaths).

I have to wonder what is the catalyst to unlocking species/characters (in free mode), if there is one. I am still waiting on roughly 2/3 of the characters to unlock. I've got 57 levels but no Gam Guards, Weequays, and a ton of others.

Not the answer you're looking for? Browse other questions tagged star-wars-tiny-death-star .

1
Does unlocking bitizens via the album make them available for play in the game?

4
How do you earn special costumes in TDS?
0
Is there a way to know which will be the next bitizen to unlock in TDS?
1
Does unlocking bitizens via the album make them available for play in the game?
3
What's the difference between buying bitizens from the store and buying from the album?
1
What Does the Movie Icon in the Bitizens Album Mean?
2
Does the Snowtrooper actually unlock Scoop of Hoth?
1
Bitizen Store Restock
1
Unlocking Imperial Marches Retail level after the event ends?
3
How to Unlock Mon Cala Aquarium Scene
1
Dream Job no longer giving Bux