Is it worth stock piling every imperial floor item available?

I've been creating imperial items non stop. I currently have 11 imperial levels and have noticed the imperial objectives have lately not been using some of the early stage imperial floor items I've been stock piling.

These items include Rebel Secrets and Security Codes. I currently have over 35 of each, and I'm just wondering if later objectives even use these? I've gone through 10-15 objectives without using them so far. I've also noticed 2 other items that I have been using a little bit but just wondering if I should stop collecting them at a certain point to save money as I always spend the 1000 coins to collect imperial items as it pays off huge in the long run.

These items are Salvage at 23, and Star Maps at 18. Also if you know when to stop stock piling other items this information would be helpful as well. Lastly if this helps at all I currently need 5 Lieutenants 6 battle plans and 7 defense grids for a reward of $71,910. I don't know if this information will even help you help me as I'm unaware if the Imperial objectives are the same or even similar between one another.

In short, stock piling helps with the imperial quests going forward. When you complete a quest, the next one may ask for an item that you have already stocked. So, in general, you will likely get paid back for those items you paid credits to generate. That said, you will do better in the long run building floors that generate credits as a means to make credits. And, if you are diverting too many credits to your inventory you will make less money over time.

In answer to the other portion of your question, many of the lesser items will re-appear in later quests, just in large quantities. 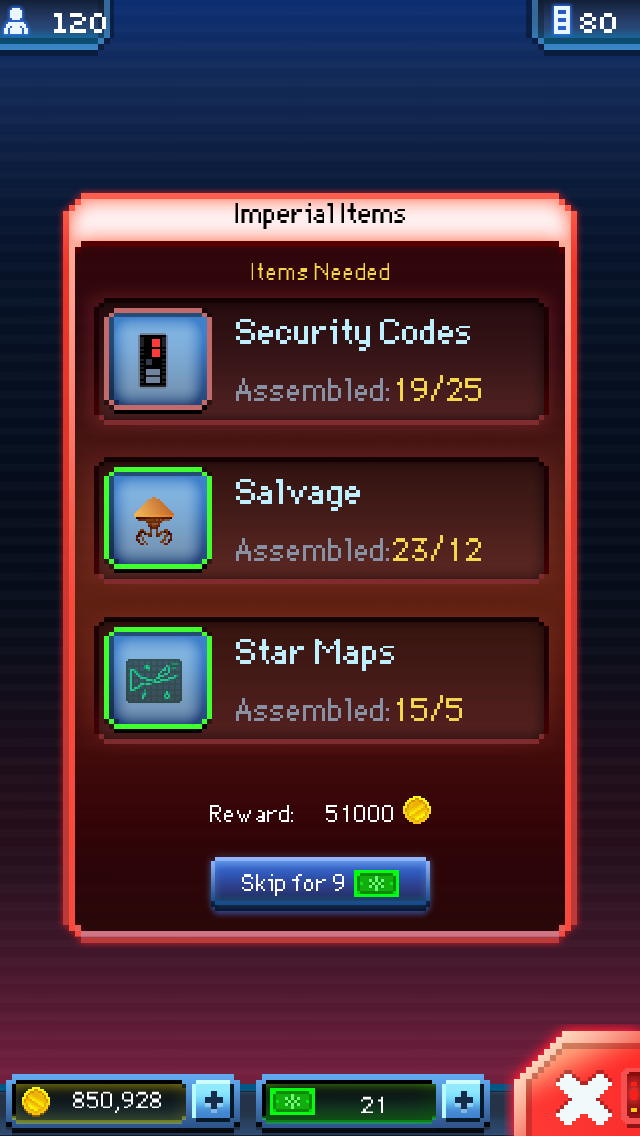 I would say that spending any credits to get the Supply Officer to stockpile is generally not worth it if your credits can be better spent on level building since you can generate more credits that way. I have noticed that the quest rewards have reduced dramatically as you go on - I think mine peaked at just under 200,000, and now it's 70,000. I'd rather stockpile credit for future content updates as doing the quest gives no additional reward other than more credit.

6
Ran out of quests

5
Are imperial levels worth building?
2
If I stock a floor and then remove the worker from that floor, does the item continue to sell?
2
Can a single imperial item be used to complete several imperial assignments?