What are the Bunkers & Badasses event class mods?

To celebrate the release of Tiny Tina's Assault on Dragon Keep, Gearbox put out a series of special SHiFT codes which grant special class mods to the player.

Since class mods gained by SHiFT codes are tied to the level of the first character loaded after redeeming the code, I've been a bit apprehensive about when or if I want to claim the codes. It would really help me out if I could know exactly what the class mods do, and what the range of their bonuses are. Unfortunately, I've had a hard time finding even so much as their names in online searches.

Does anyone have a list of the names of these mods? Ideally, I'd also like to know their minimum and maximum stats. But the names alone should be enough to help search for the stats.

The possible varieties of the TTAODK class mods are:

The prefix on these class mods determines what player variables (e.g. Fire Rate, Magazine Size, etc) are affected. The class mods will grant two of the following bonuses up to the specified amount (at level 61; bonuses could go even higher if you have the Ultimate Vault Hunter Upgrade Pack Two DLC which increases the level cap to 72) depending on class mod level and the full name of the class mod: 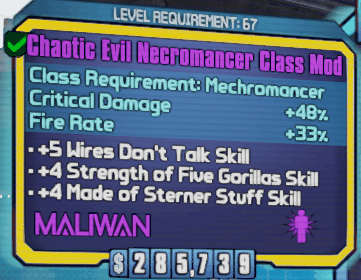 Not the answer you're looking for? Browse other questions tagged borderlands-2 borderlands-2-tiny-tinas-assault or ask your own question.

13
Does the Season Pass include preorder bonuses like the Mechromancer class?
4
Do weapon stats include bonuses from skills, class mods, etc?
7
Are all of Terramorphous' Class Mod drops the same?
9
What are the odds on the slot machines?
6
What are the max skill points Class Mods can grant?
8
How do I get the Mysterious Amulet, and what does it do?
11
What are the different kinds of shrines and how do they work?
0
Why haven't I gotten my head?
4
What is the Knights' weakspot?