What are the strengths of all the eeveelutions?

What are the strengths of each of the Eevee evolutions? For example, which of them have the best speed, or highest defense.

The base stats of the eeveelutions are spread as follows:

As you can see from the above,

All the Eeveelutions have a base stat total of 525, although that is spread onto different stats as Jerry points out in his answer, therefore 'Best' is not a term I would use when describing the various Eeveelutions. Each has different strengths and weaknesses - different Abilities and movesets and (obviously) different typing that allow any of them to fill different roles at will.

There are currently 8 Eeveelutions: 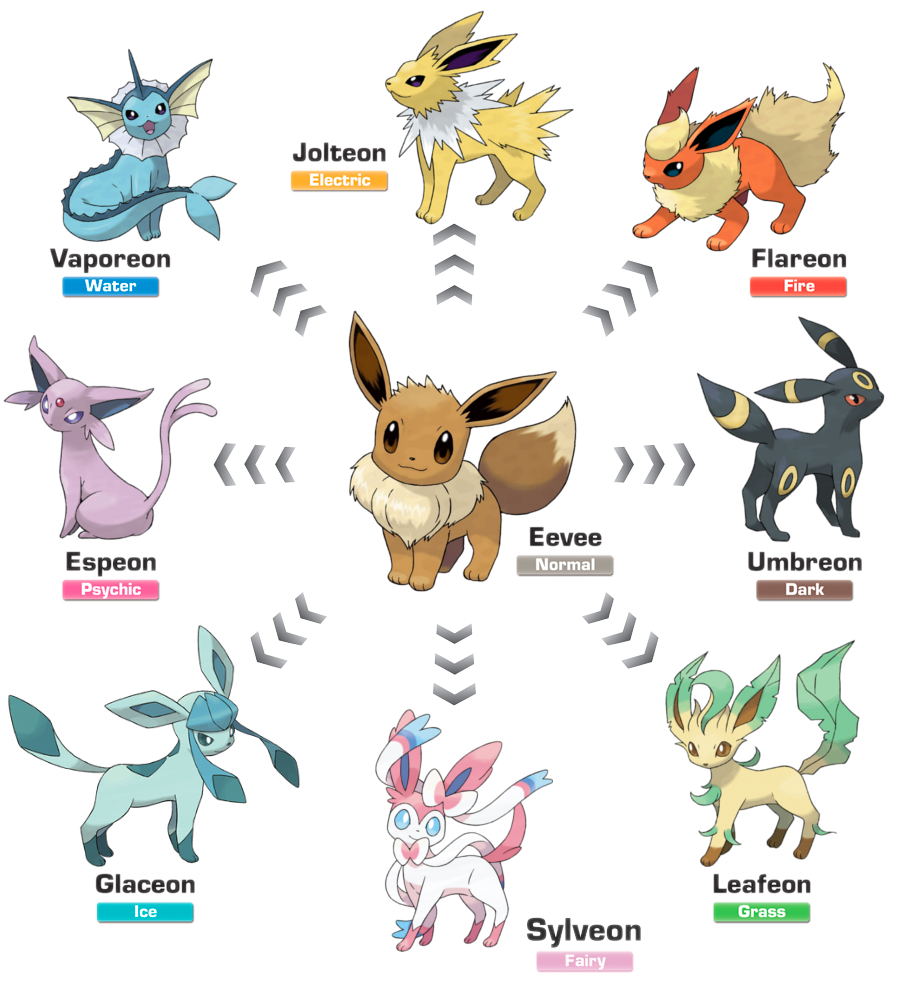 In terms of competitive play, Smogon has some good analyses for Black/White, and is slowly getting there with X/Y builds & movesets.

You can find the Black/White analyses here, although do note that some of these are slightly out of date:

Here's the current Sylveon thread as well, although note that nothing has been finalised as of yet.

However the ones I've used & found most useful are:

Although the nerf to Rain in Pokemon X/Y hampers strategies involving the Hydration Ability (status heal under rain, works great coupled with Rest), Vaporeon still makes a splash as a Tank/Healer with it's High HP & Defense and access to Wish (Egg move) and Protect. It also has a decent movepool to choose from including Surf and Hydro Pump, although I've had great success with Scald (gotta love that 30% Burn chance) and Ice Beam. Water Absorb is still a viable Ability, and works well as a switch-in to an enemy Surf/Hydro Pump, on in a Team environment.

Slow but powerful in Special Attack. Unfortunately Ice isn't the best typing defensively, It only resists itself and is weak to Fire, Fighting, Rock and Steel, which are common on many teams. Blizzard or Ice beam are a given, with Signal Beam or Shadow ball for coverage. The other two moves I'm currently running with are Wish and Protect. Wish is probably not the best move on Glaceon, simply becase it doesn't have the Speed or defense to pull it off, but Protect has worked fairly well.

Great Speed and Special attack, and OK Special Defense, but not much Physical Defense to speak of. It's ability Volt Absorb allows it to switch into enemy Electric moves like Thunder, absorbing them as health. I'm using Thunderbolt, Signal Beam, Volt Switch and Substitute, although I've found that I rarely use Substitute. Going off of the Smogon page for Black/White, a possible replacement would be Hidden Power Ice

The rest I haven't used, although like I mentioned earlier you can check out Smogon's Black/White pages for suggestions, although remember that they are for Black/White currently

Not the answer you're looking for? Browse other questions tagged pokemon-x-y .

3
In pokemon X and Y, what are the starting pokemon's final evolutions?
5
What are all the different Super Training Ball types?
2
By what amount does the Masuda method increase the chance of breeding a Shiny?
5
What is the difference between Mega Charizard X and Mega Charizard Y?
8
Where are the fishing spots surrounded by rocks etc, and do they actually increase the chances of catching fish?
3
What are the best places to horde EV train?
3
How does a Pokémon learn an unreachable move?