Where do I put spies in Civilization 4 to protect against rival spies?

I'm playing Beyond The Sword and when I want to build a spy I notice they supposedly: Helps Thwart Rival Spies:

Should I leave a spy stationed at borders? Should I place them cities? Does it matter where they are placed in order to effectively thwart rival spies? I can't seem to find any correlation to where I put them and my success rate of stopping incoming espionage.

The reason I ask is because I'm playing a world-scenario starting in 1000 as the Indian empire and the starting borders are all mountainous, that is, there are very few entrances I have to guard. They are quick to train and I'm getting constantly attacked by spies - not just in my cities but also towns, watch-towers, farms, etc.

I'm not sure if this has to do with anti-spy buildings (e.g. Intelligence Agency) or because I've stationed a spy in every city, but I'm seeing a huge increase in these messages:

If you have a spy in your city, it helps increase the cost for enemy spies to do an action in that city, and also helps albeit rarely for you to detect the enemy spy.

I'd put them in my cities if I was worried about espionage but they seem to be more productively used offensively then defensively for the slight improvement they make helping "thwart rival spies".

I have never placed them at borders, I'd imagine this would be a lot of work for the same detection with less done to actually prevent or increase cost of attacks.

Overall you can't stop them from running missions on you, but using spies this way increases their cost making it become very expensive for them to continue to do so.

As Ward says, spies stationed in a city will help detect and prevent enemy espionage. They can also do a mission that will temporarily make all espionage missions in that city much more expensive, at the cost of some of your own espionage points. One of the best things you can do though to prevent people using espionage against you is to gather espionage points against them. You can probably guess which of you neighbors is spying on you (especially if you catch a spy), and by cranking up your espionage spending against that neighbor, you will make it much more costly for their spies to do missions. This has a long-term effect, and is countered only by them doing the same thing, increasing their espionage spending against you.

I'm afraid this is little more than speculation, but I've noticed that the Sabotage Building spy mission is sometimes greyed out, and I suspect it's because the AI has a spy present in that city.

The mechanics for human-vs-human spies seem different so I can't confirm.

An AI city with spy present: 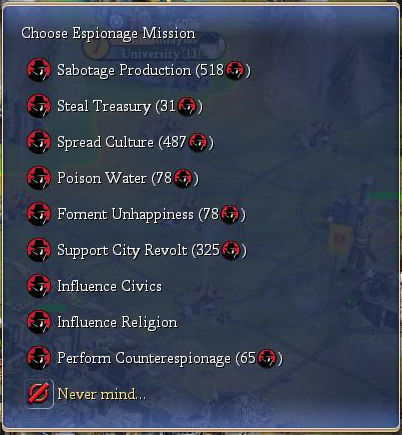 An AI city with spy not present: 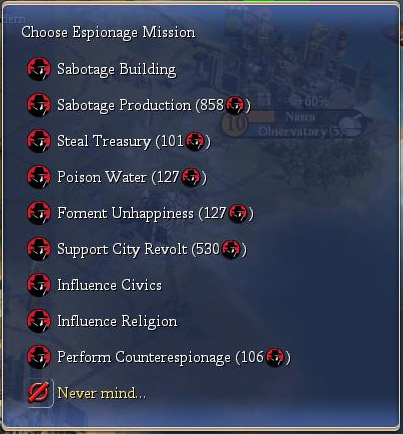