What is the use of the Pilot's Armor in SW:TOR?

After buying and subscribing to Star Wars - The Old Republic, I received multiple packages with Pilot's Armor. What is the use of this Armor and why is it called Adaptive Armor? Is it of any use for me as Juggernaut? Does wearing it give me any benefit in a space battle? As far as I can see, it is less useful than my current, Medium Armor. (Didn't replace it yet with Heavy Armor) 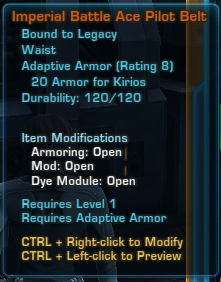 In SWtoR, there are four primary armour types: light, medium, heavy and adaptive. Adaptive is special in that it is automatically the heaviest that your class can use. That is, if you're a Consular/Inquisitor, it is light, if you're a Vanguard/Juggernaught, it is heavy, and so on.

Once upon a time, before adaptive armour, all custom armour sets such as those purchased from social vendors had a specific armour type, which limited their usefulness. So you wouldn't see a (viable) juggernaught tanking while wearing Leia's slave armour, for example. Adaptive was added so that these custom sets could be worn by and useful for everybody, with the exception of some male/female-specific sets, which are only appropriate for characters of the respective gender.

The pilot's armour you link is a custom armour set that is a thank-you from the devs for being a subscriber during the Galactic Starfighter beta. Like any other adaptive armour, its armour type will be the highest you can use (if I read correctly in this case, that would be heavy), but it grants NO bonuses during starfighter combat; you can just wear it during normal play. That said, just like any other armour set, it's as good as the armouring and mods you put in it.

I haven't played for a while, but as far as I know adaptive armors are wearable by every class and adapt to the armor type your class uses. You just have to upgrade your Armoring slot to increase it's armor value.

You can think of it as a cosmetic armor where you can just take the modifications from another armor and put it into the adaptive one. Or if you know WoW you could say it's an armor where the stats are entirely dependent on gems.

Just make sure to only use modifications that are usable by your level, since you can't wear the armor if you have a level 30 armor modification but you are level 29. (same of course for the other two slots)

In addition to the other answers, note that the Shield icon on this armor means it is Bind to Legacy (also indicated in the tooltip). Legacy gear can be mailed to any of your characters on the same server. This is primarily useful at endgame, where you can share the same gear between a Marauder and a Sentinel (for example) in order to gear up faster and have good gear from day 1 if you start another character.

12
What is the difference between armor and rating?
4
What are the various SW:TOR servers named after?
2
Storyline progression in SW:TOR
7
Is it worth upgrading my equipment for warzones?
4
Are any crew skills profitable on their own without the GTN in SW:TOR?
12
Strategies to avoid being underleveled as a F2P in SW:TOR?
7
In the Star Wars timeline, when does SW:TOR take place?
2
What Crystals should I use for Sniper/Gunslinger?