In Riven, why are there six marbles for five domes?

I know I'm caught up in a trivial detail, but everything else in Riven: The Sequel to Myst is wrapped up so neatly. A lot of what's encountered is tangentially explained in characters' journals. The "puzzles" feel like they've sprung naturally from the world rather than being some arbitrary obstacle in a video game. The result (IMO) is a rich, immersive and impressively woven narrative.

For instance Gehn's laboratory journal explains the significance of the nearby frog-catching device, . However, from the same lab journal (entry 83.5.14) he writes

I have been cataloging the “natural” elements of this Age for nearly thirty years now, yet still I continue to find evidence of the D’ni’s preoccupation with Five. As a boy, it was very clear to me that the number five had a special significance to the D’ni society — from the ancient heraldic emblems of the ruling elite to the humble homes of the commoners, it was ubiquitous. Its presence here is obviously a direct reflection of the minds that designed the texts that I used to compose this Age. [...]

While most of my constructions have been based on D’ni designs, I see now that the ones that I have imbued with the power of Five are clearly the most beautiful, the most perfect. And, I believe, the most structurally sound.

I am still attempting to determine how the D’ni color symbology reflects this superior design principle. Although superficially it is based on a six color system, I am convinced that there has to be a deeper connection to Five. I will continue to investigate.

On Riven, the number system and the letter system are based on the "power of Five", so the six-symbol colour system really stands out. Here it is by the way:

These symbols appear on the five spinning domes--presumably constructed by Gehn--that contain linking books to his age. However there is five "transitional" symbols connecting each pair of the original six, resulting in 6x6=36 total symbols on each dome. 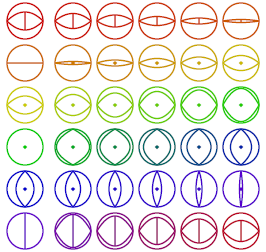 So unlike everything else, the colours are based on a system of six, and Gehn seems to be going along with it despite his preoccupation with the "power of Five". It wouldn't be so hard to have a five-colour system--just remove orange. In fact Newton's famous ROYGBIV spectrum was originally five colours (RYGBV) before he added orange and indigo to obtain symmetry with seven-note musical scales (octaves). It just seems to simple to be overlooked by the developers, who went to the trouble of making up their own language etc.

For me the worst part is the marbles puzzle. Each of the five spinning domes is associated with a colour, and you can determine four of them through the nearby viewfinders. However the fifth is inaccessible until after you solve the puzzle (to the best of my knowledge) so you end up having to guess the final colour (granted, from only two choices). Maybe it's not a big deal, but you can solve every other puzzle in the game with zero guessing, so to me it sticks out like a sore thumb.

To summarise, my questions are:

6
Why do the prison ages differ in Myst IV: Revelation compared to Myst and Riven?
7
How is the sequence of animals in the stone room on Riven supposed to be found?