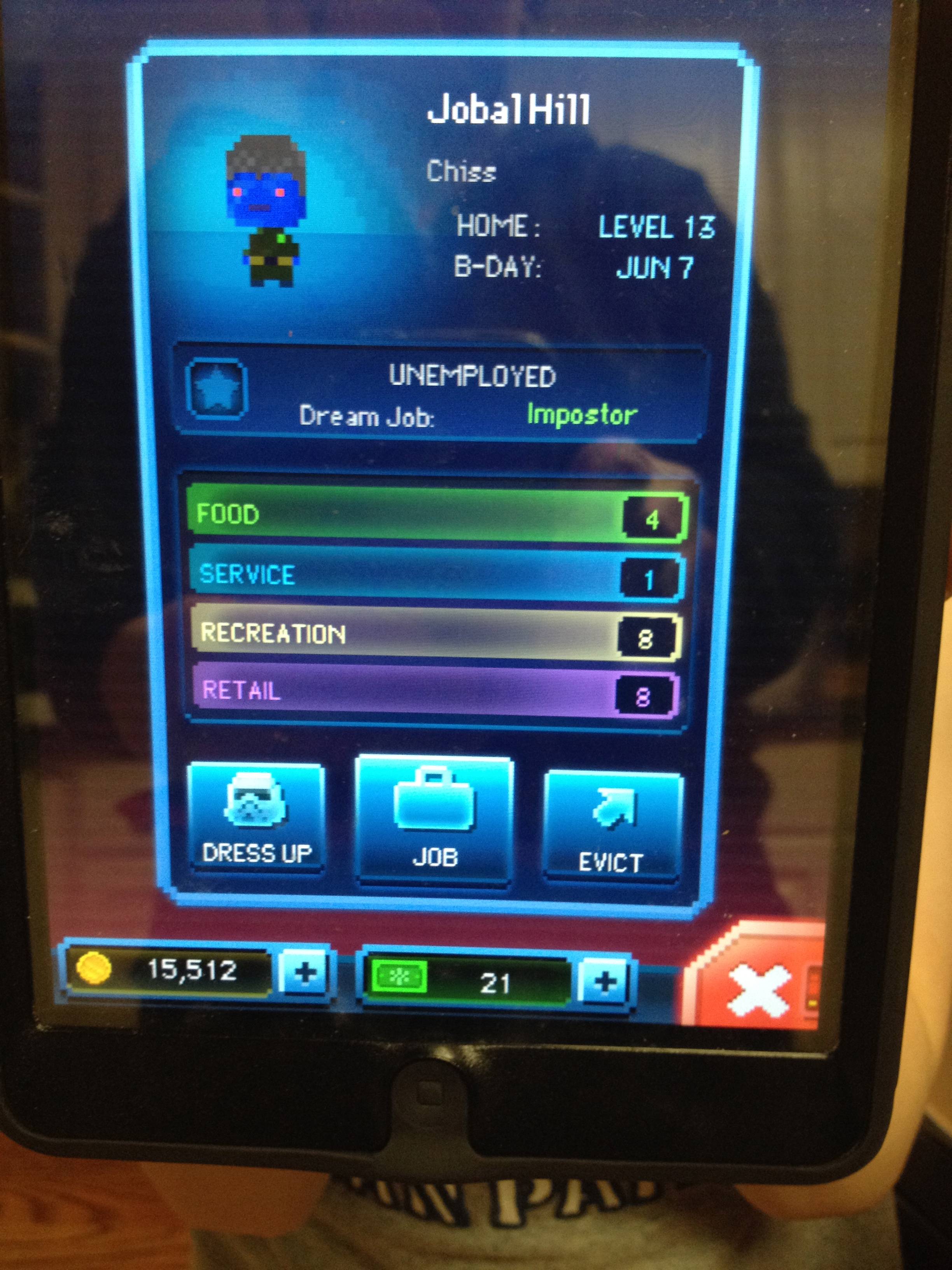 Has anyone else seen a worker show up in their "tiny death star" with "imposter" listed as their dream job? I've been playing for a few weeks on two devices, and never seen one before, however my son got one in his tds this evening (it was one of the blue-skinned aliens to boot). Where do imposters work?

I just got a human like this, could it be that they have a dream job that does not yet exist? This morning it told me a sandwich store and something else had been added, but it still says 10/10 food levels, she's got the right font colour…

Edit: CONFIRMED restart TDS and the dram job will be bongo sandwiches

Edit 2: in your case as recreation is higher than food, it'll probably be Planetarium instead

I had the coolest thing happen with an Imposter level.

I added an Imperial level, and it became an Imposter level. I just had to spend 100 Credits, and almost immediately it would earn 1 Imperial Service Medal. As I was trying to earn 985 of them for Service to the Empire rewards, I kept collecting more and more of them and eventually earned R2-Q5.

Now that Imposter Imperial level changed into the new Trooper Barracks level. I noticed at the same time that I have a bitizen who wants to work at Imposter, but now it has changed to a different new level I don't own yet: Cloth Fabricator

So it seems that Imposter levels can be Imperial or Shops. I'm sure I couldn't have taken my bitizen down to the Imperial level, but maybe if I had built some sort of retail level instead, I could have delivered him there as others have reported. As it was, I scored a ton of Imperial Service medals and a couple rewards.

Or it'll be a dream job for Imperial Marches ;) it appears that the added dream jobbers for the Limited floor as well. I got one anyway

I actually got a guy with the job, and then got the level. I built one of the new residential levels and it turned into a green shop that sold Impostor 0. I got a buck for getting the guy to the shop. After a restart, the level became Apartments and the guy was gone. Odd.

Found an imposter as well. Rebooted the app and a bunch of new levels showed up in my list of build able levels. The imposter's dream job changed to Kashyyk Shack (purple). Seems like another "bug" since I can't build any of the lnew levels even though they are in the list.

DIFFERENT SUBJECT: I'm getting tired of the constant changing of build values / time to complete for the imperial levels

I also had somebody with dream job "Impostor" (in green). After a while (maybe restarting the game) it turned into "CHISS HSP", and it stayed that way. As in this other answer, it is a level I don't own yet.

Moreover, unlike most level (and like Imperial Marches, Endor Adventure, Kashyyyk Shack, and a few apartment levels) this one cannot be unlocked with imperial bux — but that seems not a rule, since I would be able to unlock Bongo sandwiches, yet in this yet other answer the Impostor dream job turned into "Bongo sandwiches".