I bought the Quest for Glory pack on Good Old Games, and like most GoG games I tried to add it to Steam. Now, QFG 1 through 4 are all DOS games and run via a packaged DOSBOX emulator GOG distributes with each game, and there's a shortcut in the game's folder that "launches" the game.

Adding these launchers to Steam via "add non-steam game" doesn't really work. You try, it fails, then try again and it looks like it works, but the shortcut doesn't properly make it into Steam. Sometimes the icon doesn't show up in Steam at all, sometimes a DOSBOX link makes it into Steam, but it doesn't actually run the game.

How can I launch these DOSBOX games directly from Steam?

GoG.com DOSBox games start the DOSBox executable with some configs as parameters. You will have to do the same when adding the shortcuts to Steam.

First of all, pick your game. I will pick Ultima Underworld 1 because I have it installed. Right click on the desktop shortcut generated by the installer (if you don't have it on your desktop anymore, check the game's installation folder, there is one there; mine is called "Launch Ultima Underworld 1"), and see its properties: 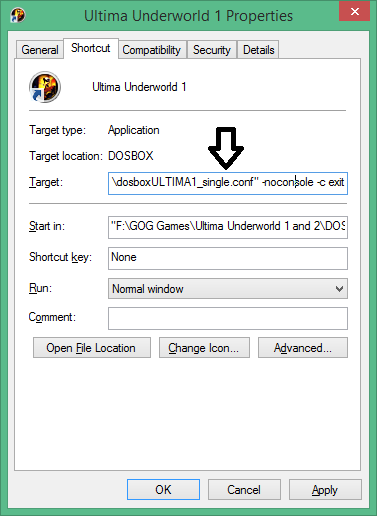 The shortcut's target is what matters to us. Copy everything in there, and keep it for later. In my case, the full field looked like this:

Go to Steam, click on Games in the top menu, then on Add a non-steam game to my library. Once the game list window appears, click on browse. Find the DOSBox executable that's being used by your game. In my case this was at F:\GOG Games\Ultima Underworld 1 and 2\DOSBOX\DOSBox.exe. Add that as a game.

Once done, find the game you added in your games list. Right click on it, then click on Properties. You will see a Target field in the newly opened window, with the path to your DOSBox.exe and nothing else. Replace everything in that field with the original shortcut's target that you copied before. 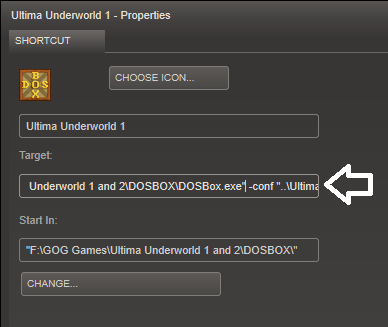 After this your game should run normally when launched by Steam.

Not the answer you're looking for? Browse other questions tagged steam dosbox gog or ask your own question.

11
Unable to Add Non-Steam Game to Library
24
How do I add start menu items to a Steam game after the installation?
1
Is there an aggregating service for online content distribution systems?
9
Is there any way to turn a DOS game that runs in DOSBOX into an .EXE file that will run effortlessly?
4
Is there a way to stop Steam from going offline without me explicitly telling it to do so?
13
Steam family share resets itself randomly
1
Is it possible to run GOG Galaxy inside Steam via steam-store application?