How should one weigh Critical Hit Damage when selecting equipment?

What this question basically comes down to is how should I weigh importance of critical hit damage over other types of damage? For instance I found a new ring which gives my wizard more intelligence and thus the item display says roughly +1000 damage, however this ring does not have a bonus to critical hit damage, which my current ring (which I am considering replacing) does have.

If I want more damage what should I go with? Is the damage difference calculation portrayed accurate (i.e. does it factor in critical hit change and critical hit damage)?

Here's a screen shot of the two rings side-by-side. 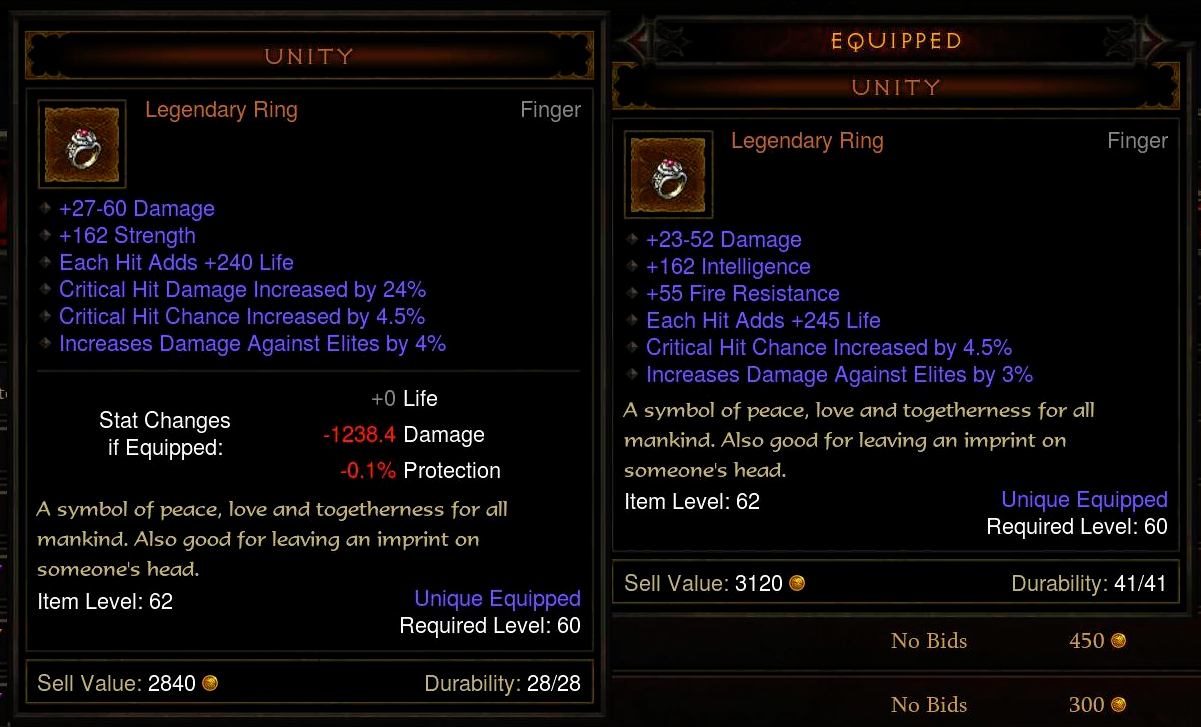 After seeing the 2 rings I would go for the Int one. 24% CHD is great but you cant get it on an other piece of equipement (e.g. the Amulet where you can easily get 80/90%+)

If your are playing casually and do not aim for perfect build, I advice you always go for the items that increase your DPS on your Character's sheet. If not it depends on several factors (for the Critical Hit Damage stat) :

To finish and complete my last point, in general CHD stat is really important in Diablo 3. It's part of the 4 factors that brings dps (CHD, CC, AS and +Damage). However gears that bring at least 3 of those stats + int/strength/dext/vit cost an arm and a leg. Hopefully with the next patch you'll be able to find those more easily.

First of all, the damage calculations shown are pretty much spot on, and incrementally choosing better items is going to make you tend towards an optimal item build because of that.

Generally, to get the best bang for your buck with Critical Hit Damage, you're going to want to weigh it against Critical Hit Chance. Pretty much every item you use will have your main stat, plus one of these two (or both if you're lucky), so this is the most important comparison to do.

Each 1% worth of Critical Hit Chance is worth about 10% Critical Hit Damage. If you're comparing two items, one with 3% chance to crit and the other with 30% increased critical hit damage, they're about equivalent. However, they are not both necessarily going to increase your damage by the same amount, because each item doesn't exist in a vacuum. You also have to consider what other items you're wearing.

32
Should I socket my weapon with a Ruby or Emerald?

4
How does critical damage work in Diablo 3?
10
How can I get the most out of Sweeping Wind?
1
How does extra damage or extra intelligence come into play?
3
What stats are best for casters (Wizard/Witch Doctor) doing Inferno?
11
What DPS is relevant for a Demonhunter?
4
How Does One Reduce Reflects-Damage Affix Damage?
3
How should one weight elemental damage compared to other damage stats?
4
Is phalanx damage affected by critical hit chance or damage?
4
How do people kill like crazy?
8
What gives 5% critical hit chance and 50% critical damage?