Can I disable multiplayer in Minecraft Pocket Edition?

Usually, one cannot go "online" in Minecraft pocket edition, unless you have downloaded the app that lets you connect to other servers worldwide (Multiplayer for Minecraft Pocket Edition). But, if you want to disable online play for your child, the option that is best for you is to turn off the wifi in the settings.

My son found instructions for getting Minecraft PE online through watching videos on YouTube Kids and was able to set it all up himself. He's cautious too, fortunately, so checked with me before connecting. Gave me a bit of a fright though!

I've already used the Settings on his iPad to deny him web access, so Safari doesn't even appear; however this doesn't prevent other apps using the Internet to do things other than display web pages, so online Minecraft is still possible.

Instead, I've locked things down on our wifi router. I've configured it so it always gives his iPad the same IP address. Having done that, I could also configure the router to block that device's internet access by port number. I wanted to allow iOS to continue to be able to do automatic app updates and have other App Store access, but prevent Minecraft (or other apps I may install in future) reaching the Internet.

Minecraft usually connects on port 19132, but there are plenty of servers that deliberately use others. Consulting https://support.apple.com/en-gb/HT202944 and https://en.m.wikipedia.org/wiki/List_of_TCP_and_UDP_port_numbers indicates that a blanket ban on any ports numbered 1024-65535 will prevent pretty much any custom internet activity without restricting the iPad's normal functions.

I tested it and Minecraft spins for a bit before giving a "server unavailable" error message - perfect!

I suppose it may be possible for a Minecraft server to be configured with a lower port number, but I couldn't find any so I'm confident he'd deduce "it just isn't working" long before stumbling on one (if any exist at all).

I've told him none of this, of course - instead I congratulated his resourcefulness and technical competence before having a recap on Internet safety rules. I think he took it to heart, but the router logs will let me know if not.

(Sorry I can't give specific instructions for configuring your router to do this: routers differ, but I'm sure you'll be able to figure it out. And I'm sure there's another Stack Exchange site to set you in the right direction, should you need some pointers. :) )

[Edit: This technique blocks Minecraft Pocket Edition and probably a bunch of other apps too, but it certainly does not prevent all apps accessing the internet. I'm an app developer myself and I've made plenty that only ever use the standard web ports of 80 and 443 - there are doubtless dozens of web chat apps that do the same. Make sure your kids can't install apps without your knowledge. Know what apps they have and how they work. Test any that could possibly allow communication with strangers. Educate your children.]

You don't need to worry so much about this. As long as your child is not connected to any WiFi networks that other minecraft players are using to play, then he can't connect to any servers anyways.

Your best option is to actually put the device on airplane mode/turn off the wifi. Its how i stopped my son from buying all sorts of stuff on the appstore.

This will stop them being able to play online and then you just tell them to ask you for use of the internet. 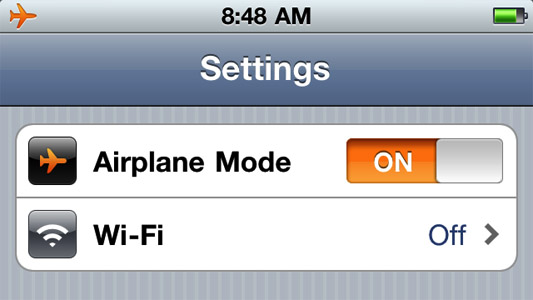 All ya got to do is to turn the WiFi off.
It's that easy. Look it up on YouTube.
Instead of ruining your child's life by "deleting the app". Just do it.