It was possible at one time (I believe it has been patched) to shoot through a tiny crack in Blu spawn on pl_upward during setup (see images).

Are there still ways on other maps to get kills (either as Red or Blu) during setup? 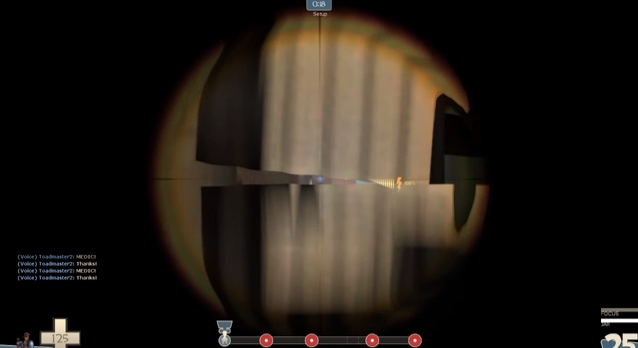 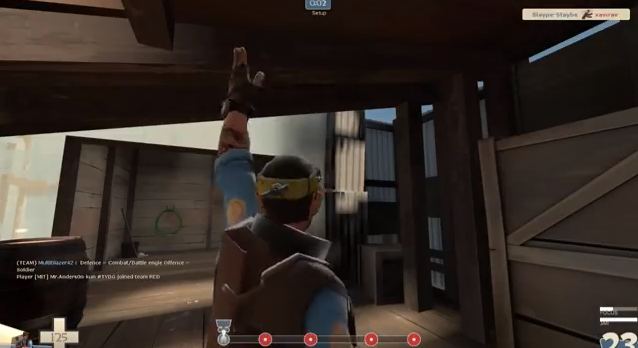 The only one I know of is to be a pyro:

Using any of the Flamethrowers and firing in a downwards position will sometimes cause flame particles to go through thin walls, such as setup gates, and set players on the other side on fire.

Aside from a few exploits involving flamethrowers and some Scout projectiles against setup gates, there is one map that does not really try to stop kills during setup: cp_well. Unlike other 5-point symmetrical maps, Well has 30 seconds of setup time where the building that contains the middle point is locked. This doesn't stop anyone from jumping over the train cars on either side of the building and bombing enemies, which with a decent rollout gets the fighting started 10-15 seconds before the gates open. You can even shoot bullets through the gap between the train cars and the building wall for surprise snipes.

Killing someone as a Scout during setup time on cp_well earns the Quick Hook achievement, whether you used a jump-boositng item to hop to the enemy's side, picked off someone who jumped to your side, or shot someone through the gap.

There is another glitch on Upward that (as of two days ago) has not been patched. If a RED Demo runs to the C shed he can spam grenades or stickies into BLU spawn (the left most part of spawn). This glitch is the last one shown in this video.

In certain maps like Dustbowl (I forgot which stage, but I think it is the last), a soldier with the rocket jumper and a pickaxe can kamikaze taunt against the wall directly in front of blu spawn in order to blow up anybody standing in range (6ft I think).

Just the other day on thunder mountain i saw a soldier kill some of my team mates with the kamikaze taunt before the round started, so that still works I think.

20
How do I execute well-timed taunt kills?
7
What are the typical nest placements of Yukon?
4
Where can I find TF2 Servers that play Freight or Fastlane?
9
How to capture the last point in Junction?
7
How does the Strange PDA track “kills”?
8
How exactly does the “Strange Part: Domination Kills” count?
2
Is it possible to completely disable voice chat in-server?
4
How can I make non-Strange weapons count kills?
18
What to do during setup as the offensive team?
5
How can other players view my individual Kills & Deaths?