What the the odds of the various slot machines in the Game Corner? Which machines have the best odds?

In both the original Red/Blue/Green/Yellow versions, as well as the remade FireRed/LeafGreen versions, an NPC tells to the player that she thinks the slot machines in the Celadon City Game Corner have varying odds.

Do different machines really have different odds? What are the specifics of these odds? Are the odds set or randomly arranged? How can this fact be exploited?

As far as I'm aware, there's no hard absolute data for this (at least, not for gen 1 and gen 3). That said, there have been some people trying to figure things out and the following is generally accepted as "true" by many players:

All the slot machines have their odds randomly generated each play. As such, there is no single slot machine that is good for every player all the time.

For Ruby/Sapphire/Emerald, the slots are again fairly random. You may be able to play a slot a couple of times, and if it pays out both times, it might be "hot" and worth continuing on.

For Fire Red/Leaf Green there has been speculation that the machine on the far left, directly below the woman in that aisle has slightly better odds. There isn't any absolute proof of this fact though and may simply be confirmation bias (you think it's better odds, so it feels like it is because you notice your wins more). FR/LG also have an interesting aspect to its algorithm: when the slots start spinning, the game has already decided the % chance of a win/loss. That said, it's not until the last slot stops that the game chooses what the payout will be. This means that if you have an emulator with save-states, if you save after starting to spin but before stopping any of the slots, and then repeatedly load that save, you will likely see either consecutive wins, though of varying amounts, or consecutive losses.

All I know is, that the game is so designed that sometimes it isn't possible to get three 7 to line up. The game will either stop at the picture right before the 7 (if you've pressed early enough) or pass the 7 and stop at one of the pictures behind. I know this for sure because of trying out in an emulator where you can let the game run frame by frame. So if the game has decided that you can't win, you simply can't win.

From the original series, I do not remember which slot machine had better odds. But I remember trying all and keeping their data. I did come to a conclusion that a few of them paid up much more frequently.

The odds are set in a single game. Meaning when you found the best slot, you can abuse it. It is unlikely but possible that the odds are randomly generated and another machine is more profitable in another players game.

They have no varying odds. All of the slot machines have the same division of pictures. And they rotate at the same speed.

When i played FireRed i was so pro that i new the distance beween the 7 so exactly that i win everytime.

On this site Celadon Game Corner they say the far left ones are the best, but they have no citation.

I didnt notice any better odds at a speciffic slot machine, because of the reasons mentioned above.

I needed 2 min to get back in my performence: 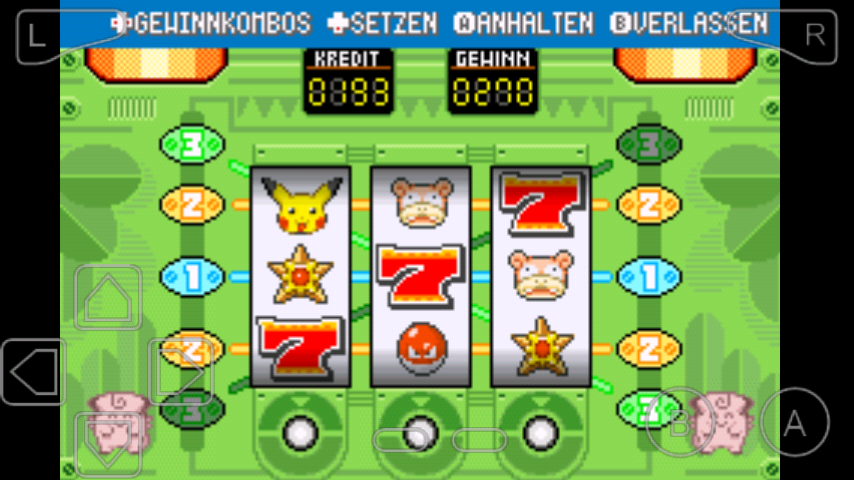 (This was a slot machine on the far right side)

Not the answer you're looking for? Browse other questions tagged pokemon-first-generation pokemon-third-generation .