I've been itching to play some flight simulator X recently, so I pulled out my DVD copy and threw that sucker in. However, I purchased that game back in the XP/Vista days, now I'm on Windows 8.1 and I cannot install the game.

When I try to install the game by launching DVDCheck.exe, the InstallShield wizard starts up, hangs on "preparing installation" then crashes. After two windows error reporting dialogs, the wizard shows this error message: 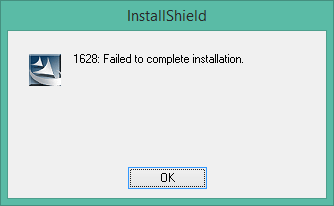 I've read a bunch of similar questions online for the same error code I get when I install, and all of the solutions don't seem to have an effect. These are the troubleshooting steps I've tried:

But still no luck. Microsoft reports that FSX is compatible with Windows 8.1 on their compatibility website, but I can't seem to get it to install.

I decided to just bite the bullet and bought a new copy.

It worked. If you're having the same issue I am having, I apologize but there really wasn't a solution to my problem other than my installation media was faulty.

Step 1: Got to the settings app in windows 8.1 and create a new account

Step 2: Log onto the new account and insert the first disk for FSX open the disk in the windows file manager and find the installer application

Step 3: right click on the application and run as an administrator

Step 4: FSX should now start to install, follow the on-screen instructions , it took around an hour for my install to complete but it may take longer on other computers

I hope this helps those having similar problems

if it still does not install make sure any installwizard folders are deleted from the common files folder in program files and that no installwizard processes are running. Once you have done this try the installation again.

If you need further information please leave a comment

If "compatibility" means "does FSX work in Windows," I can say that yes, it is compatible.

However, according to my tests on more than 35 different PCs, all of them have experienced a reduction in frame rate. The amount of reduction was almost 9 to 12 frames per second!