Getting to Gilly and back

Been trying to get to Gilly (in career mode) to get more science but I can't seem to ever have enough fuel to get back. I don't know if it's because I have too much weight or not enough fuel but no matter the ratio I always run out of fuel.

My lander consists of:

These are connected to an FL-T400 tank which fuels a nuclear engine. And from this tank there are 3 other tanks the same size with LV-909 Liquid Fuel Engines under.

Since these are low thrust, I push them out of kerbin orbit with a large Rockomax X200-32 Fuel Tank and a Poodle engine.

And yet, it seems like the poodle is too weak to get anywhere so I end up using the 3 small engines and deplete that fuel so by the time I get to Gilly I'm full out of fuel.

What's a more efficient way to get to Gilly? I really just need the goo canisters, the observe bay, and the landers to get surface samples. Any and all suggestions welcome.

You're right, that setup wont get you to Gilly and back, for a variety of reasons.

Here are four ways you can improve your game and make for yourself a rocket that will perform that mission. I'm assuming, since you're playing KSP in the first place, that you want the achievement of having made and flown the entire thing, not just downloaded someone's .craft file!

* Caterpillar Staging is when you have engines that aren't jettisoned with the fuel tanks, as pictured below. (The parts with the diagonal lines are meant to represent the 2m Rockomax decouplers.) Just like Asparagus Staging, Caterpillar Staging is meant to drop the dry weight of empty tanks and therefore keep the rest of the craft light and long range. 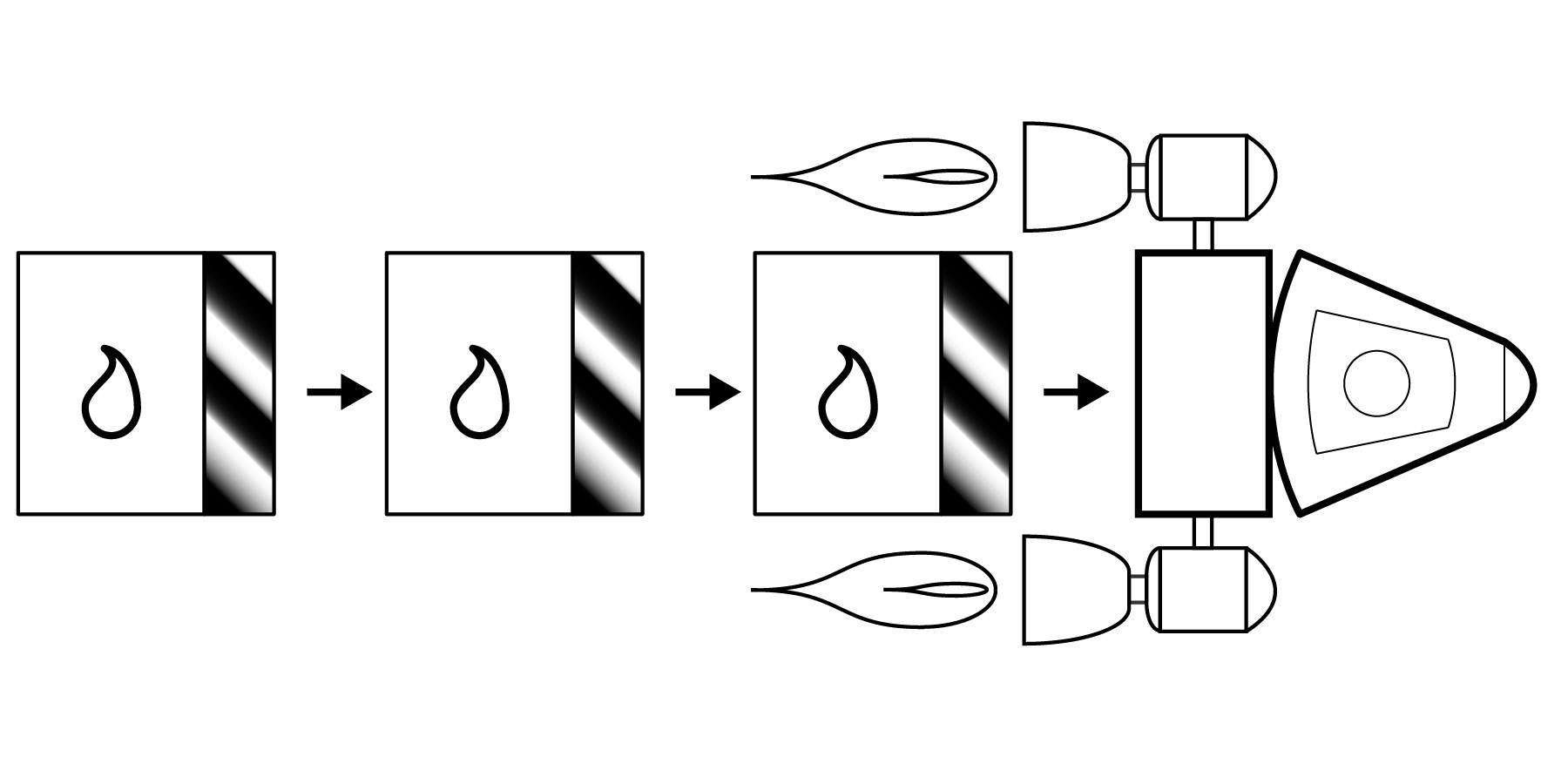 When you perform an interplanetary voyage, it saves you a lot of fuel when you wait for the planets to be aligned in a way that you can reach your destination with a simple hohmann transfer. In the case of Kerbin->Eve, that would be when Eve is about 54° behind Kerbin (there is a handy online alignment calculator for KSP).

When you enter the Eve planetary system, you should first get into an Eve parking orbit. You can do so with minimal fuel when you adjust your course early so you get into Eve's atmosphere at a height of 72km. That way you can perform an aerobrake maneuver and get into an eve orbit with minimal fuel expense. Aerobrake at Eve is now much harder - you would surely burn in atmosphere, unless you will bring heat shield - but then you don't need it on Gilly.

Then you just need to perform a normal Hohmann transfer from Eve to Gilly, like you would from Kerbin to Mun (although you need to aim a lot better because Gilly and its gravitational sphere of influence is tiny). Because Gilly has such a low gravity, landing on Gilly is rather trivial (It does in fact require so few energy that a Kerbonaut on EVA can get from a Gilly orbit to the surface and back to the ship using just his jetpack. But this stunt is rather tricky to pull off, so you should rather land with the capsule).

When you got your science and would like to get back, it is a lot more effective to return to a low Eve orbit and start from there than starting directly from Gilly. This is because of the Oberth effect: expending fuel near a large gravity well is more efficient than in a high orbit around it. Again, you should have some patience and wait until the planetary alignment is correct (we return to our handy calculator and find out that this is when Eve is 36° behind Kerbin).

By the way: As you might have noticed, a mission to Gilly is a mission to Eve orbit plus a field-trip to Gilly. That means you should try to combine it with some exploration of Eve. Returning from the surface of Eve is by far the most challenging thing you can do in KSP. When you want science points, there are many more lower-hanging fruits for you to pick up. But just landing on Eve when you don't intend to get back is quite simple. A simple probe-lander to Eve surface just needs a probe-core, a parachute, a heat shield, an antenna, a few batteries and solar cells and the scientific instruments. With just about 1/2 ton of additional payload you can get surprisingly valuable instrument results from Eves upper atmosphere, lower atmosphere and surface.

When you have no scruple to sacrifice a Kerbal for science, you could expend about one ton and use a manned no-return Eve lander for crew reports, EVA report and a surface sample (you monster).

13
How do I bring back lost Kerbals?
7
Does fuel feeding make sense?
8
How do I get back from Eve?
6
What causes Kerbals to become brain dead debris?
4
What's the air intake parts air drag in KSP past 1.0?
4
Why are parachutes so useless?
2
Trouble moving parts in space
6
How to control a rocket?
2
Can't send science back to Kerbin