My question is how can I calculate the C constant? I am ready to count/parse events in game.

If you know about Markov chains you can basically solve the P(E) for any C value. You need to think about a bunch of states {1,2,3...}, which correspond to how many "stacks" of C you've accumulated.

So you have a matrix P where the nth row and kth column holds the probability that you go from n stacks to k stacks. However, the only valid transitions are:

The matrix is of finite size because once you reach n = ⌈1/C⌉ (rounded up) stacks, the probability of going back to 1 stack is 100%.

Now with your A matrix constructed, you can compute what is known as a stationary distribution, where aX = a, where a is a vector and X is a matrix. If you have Matlab you can solve for a by taking the eigenvector of the eigenvalue 1. This eigenvector represents the proportion of time spent in each state, so by dividing it by the sum of all the values, you obtain a long term proportion of time spent in each state.

Once you know the probability of being in each state you can multiply it by the probability of a proc in that state and sum it across states to get the average proc rate. Then you just try different C values until you achieve desired P(E).

Below is some Matlab code I put together, the values are not exactly the same as the wiki page by they are sufficiently similar that I have not put more thought into it.

EDIT (response to comment below): I'm sorry but I don't quite understand what you mean by "testing values". This process rests on the assumption that the pseudo-random probability satisfies p = n × C. The assumption is that the Warcraft 3 developers wrongly calculated the C values which lead to a inconsistency between expected (in the tooltip) and observed. So the true values can either be found by taking the observed (through parsing) probability to calculate the corresponding C value using my algorithm or you could somehow acquire the table used for C values in the source code, which is from where I assume the wiki got them from.

The other solution would to be parse in a way that discriminates between the number of misses experienced, for example you can calculate the frequency of procs after 2,3,4 non-procs then fit a straight line across the points to determine the linear growth of the C value. This method is probably the most cumbersome but provides some good granularity and also gives some indictation as to whether or not the probability is indeed p = n × C (ignoring the point where n × C goes above 1, the values should pretty much sit in a straight line).

Maybe this thread will help you. A "numerical" approach is mentioned but unfortunately I cannot find the source of it. If you want to get the actual values of C you have to test them for various %-based skills. Maybe all the percentages are not represented so you might have to infer the other values for C, but it's actually pointless if there are no skills/items corresponding.

For example, if you want to have the actual C for P(E)=15%, you take Coup de Grâce, PA's ultimate and you measure the number of time you crit right after a crit divided by the number of attacks you made after a crit. You should find a value close to 3.22% like stated in the wiki. In the playdota thread it is mentioned they have done a million attacks.

I'm not sure whether the "theoretical C" is relevant here if you are able to do some testing you should find the actual C and that is the only one that matters.

user72955's iterative approach is fundamentally along the right lines, but you could run into problems if you ported that Matlab code to other systems with different floating point precision, or if you wanted the numbers calculated to the limits of precision of your programming environment.

In general, when you are testing for convergence on a system where floating point numbers are inexactly represent by binary formats, you will not want to make the comparison between expected and actual with an arbitrary error value as in that code where it tests abs(target-prob)>10^-8. Testing this way is prone to getting caught in an infinite loop if the iteration converges to a value that is not as accurate as your are guessing it will be. In the code I give below, I test the outputs of consecutive iterations for convergence to 0 as my terminating condition, rather than latest output vs expect value, to avoid this issue. Because the calculation of P from C is deterministic, and precision the number format is finite, it will always converge to a point where consecutive outputs are identical and as close as possible to the expected value, without the possibility of getting caught in a cycle or failing to converge due to binary representation inaccuracies.

The second issue I have with that solution is the incrementing of C by adding an arbitrary percentage of the output error. This is not a linear gain system where additive negative feedback will quickly and accurately converge, as the poster realized when they had to put in the divide-by-8 fudge factor for smaller increments for low values of C. If more precision were asked for, more fudge factors would be needed to keep the system convergent. It's better not to make assumptions about the relation of the output to the input, and adjust your input by an interval halving approach.

Here is a solution in C# code that will converge to the limit of the precision of the decimal format type. The 'm' after numbers just tells the compiler they are decimal format literals, as opposed to floats or doubles.

CfromP() is the main function you call, and PfromC is a helper function that forward computes P (the easy direction to go).

This isn't adding any new thought to this discussion, but here's the above C# code translated to Python. I also added a function to test a value of C against many iterations with random rolls, and the variance between runs easily supports the theoretical value for C.

The above code gives the following values for p, theoretical C, and experimental p:

The event of interest is an attack proc (a critical hit, a bash, etc) that has a certain probability of occurring for every attempt. The pseudo-random probability c is a downward adjusted probability to the fixed probability p, i.e. c < p.

I have a probability of c to proc on my first attempt. If I do not proc, and this happens with probability 1-c, then the probability of me proc-ing on my second attempt will increase by c to 2c. Eventually, nc >= 1, and the integer n is the maximum number of attempts made for a proc to register. I will be guaranteed to register a proc after n attempts, i.e. nc=1.

Let X be the random variable that represents the number of attempts before a proc is registered for a pseudo-random probability, c. The probability mass function of X is given as follows:

where the maximum number of attempts n = ⌈1/C⌉.

The expected value E(X) gives the average number of attempts made before proc-ing.

Equate E(X) with 1/p, to get the equality

The LHS of the equality is a polynomial of degree n-1.

Given a pseudo-random probability c, we can find its counter part p by taking the reciprocal of the polynomial evaluated at c. Unfortunately, I do not know the closed-form solution of p in terms of c. If p is given, then I suggest using a numerical solver to obtain c. 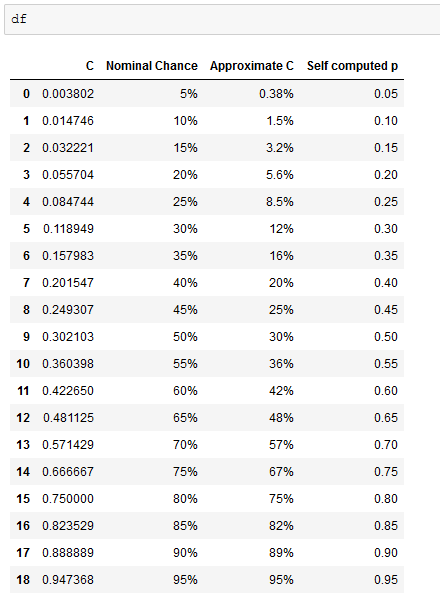 Unfortunately sololearn gives a timeout if I try to debug a lot of values, so I left it with a range of values that can fit.

As stated before, floating points are tricky, so that's the reason to use double instead of float. The precision given on double is better than the one that can be achieved with float.

One interesting point to notice is the condition to break the loop which is having the exact same value for p1 and p2. For this scenario the code for all the values I've tested so far loops between 50 and 60 times (just on the main loop). I didn't count the amount of times the secondary for used on PfromC was run.

One way to optimize is to truncate the subtraction between p1 and p2 by doing this at line 55:

To simplify I've created a function to do so in the code and left there an example.

Anyway, its interesting to see how the number converges to the expected value.

4
How often will an opponent be bashed?

9
What are the differences between Defense of the Ancients (DotA) and DOTA 2?
1
Do DotA 2 heroes have the same "fun" names as in WC3 DotA?
5
Where can I find the default controls for Dota 2?
2
Why is the Team button on Dota 2 unclickable?
2
Where is the item folder located for Dota 2?
6
Dota 2 Upgrading Items using the Courier
3
Is the DotA Mod receiving the same patches as DotA 2?
0
Dota 2 The International 6 Battle Pass / Compendium Expiration