What is a safe high elo counter to Leona if Thresh and Lulu are banned?

I recently had to play against a Leona when both Lulu and Thresh were banned. I personally really like Thresh against Leona since you can harass with autoattacks and deny her hard if she goes in (same goes for Lulu support). However, Thresh has been a popular ban ever since he was released and Lulu also sees more bans since her recent popularity as a midlaner.

In that match, I took Janna because it was the first champion that came to my mind that can deny Leona and also prevent the ADC from dying instantly. We won the game but unfortunately we lost the lane extremely hard (and I can't always rely on my midlaner carrying).

What would be a good high elo counter to Leona if both Thresh & Lulu are banned? I don't find that Morgana would be a great choice since her shield is on a high cooldown and she is really team dependent.

I agree that Morgana counter for Leona in lane is not great for higher elo (See Xpecial v Kreppo in this game as example). As you stated her shields are to long of a cooldown and Leona can just q the non shielded person after zenith blade.

Looking at the raw game data is useful if you already have a good understanding of lane match ups, but that doesn't provide any insight on why certain supports are good vs Leona. It also doesn't encourage innovation in lane because everyone always plays what everyone else plays. The best approach is to know why Leona(or any champion) is weak in lane/game and find champions or gameplay that exploits that weakness.

Here are some alternative champions if Thresh and Lulu are banned.

Another great alternative to a Leona opponent is just avoid her. Leona becomes pretty useless in 2v1 situations. They can either rotate to counter costing them farm, or deal with it. This requires a bit of teamwork (solo q its hard to make this work), but a lane swap is a great counter to a Leona lane.

I may add more later if I think of any other fun, uncommon supports.

The most reliable way to determine counter-picks is to look at recent match statistics. There are a number of websites out there that are very good at doing this analysis for us. In the example below source material has been provided by lolcounter.com

According to win loss rates at the time of this posting, Morgana would be your best pick if you are up against Leona and facing a Thresh/Lulu ban. 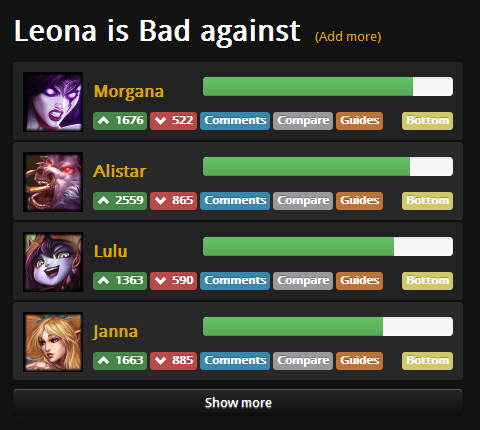 It is important to note that lane Synergy is arguably as important as lane matchup. If your support champion has better synergy, you might want to consider him/her, even if the win rate isn't as good. 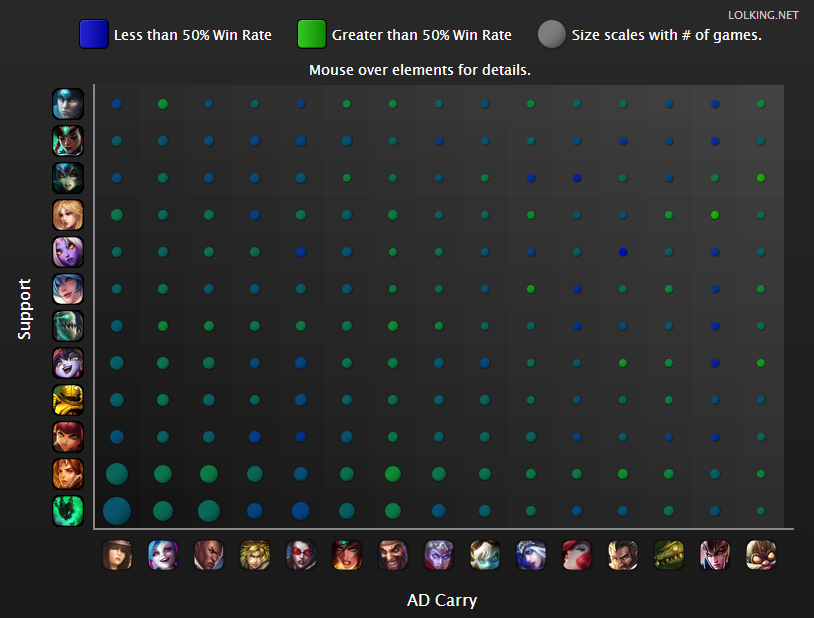 2
What role can Malzahar take in high ELO games?
5
How do I counter support Zyra?
14
How to pick the best support for your ADC?
4
How to effectively play against an Annie support?
4
Why not ADC Nami?
5
Why do ADCs always go for damage over armor?
1
Sejuani vs Leona Support
1
As a jungle how do i pick/play against a tank comp?