moving minecart once hopper has items, and then becomes empty

Here's a rough outline of what I want

Hopper gets x items in it, the cart stays still

Is something like this currently possible? I have it at the moment that the cart always moves, except when the hopper has items, which works, but when the cart is empty the noise annoys me and the other people in the area.

I tried putting a detector rail underneath the hopper so I could tell when the cart is there, but that then powers the hopper so its items don't drop into the cart.

Since you mention in a comment that you are basically building off of my previous design, but adding an automatic option to send the minecart instead of pressing a button, I'll show you how to modify it accordingly: 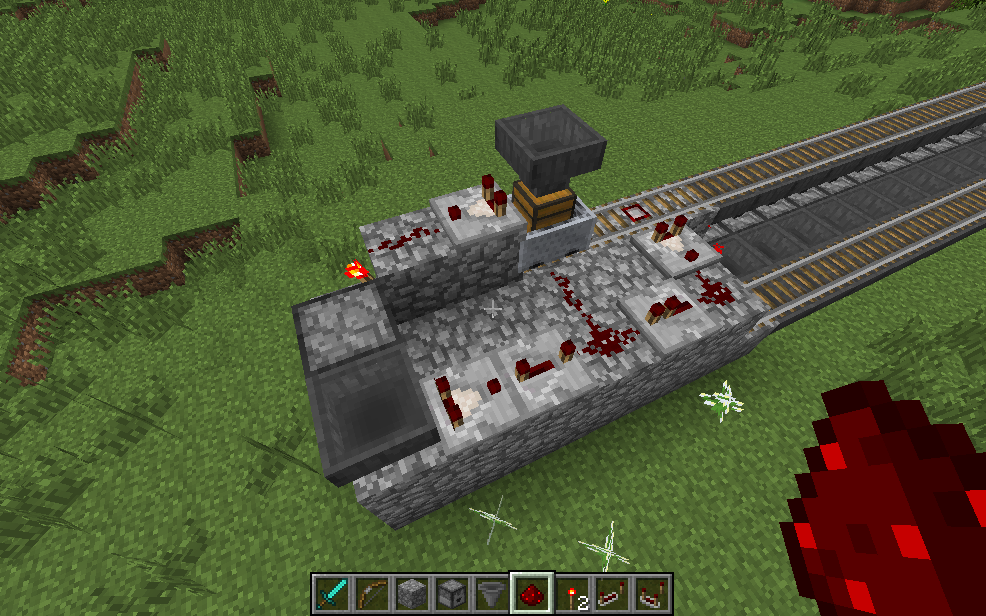 After adding a hopper above the cart, add a comparator which powers a redstone torch. This will turn on when the hopper empties. This signal then powers a rising edge detector circuit that consists of a dropper feeding another hopper, which in turn feeds back into the dropper. Place a single item in the dropper. A comparator tests the contents of the hopper, and a repeater feeds the signal into the powered rail. Whenever the feeding hopper empties, the rail powers and sends the cart along.

So the biggest problem comes from the fact that in order to get a Comparator signal from a Storage or Hopper Minecart, the Minecart needs to be resting on detector rail.* 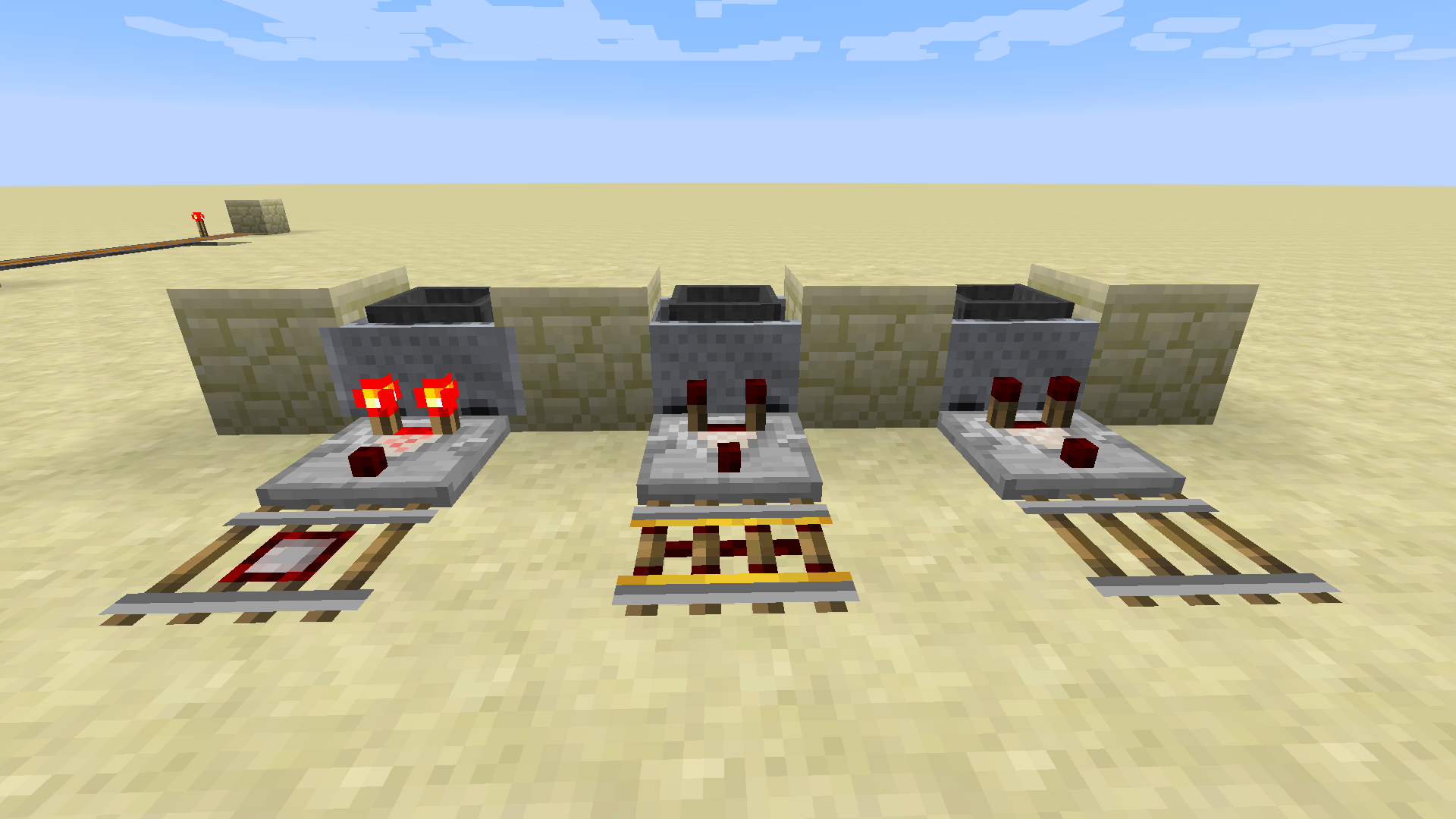 Obviously this is a problem, since you can't cause the Minecart to move using detector rail. For this you need a block swapper. The traditional ultra simple design doesn't seem to work anymore, so instead, you need to use some control circuitry. Luckily, I found a design on YouTube purpose built for block swappers:

You'll be swapping detector rail and powered rail in a horizontal fashion, like so: 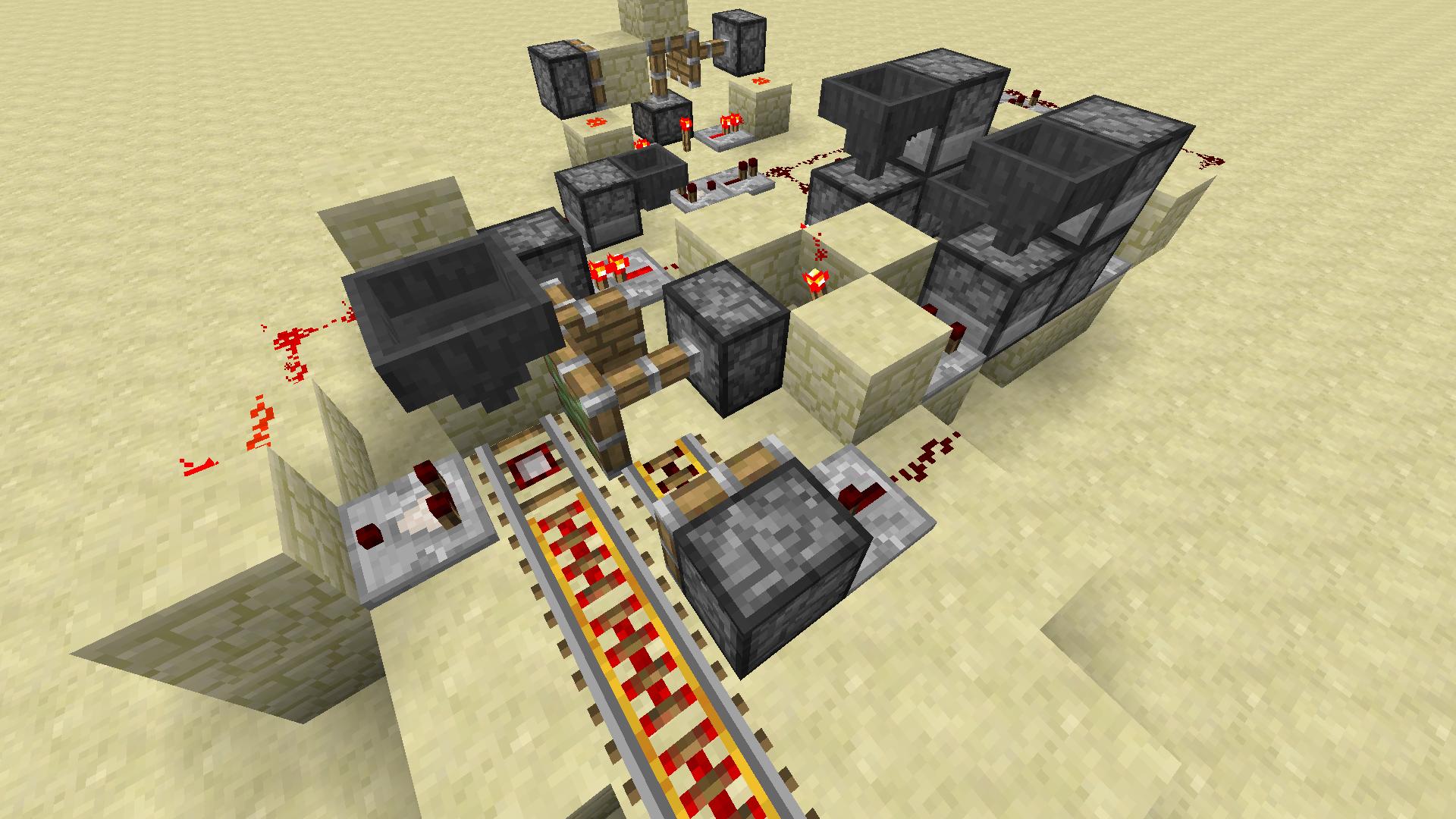 Notice the redstone torch behind the centre piston. It isn't obvious from the video that it's required.

Next we need to work out the wiring to trigger the block swapper. I did this to your specs which were basically (in psuedocode)

This isn't really ideal, since the cart can be full even if there's items left in the hopper. You would need to add || cart.full() to the above if statement to make it more useable.

Now, there's one more thing. You don't want to keep the Minecart racing back and forth after you send it off. In order to accomplish this, you need to trigger the block swapper a second time to replace the detector rail after the Minecart leaves. I accomplished this with a delay circuit like so: 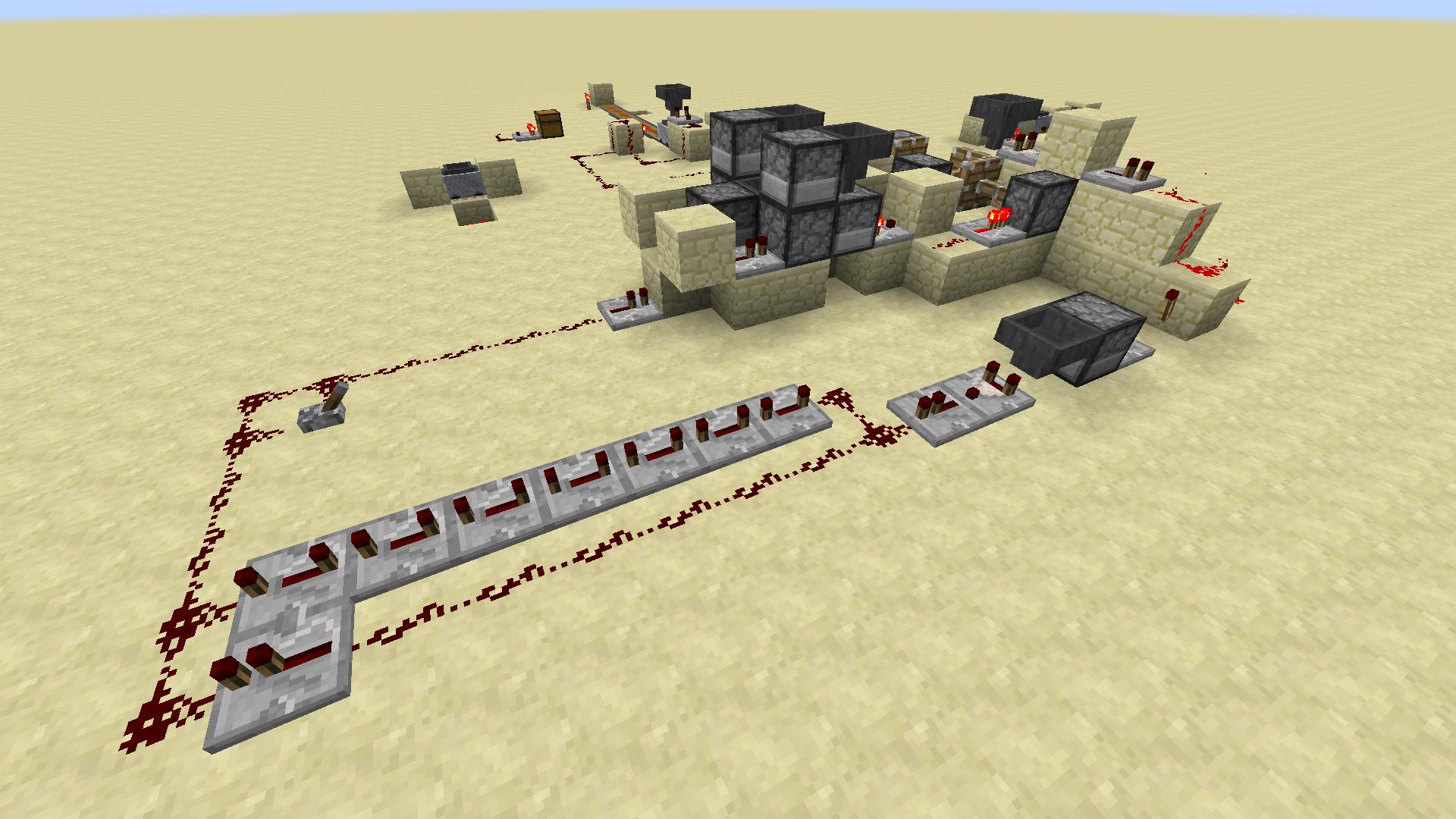 Finally, during my testing, I discovered that Storage Minecarts don't seem to work. They aren't being filled by the hopper, and I'm not sure why I'm guessing it's because there's a powered detector rail beneath it. Hopper Minecarts work just fine. Also, I've created an MCEdit schematic file that you can get here that contains the system shown in these images. It doesn't include the full cart detection logic either. Implementation of that is left to the reader.

*This was tested with the 1.8 snapshots. I don't know if this was always the behaviour, or was recently introduced.

Really it isn't that hard. All you need to do is something like this: 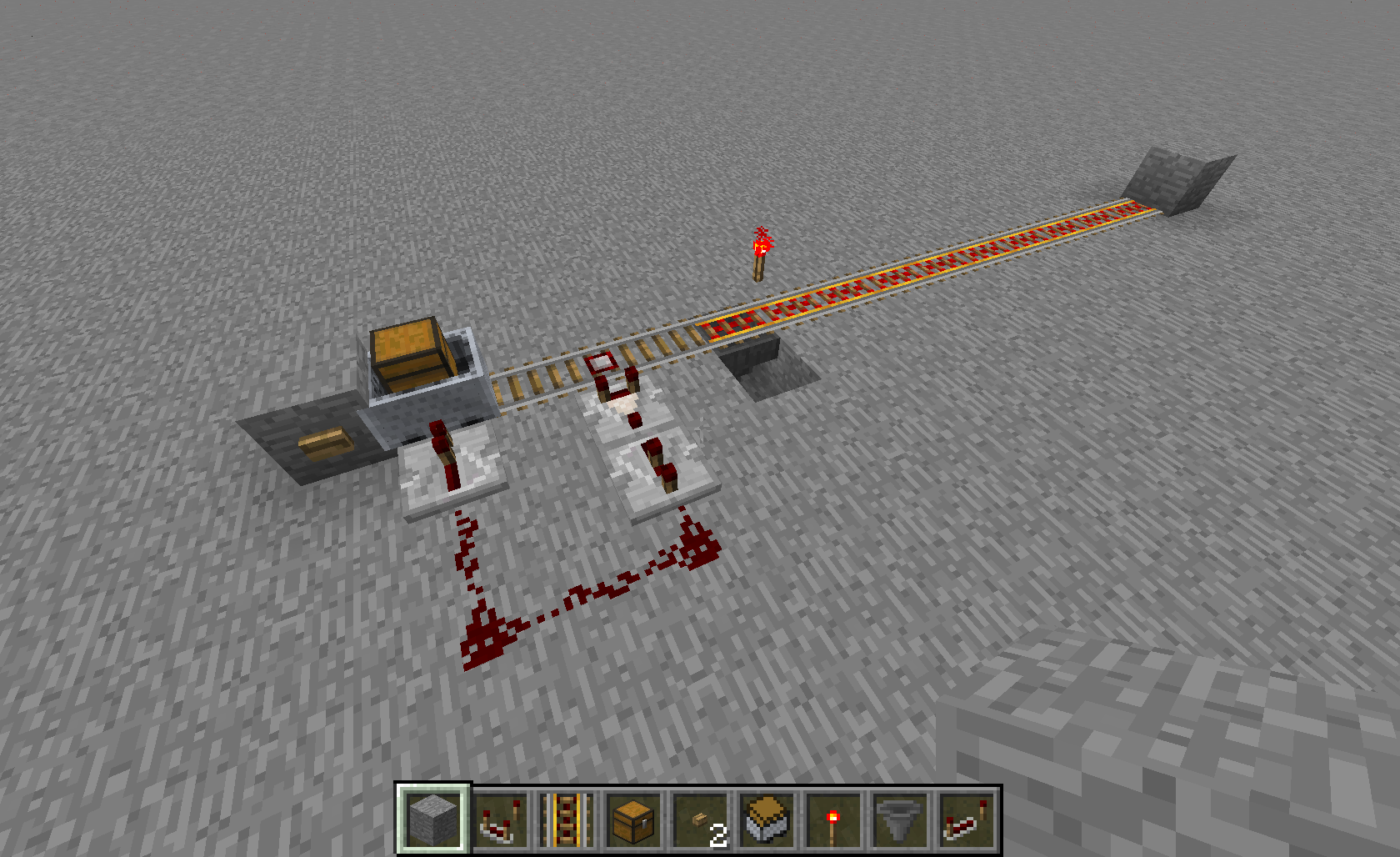 The initial signal to start the cart can come from a comparator connected to the inputting hopper. After that the cart will continue until it is empty. Total delay is 3 ticks. The last repeater is just to prevent the redstone from connecting to the button. Underneath the cart is a powered rail.

I know this is an old thread, but here is a compact-ish solution to op's problem which acts in the way he described. Only issue with this design is that if the minecart with hopper gets completely emptied the system wont work. This is not usually a problem since we just stop the minecart before it's completely emptied and one coud place some other item in the hopper that is not allowed out with some filter if it is needed. 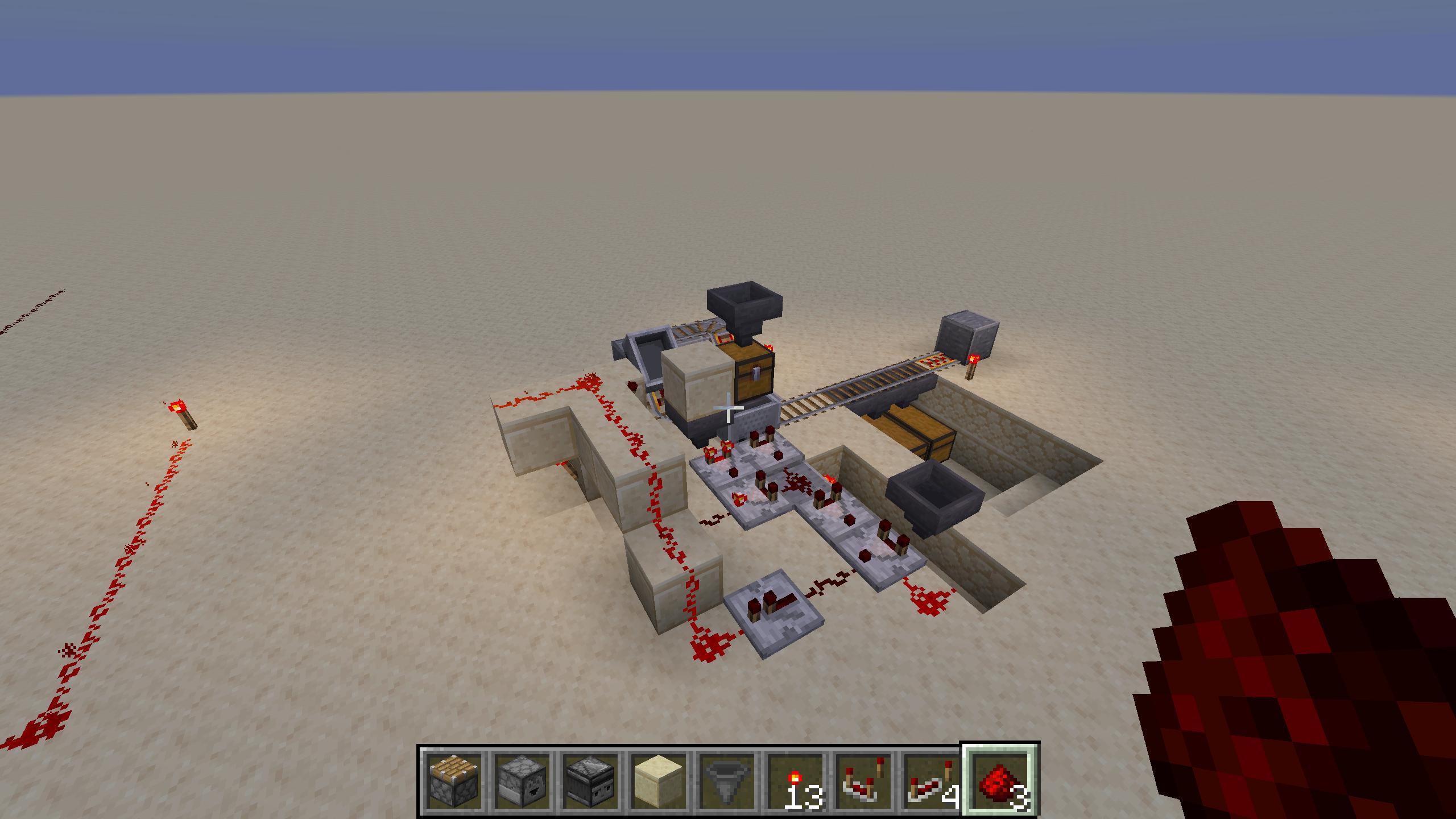 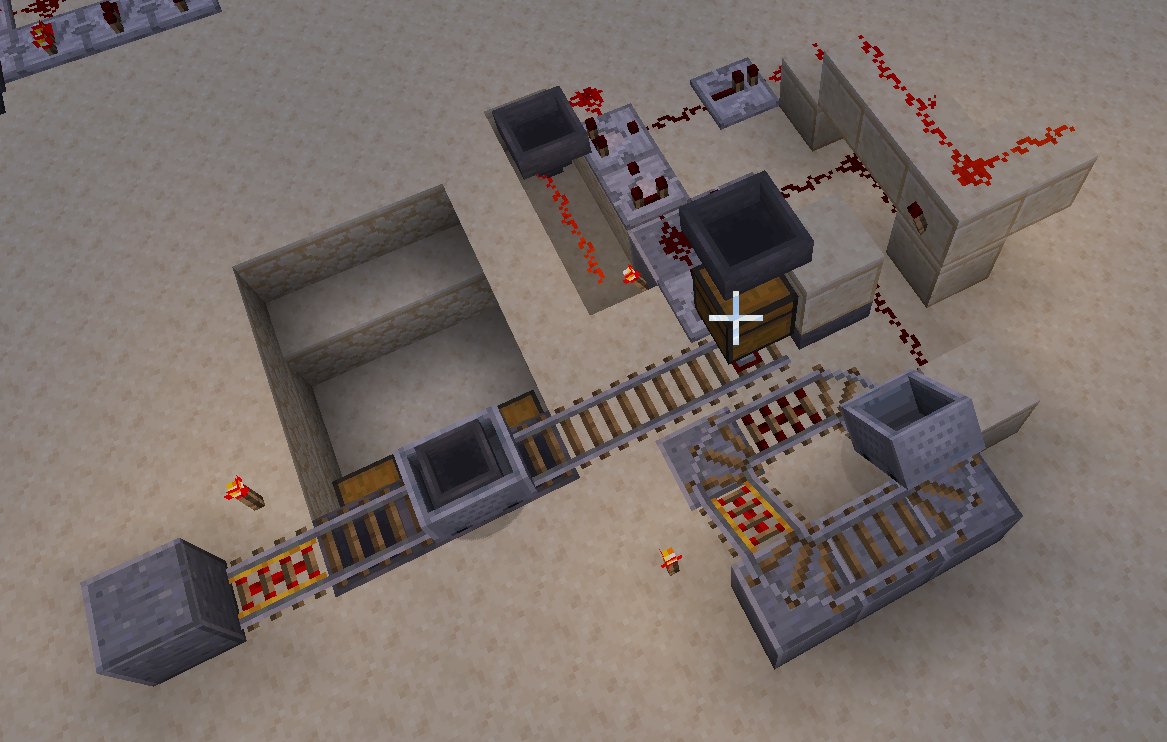 "Riffing" a little on the solution from gnovice (I play on Bedrock, but the principles in play are the same), I believe I have a workable solution to the full minecart piece. If the minecart is full, items will begin to back up into the feeding hopper. We can detect when it reaches 23+ items in the hopper with a comparator and activate the powered rail under the minecart at that time. This "tweak" to the design sends a signal across to the existing redstone "switches" when the signal output level from the hopper reaches 2 and keeps it on until it falls back under 2. This way, the powered rail remains active so the cart will continue bouncing back out to finish its circuit. 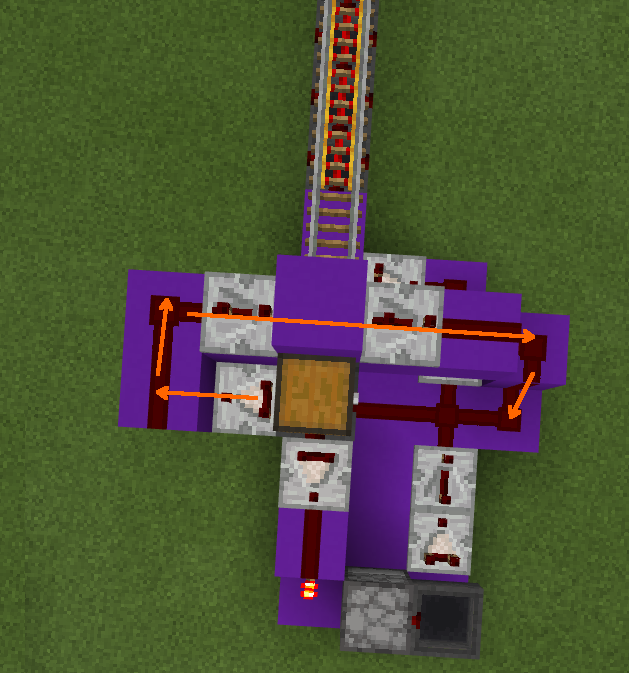 The fact that the storage was full to begin with means that it will also be activating the detector rail on each trip, so it will continue to draw down the quantity of items in the feeder hopper until it falls below 23. If the cart's storage manages to empty itself while it's out on its circuit, it should have plenty of room for whatever's in the hopper at that point, so it can finish the "normal" operation.

The only condition under which this design may fail, to my knowledge, is if there are enough items to completely fill the minecart's storage plus between 1 and 22 additional items. I don't consider myself a redstone expert in any way, so there are probably better ways to accomplish even this, but in my testing so far, it all seems to be working normally.

4
Automatic item recognition
5
Hopper Timer only exchanges one item?
3
How do I determine which hopper the user clicked in Minecraft with command blocks?
3
Please explain why this redstone minecart-loader works
0
How to prevent falling mobs stopping my collection minecart in its tracks?
1
Selective hopper minecart unloading
3
Synchronize two redstone pulse inputs