What are some tips for mastering redstone circuits? [duplicate]

Possible Duplicate:
How do redstone torches (circuits) work in Minecraft?

New to Minecraft, just got beta, mastered most of the mechanics (mining, picks, the Nether, etc.) and now my final project, (besides building some unbelievable thing) is mastering redstone circuits.

I only know basic stuff, and I can't exactly access the MinecraftWiki just yet. In the meantime, I'd at least like some help before i go off and screw everything up with these circuits. I'm still having trouble with the mechanics of metal doors, pressure plates, etc. Hard to get a lever to work on both sides of it.

Redstone circuits are based on two items, Redstone Dust and Redstone Torches. Both of these items are mined from Redstone Ore. When you mine Redstone Ore, it drops many pieces of Redstone Dust. To craft a Redstone Torch, you put a stick in the crafting window with one piece of redstone dust above it (like a regular torch but with Redstone instead of Coal).

When Redstone Dust is placed on a block, it becomes Redstone Wire.

It's important to note that doors can receive power from the blocks surrounding them. If you want to make something that opens the door momentarily when you hit a button, or open when you step on a pressure plate, you don't need any Redstone Dust - you can just place the button on the block next to it / pressure plate in front of it.

However, Redstone has its quirks. Power can only travel 15 blocks across Redstone Wire. If you have a long strip of Redstone Wire 20 blocks long and place a Redstone Torch at the beginning, it will reach the 15th block and the remaining pieces of wire will be unpowered. To circumvent this issue you can build repeaters, which are simply two NOT gates in sequence (switching the signal twice results in the same signal).

Also, Redstone can burn out. If you make a circuit that is designed to flash on and off too quickly, it will eventually stop working until you remove a part of it and wire it up again. Specifically, a device that flashes on and off every 1, 2, or 3 ticks (there are 20 ticks in a second) will burn out.

Here is an image with various logic gates taken from the Minecraft Wiki - the article there has more info on each gate. 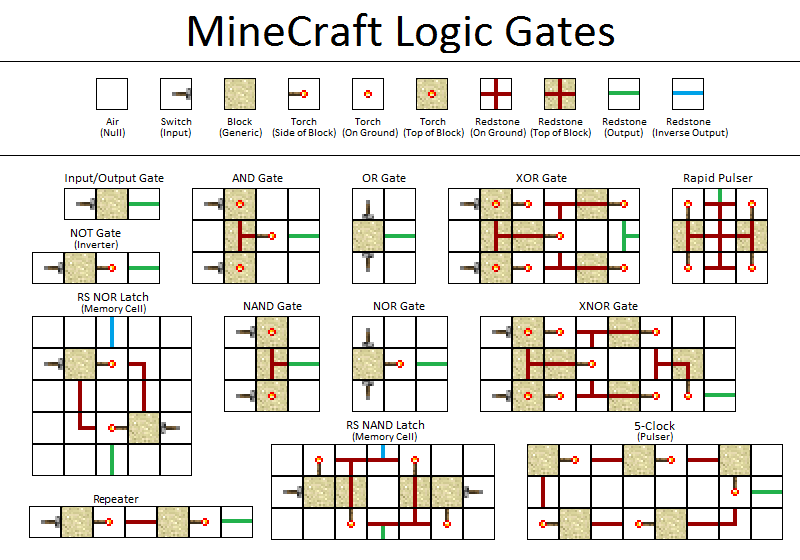 Redstone circuits are generally shown through schematics like this one:

These are three designs for an AND gate: output O is only on when inputs A and B are on.

Using a combination of these gates, you can make many things. For example, a Monostable Circuit. I picked this example because it uses an RS-NOR latch and relies on the burnout quirk. 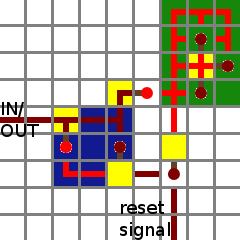 (image from the Minecraft Wiki)

When a button is pressed, it delivers a signal for a while and turns off. This Monostable Circuit will extend the amount of time a button press delivers a signal. The navy blue section of the circuit is an RS-NOR latch. The green section is a clock that will burn out after a while. When the button is pressed, the RS-NOR latch flips and activates the clock. When the clock burns out, the RS-NOR flips back. This makes a circuit that will extend a button press. 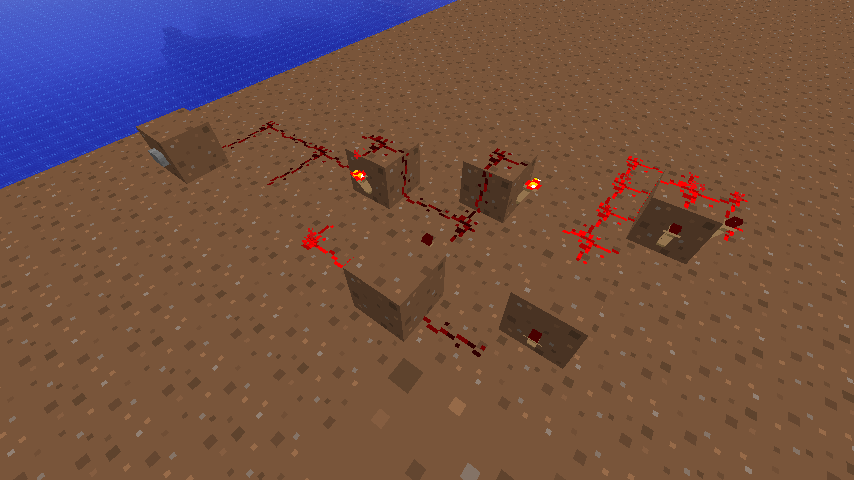 Now that many new Redstone items have been added, I felt it was time to revisit this answer. The first (and probably most important) item that was added was the Repeater (added in Beta 1.3)

The Redstone Repeater is a unique block, as it has 4 different settings. You can cycle through them by right-clicking. You will notice that each setting places the "Redstone Torches" farther apart. This is because at each individual setting, a Redstone signal will take longer to propagate through the item. The settings are 2 ticks, 4 ticks, 6 ticks, and 8 ticks (or 0.1, 0.2, 0.3, and 0.4 second delays).

The Repeater has also been called a diode, because it only lets a signal travel through it in one direction, much like an actual diode does. Repeaters will only accept an input directly into it. 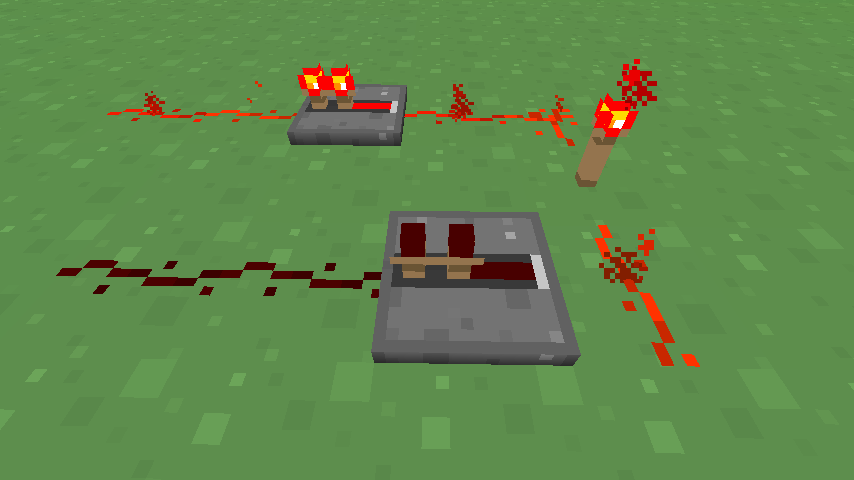 Another interesting property of Repeaters are that they can "power" a block if the block is placed right after the Repeater. 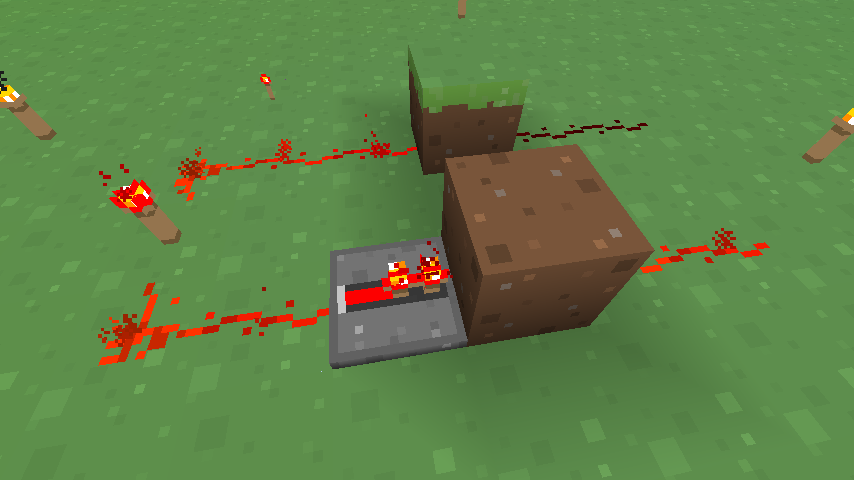 Some uses of Repeaters are compact (adjustable) clocks: 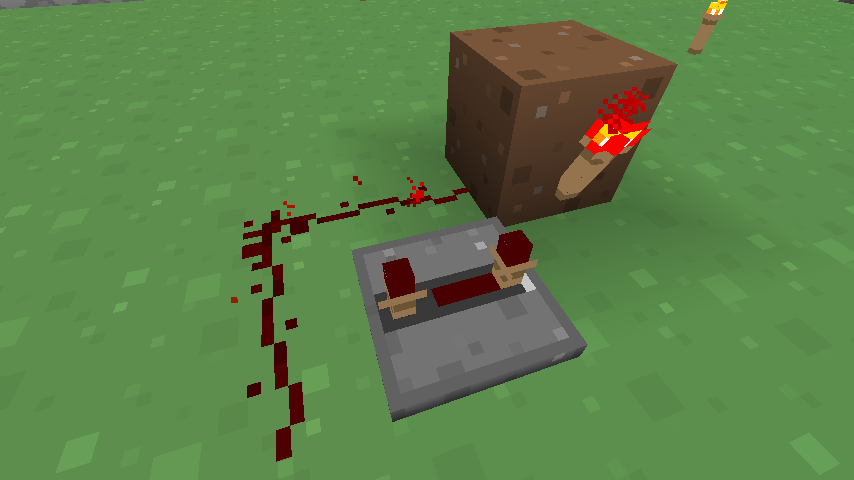 And having isolated parallel signals: 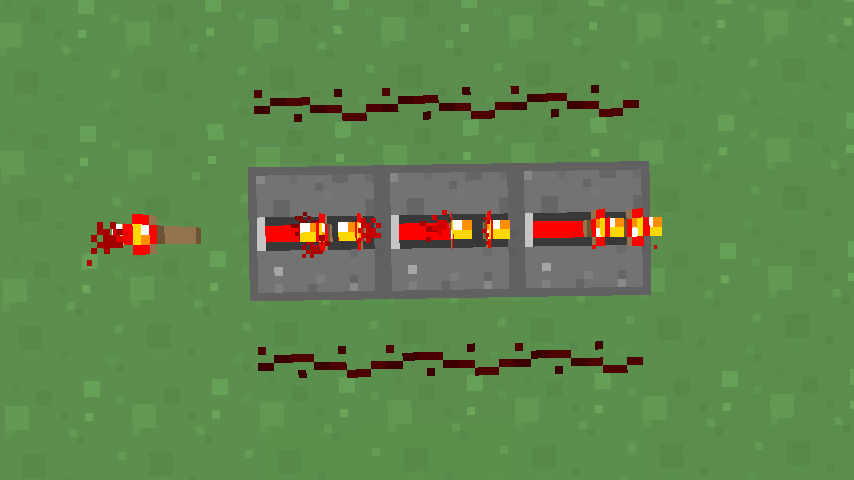 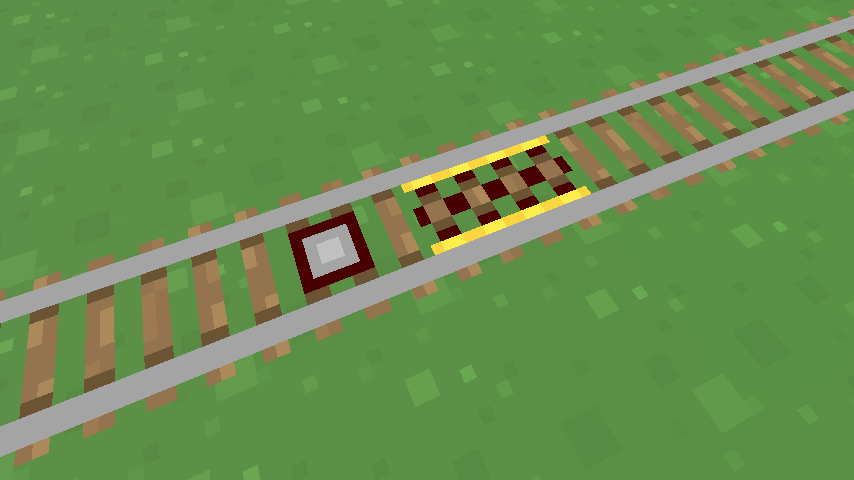 Detector Rails will simply give off power if a minecart is on them, and not if there is no minecart on them. 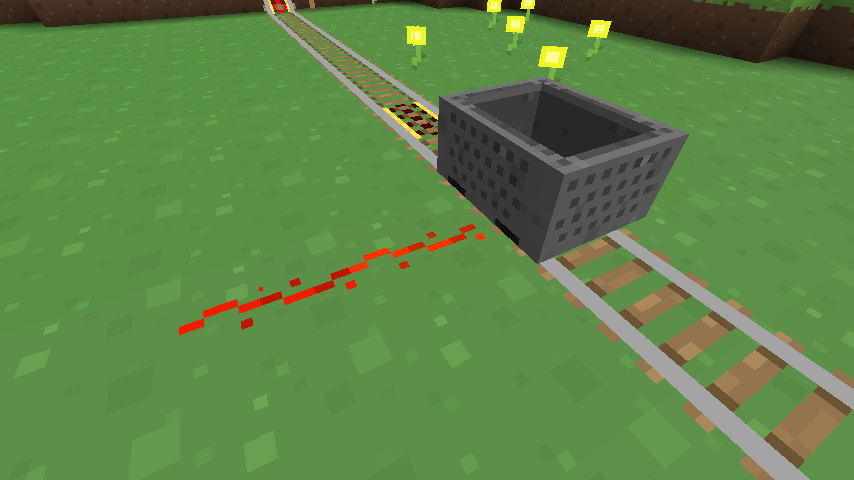 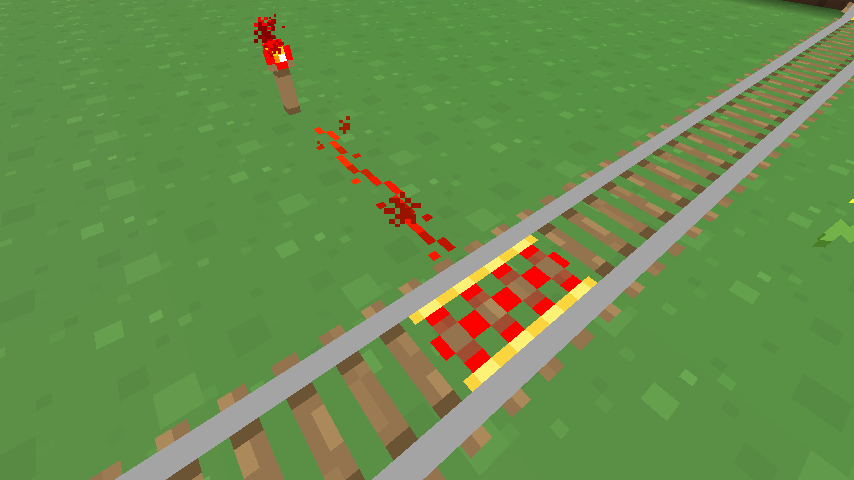 The question is pretty broad, but I think this Youtube video by EbolaZidane is a good introduction to redstone circuitry. It also covers problems you mention like metal doors and levers on both sides of a block:

You can make a fast flashing redstone circuit without burning it out, you need to direct the power output away from the circut like to a dispenser to make a machine gun and you can also attach a lever to the circut and turn it on to stop the power and keep it from burning out.

You can make a small circut with 3 redstone torches 4 redstone dust and three blocks.

21
How do redstone torches (circuits) work in Minecraft?